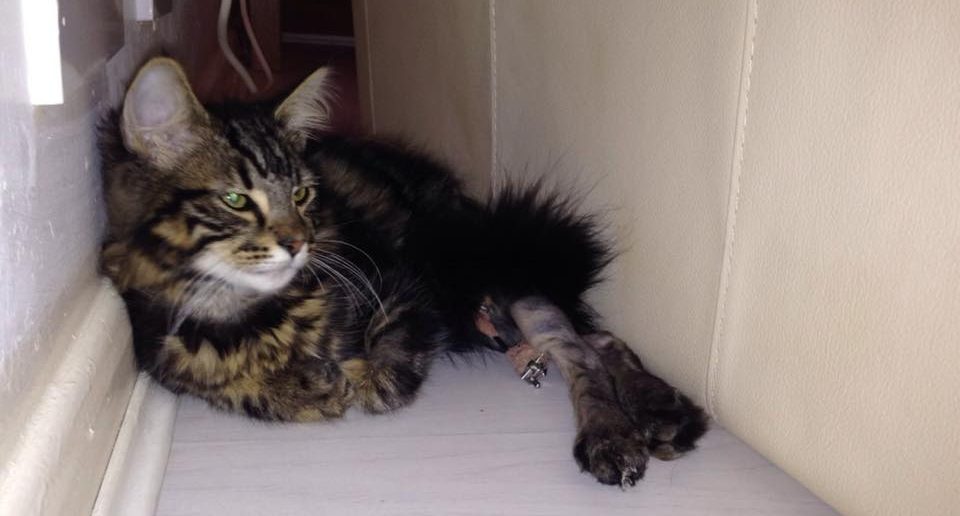 By Nisha Kotecha on May 9, 2016 1 Comment
Monty Recovering from Surgery

A kitten found in a communal bin shed in North London with two broken legs has started a new life across the channel after being rehomed in France by the RSPCA.

Monty the kitten was rushed to Harmsworth Animal Hospital where x-rays revealed he had a fractured pelvis, toe injuries and both his back legs were broken. RSPCA vet Cat Wood operated to carefully pin the broken bones back together in painstaking surgery. 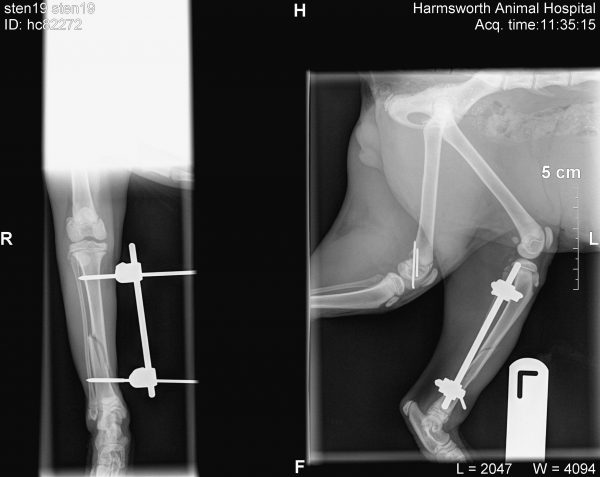 The tiny kitten, who weighed less than 4lbs, needed two weeks intensive care at the animal hospital before he was strong enough to be looked after by a foster carer, a student at the Royal Veterinary College. 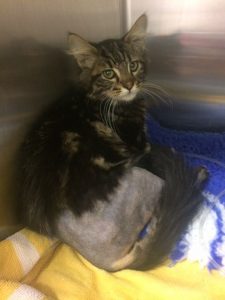 Fellow RVC student, Kathryn Turner, spotted the tabby kitten and knew he would be a purrrrrfect match for her retired grandparents who moved to central France in 2003 and sadly lost their two Burmese cats to old age in recent years.

She said: “My grandparents wanted a cat, when I saw Toby (now called Monty) I knew he was perfect for them. I FaceTimed her on my iPad, that was the first time she got to see him and she was so happy. She fell in love with him straight away.

“My nan is an animal nut. She became ridiculously attached to him. There was lots of FaceTime and I had to send photos of him over to her.

“It was definitely a long-distance love affair.”

Rehoming an animal abroad is not usual practice for the RSPCA. They saw a good opportunity for Monty, and made sure they carried out their usual thorough checks.

Georgina Holding, a rehoming and fostering coordinator at RSPCA Friern Barnet Adoption Centre, explained, “I’ve never heard of an RSPCA cat being rehomed to France before, so Monty is a bit of a first. We were a bit surprised when Kathryn first mentioned the idea but we made it happen.

“Maureen and Dennis sent lots of information about their home and their village and they sent over some lovely photos of where they live. 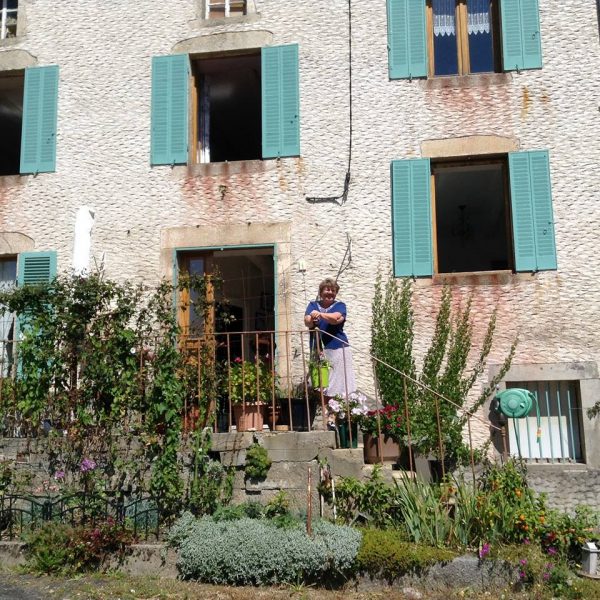 Nan outside the front of the house in France

“They are experienced cat owners so knew what they were letting themselves in for and we were confident that, being a veterinary student, Kathryn could get Monty to France safely.”

Kathryn personally made the trip over to France with Monty. She officially adopted Monty in October last year before transferring ownership over to her grandmother. Kathryn then made the 600 mile trip from Haywards Heath in West Sussex to her grandparent’s home at Christmas taking Monty with her by car.

She said: “Monty was a brilliant passenger. He was perfectly happy, it looked like it was a journey he made all the time.

“There were a few tears of joy when we arrived and Monty made himself straight at home. He’s settled in so well.” 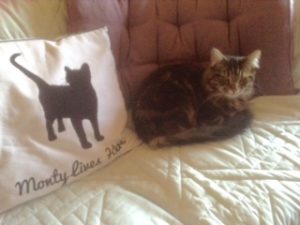 Monty in his new home

Maureen said Monty has settled in well and loves nothing more than tuna dinners and being brushed.

She said: “He comes when I call him in to go to sleep and he curls up on the end of our bed, he has been known to sneak under the covers.

“He has settled in wonderfully. The other cats in the village are probably trying to teach him French. We absolutely adore him.”