A Potential Green Solution for Personalised Transportation in a Congested World

One of the conditions of the electric unicycle challenge was that both participants carry 20KG weights in their backpacks, which is an equivalent of the training Marines are subjected to. 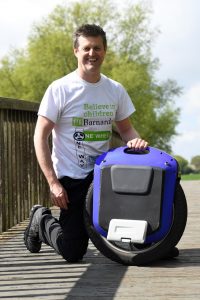 Jonathan and Ian’s endurance challenge was undertaken to raise funds for Barnardo’s projects which aid 250 000 vulnerable and disabled children in the UK and to highlight the breadth of Barnardo’s work across the UK.

Marathon-runner and Barnardo’s South East and Anglia Regional Director, Jonathan, explained that the task of cycling twelve hours with a heavy backpack is ‘like running back to back marathons for 13 days’.

To prepare, Ian and Jonathan undertook several test rides of over 100 miles.

The two unicyclists travelled in remote areas and on unclassified roads, with no days of rest during their challenge.

‘We experienced incredible highs, such as riding across the spectacular Lake District,’ Jonathan recounts about his trip, which started in Mitcheldean, Gloucestershire and concluded at its starting point. However, the two cyclists also experienced some hardships along the way, such as a crash which occurred late one night, which left them fearing that the trip would have to be cancelled. Thankfully Jonathan and Ian managed to overcome this hurdle.

After completing this challenge Jonathan praised the electric unicycle. ‘These devices are a potential green solution for personalised transportation in an impossibly congested world.’

Jonathan and Ian’s route also crossed Dublin, the birthplace of Thomas John Barnardo, Founder of the charity. After Thomas Barnardo moved from Dublin to London he witnessed a cholera outbreak, which killed 3000 people, and orphaned many children who were then forced to live on the street. As a result Barnardo set up a ‘Ragged School’ offering destitute children free education. By the time Thomas Barnardo passed away his charity had opened 96 homes, which cared for 8500 children.

Last year Barnardo’s provided 960 services across the UK to 240,000 children in need.