Seas and beaches across the world are being swamped by the millions of tonnes of plastic and marine litter every year. The issue has attracted attention on an international scale, but one group of volunteers, tucked away on the tiny Isle of Man, have created a way to combat the problem.

Beach Buddies has taken on the challenge and found an effective, sustainable way of keeping their beaches clean that can be used anywhere in the world.

The initial idea that would eventuate in Beach Buddies came back in October 2006 with a walk along the beach at Kirk Michael, on the west coast of the Isle. What started as a lone attempt to clear out this tiny line of coast had, within six weeks, ended with hundreds of bags of rubbish being collected, including over 30,000 plastic bottles, with some of the collected waste being over 30 years old.

Beach Buddies work involves a mix of crowd-funding, viral marketing and community organisation to bring together people who are invested in the future of their local environment in order to lend a hand. The group use a series of steps to build momentum in their efforts, starting with choosing a beach and collecting a few bags of garbage, then publishing ‘before and after’ photographs to generate discussion online. 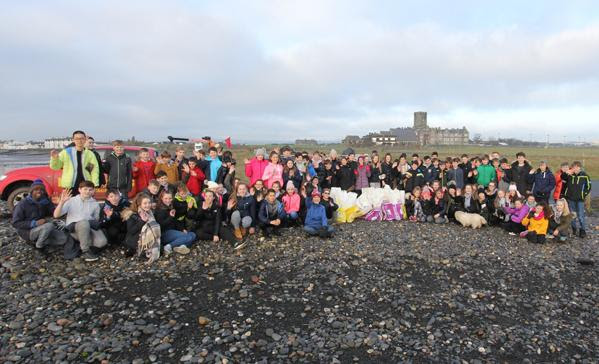 Once the good news is shared and gains traction online, people are introduced to the project and the number of volunteers grows.

“It might seem a daunting prospect to begin with, but the results can be astonishing, and highly effective. Together, we can change the world. By doing nothing, we will never make any changes. It’s not enough to just stand and stare.”

The first Beach Buddies’ Team Event happened early in 2013, where the group was surprised with a turnout of 35 people. But the popularity soon exploded to almost 1,500 volunteers by the end of the year, and by the last count at the end of August 2017, the total number of volunteers had passed another landmark at 8,000. This rate of participation does not even include the “Unknown Volunteers” who routinely fill the allocated Beach Buddies bins dotted around the Isle of Man.

In 2016, the achievements of Beach Buddies were recognised by UNESCO Biosphere as “an excellent example” of how to tackle the problem of marine litter on the world’s beaches. The Beach Buddies has also been recognised for its achievements by receiving an honour from Her Majesty Queen Elizabeth II for “Services to the Marine Environment”.

The charity hopes for the service to be extended to parks, forests, plantations, footpaths, roadsides and eventually all other public areas. With the natural world increasingly under threat, it seems fitting that the innovations of the digital age be used to find a solution, by allowing huge numbers of people to connect and strive towards a common goal of keeping our environment clean.

More information about the group and their efforts can be found here.