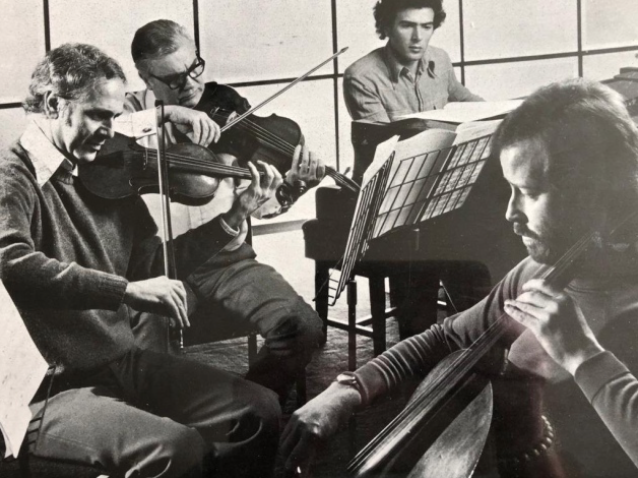 By Zayna Dar on August 19, 2020 0 Comments
The well-reputed chamber musician has worked alongside major artists and contributed towards a film score. Photo: Kenneth Essex family

Kenneth Essex is a prominent violist with an illustrious musical career spanning just shy of six decades. On July 19th, he completed a 10km walkathon divided across 10 days to fundraise for Moorfields Eye Hospital in London, a day before his centennial birthday.

Kenneth is a former member of the Hurwitz String Quartet, founded in 1946 by eminent British violinist Emanuel Hurwitz. The ensemble played the instrumental backing for the iconic Beatles song ‘Yesterday,’ recorded in the summer of 1965.

Kenneth worked on the theme tune for the 70s British sitcom Fawlty Towers, performed at the Royal Variety, took part in several Eurovision competitions, and recorded a solo piece for the soundtrack of the 1981 romantic drama ‘The French Lieutenant’s Woman,’ starring Meryl Streep.

The Muswell Hill resident also played the incidental music for the long-standing British sitcom ‘Last of the Summer Wine.’ His extensive professional experience has made him a highly esteemed figure in the classical music scene.

Kenneth Essex was born on July 20th, 1920, and raised in Hinckley, a market town in southwest Leicestershire. His father was a baker and confectionary manager who encouraged Kenneth to take up violin lessons being offered at his primary school.

Kenneth’s music teachers soon discovered he had a prodigious flair for the viola and he went on to study at The Royal Academy of Music, an elite musical institution and the UK’s oldest conservatoire.

The veteran is presently undergoing treatment for age-related macular degeneration, an eye disease that is the leading cause of vision loss in individuals over the age of 60.

In order to express his gratitude for the eye hospital’s service, Kenneth vowed to walk in two 500m increments a day for ten days so as to traverse a distance of 10km. Not only did he succeed in this endeavour, but he also managed to exceed his fundraising target of £15,000, with the current total standing at just over £17,000.

“Kenneth is an inspiration and we can’t thank him enough for his support. Research into macular degeneration at Moorfields Eye Hospital and the UCL Institute of Ophthalmology will help us understand this eye condition and change the lives of people with sight loss in the UK and around the world.”

On his 100th birthday, Kenneth was sent a letter from the Queen and celebrated this milestone with his close family. He was greeted by his neighbours outside his North London home, as they sang ‘For He’s a Jolly Good Fellow,’ and congratulated him on his fundraising achievements.

Owing to the generous public reception in response to Kenneth’s sponsored walk, he has decided to round his donation target to £20,000. Click here to find out more and to help Kenneth achieve his new goal.