Nearly a thousand 16-25 year olds, in care or sheltered housing, took part in a two year impact study of the charity MyBnk’s ‘The Money House’ project in traditionally deprived areas of London.

Findings from independent evaluators, ERS, found participants were now three times less likely to have unsustainable arrears. There was a 64% drop in evictions for those ‘at risk’ of losing their home.

In the midst of a housing and homelessness crisis, research tells us one in three care leavers currently lose their first home and it costs on average £7,056 to evict a tenant.

After MyBnk’s expert-led intervention there was a: 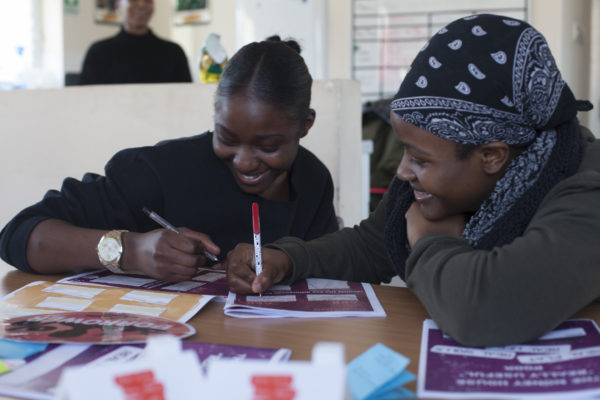 Young people are being given the skills, knowledge and confidence to manage their money, prioritise debts, avoid scams and navigate the banking and benefits system. Photo: MyBnk

There were also large reductions in instances of financial exclusion for those who were unbanked and had never saved or budgeted. 54% were now saving, 35% budgeting and 75% now had a current account and there was a 44% increase in those using online banking.

The homelessness prevention scheme is based in real flats in the Royal Borough of Greenwich, and London Borough of Newham. Over five days young people gain the skills, knowledge and confidence to live independently – learning how to manage their money, prioritise debts, avoid scams and navigate the banking and benefits system. Trainers use ‘escape room’ games, role play and activities mined from youth culture with diary room recordings to help bring money to life.

Now in its sixth year, funding has been extended to 2021 by the Berkeley Foundation and JPMorgan Chase Foundation. Five councils and various sheltered housing providers such as Shelter, Centrepoint, the YMCA and De Paul have made it mandatory for any young person applying for housing.

“Working with vulnerable young people at these transitional periods is crucial,” said Guy Rigden, CEO, MyBnk. “That’s when they are at the highest risk of making the poor financial decisions that can have lifelong consequences. Social and key workers are under immense time and resource pressures to meet the need.

“These results, show investing in young people and the use of expert-led direct delivery of these specialist areas pays back for everyone.”

An investment in young people

The new Children and Social Work Act places a legal duty on local authorities to protect young care leavers’ economic wellbeing and ensure access to financial information. In 2016 The Children’s Society found that almost half of councils in England fail to offer these services.

ERS’ findings strengthen the case for providing trained expert money guidance for vulnerable young people, which is backed by reports from the All Party Parliamentary Groups on Financial Education for Young People, and Ending Homelessness, and the Mayor of London.