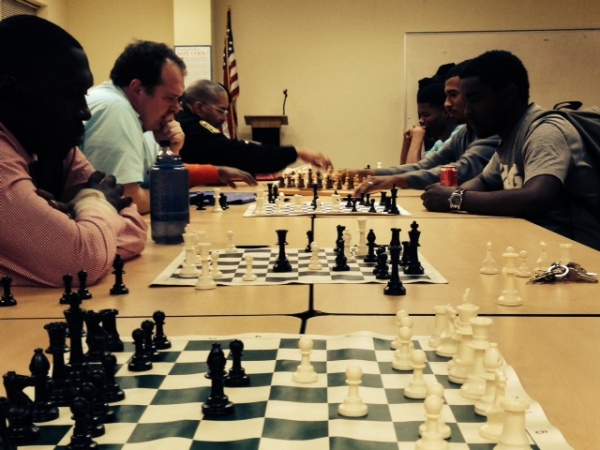 The trustees of the micro-philanthropic group The Awesome Foundation for the Arts and Sciences, Atlanta Chapter have announced the award of their inaugural $1,000 grant toward the creation of awesomeness in the metropolitan Atlanta area. The grant was given to The S.M.A.R.T. Moves Chess Club, a mentoring program for young men.

The chess club was started by Fulton County Juvenile Court Officer, Mustafa Mahdi and the Deputy Chief of Probation, Samuel Washington.  The grant-funds will be used to purchase additional chess boards, game-timers and business-attire for the young men in the program, all from low income single parent homes.

Since the program’s inception Officer Mahdi has personally purchased the chess boards from thrift stores. 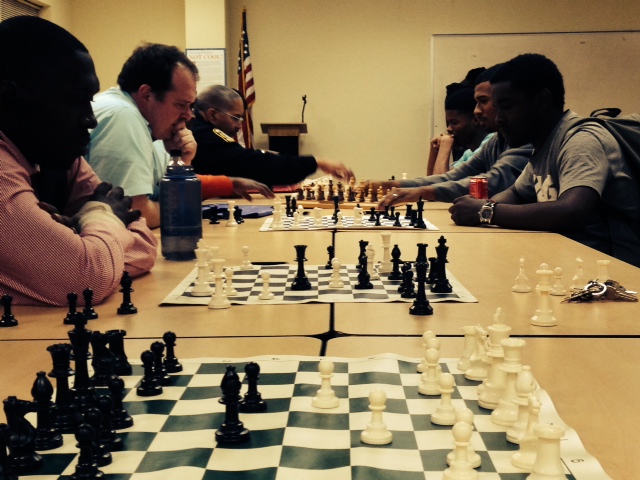 The Trustees of the local chapter of the Awesome Foundation were impressed with what this program has been able to do with no funding whatsoever, “and we wanted to give them an opportunity to see what they could accomplish with a little seed capital. They have big plans on growing S.M.A.R.T, and we’re enthusiastic about helping them along that path,” said Dionne Mahaffey, the chapter’s founder.

“I started this chess club because I am committed to improving my community,” Officer Mahdi said.

“Virtually every teen’s involvement with the juvenile courts began with a history of neglect, abandonment or abuse. During their up to 8 hour stay at the juvenile court awaiting a hearing, I have an opportunity to talk with many of the teens,” he said.

These conversations were the motivation for starting S.M.A.R.T Moves.

“We decided to volunteer our time and resources to the young men that we encounter to teach them to make smart moves in chess and life,” Officer Mahdi continued.

“Most are good kids, dealing with overwhelming environmental and peer pressures, with limited parental supervision, guidance and support. Virtually all are receptive to advice and guidance, but need immediate support and mentoring upon release from detention.”

“Over 90% of these teens come from homes where the father is absent and many teens turn to substance abuse as a means of self-medicating to, in their words, “reduce stress,” he said.

S.M.A.R.T. is an acronym for Science, Math, Arts, Reading and Technology. The program’s mentors are a volunteer force of deputies, probation officers, college students and parents from Fulton County. These dedicated volunteers provide homework help and tutoring weekly. The program currently has 25 male teens attending regularly.

“Our goal is to register 50 teens in the chess program and develop a competitive chess team of reformed “teen leaders” who will share their personal stories of choices, consequences, overcoming obstacles and smart moves with elementary, middle and high school students in Fulton County and Atlanta Public Schools. Many participants are former gang members who can also advise teens how to avoid gang involvement,” added Deputy Washington.

Chess is such a wonderful vehicle for teaching teens to think analytically, critically and to have patience.  Research shows that teens who play chess improve their grades dramatically across all subject areas in school.  “There are a lot of transferrable skills; not to mention the quality time spent with an adult mentor while playing the game,” Officer Mahdi concluded.

Like other chapters of The Awesome Foundation, the Atlanta group will give a $1000 grant each month.

The submission window for the chapter’s second grant will be open from April 1 – April 20, 2014, and the funds will be awarded in May.   The monthly $1000 grant is obtained from contributions by the chapter’s trustees who make a monthly contribution to fund the award. Trustees also vote on the submissions to determine the winner each month. Proposals are simple: 350 – 1500 words submitted using a simple online application that explains why the project meets the foundation’s standard for awesomeness and how the project will immediately impact the city. The chapter is also seeking additional trustees for their board.

About:  The Awesome Foundation for the Arts and Sciences is an ever-growing, worldwide network of people devoted to forwarding the interest of awesomeness in the universe. Created in the long hot summer days of 2009 in Boston, the Foundation distributes a series of monthly $1,000 grants to projects and their creators. The money is pooled together from the coffers of ten or so self-organizing “micro-trustees” and given upfront in cash, check, or gold doubloons. The chapters are organized by a founder and trustees around geographic areas or topics of interest.

The Atlanta Chapter of the Awesome Foundation’s grants will support projects in sciences, arts, education, civic engagement, media, and entertainment — just about anything as long as it contributes to making Atlanta more AWESOME!  501c3 status is not a requirement!  The grants can go to groups, individuals, small non-profit organizations, almost any entity. The group will fund grants every month except July and December.