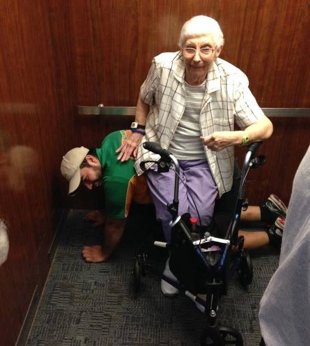 Next time you see an elderly person standing on the train just remember this guy!

There’s good customer service, and then there’s really going above and beyond.

When you see an elderly woman on the subway, the polite thing to do is offer her your seat. But what about when you’re stuck in an elevator with her and there are no seats to be found?

When 23-year-old Cesar Larios, a mover for College HUNKS Hauling Junk, found himself in that situation, he dropped to his hands and knees and let the woman sit on his back.

“We were riding with a very nice elderly women,” said Larios. “As soon as it got stuck the lady said she could not stand for extended periods.”

“I offered to serve as a chair,” Larios told his boss, who contacted the Good News Network with the story. “She was so thankful.”

Larios, a student at the Art Institute of Florida, provided the woman a spot to sit for the next 30 minutes.

A photo of his act of kindness, taken by one of his fellow movers, went viral.

“The response to the picture is mind blowing. Thousands of people are sharing it and posting it on social media,” Friedman wrote in an email to HuffPost. “I think what’s great about it is that it’s a genuine moment caught on camera. A lot of people say the younger generation has lost certain values. But one small picture shows that chivalry and hard work are still very much alive in our youth.”

Even Larios’ mom is a fan:

“He is my son, and yes I am SO PROUD of HIM,” Olga Lourdes Ruiz Velasco wrote on the Good News Network Facebook page in response to the comments praising her son.