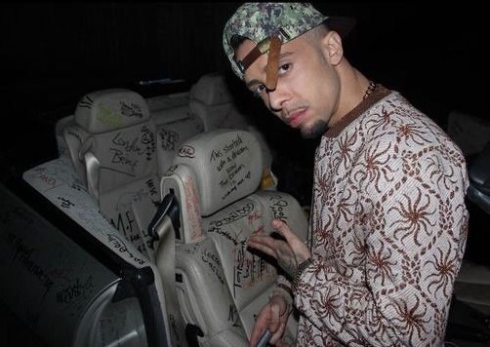 By Nisha Kotecha on May 18, 2014 0 Comments
Dappy has endorsed the campaign

A chance encounter with Samora Roberts, aka “Black Dee” from TV documentary Benefit Street has led to a former lorry driver from Harlesden to launch a campaign to crackdown on youth crime, The Kilburn Times has reported. Mac Ferrari-Guy, 31, has driven across the country and collected more than 6,000 signatures on a vehicle – his £9,000 prized Six-series BMW car – which he plans to auction off to raise funds for a project to keep vulnerable children away from the clutches of street life.

His “The Write Off” campaign was kick-started after he met “Black Dee”. He said: “She told me that they are not the ones that need help but it’s the youths who need it. This is not a gimmick, it’s a passion. A lot of our children feel oppressed; a lot feel like they can’t talk to anybody.”

Just two weeks into the campaign, Mr Ferrari-Guy’s mission is turning heads, and is also receiving celebrity support with a string of celebrities – including hip-hop rap star Dappy – signing his car.

He said: “Everyone looks and at first they think my car has been vandalised. After that they asked me why I’m doing it. I have not had one negative comment about it. Everyone thinks it’s great.”

“It is a visible petition that represents how communities feel. We need to do more for these youths.”

Mr Ferrari-Guy said: “I have a teenage relative who is getting into of trouble. I don’t want him to go down that road and I can’t be there 24 hours a day to help keep him off the streets. We need more youth centres and more passionate teachers to help our youngsters.”

The money he raises from the campaign will go towards opening more youth centre across the capital and he hopes this will become an annual event.