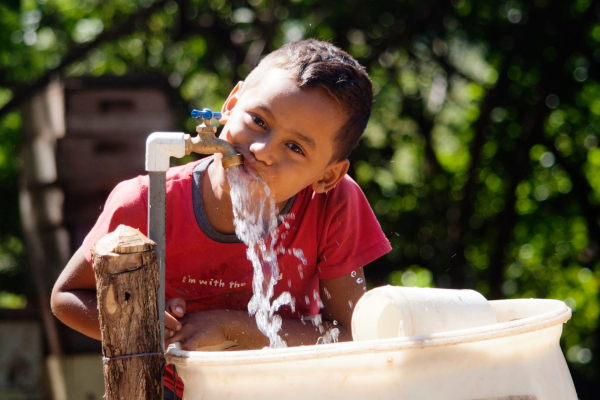 Pipeline Puts An End To Arsenic Poisoning In Nicaraguan Communities

For two communities in Western Nicaragua, being displaced by the devastation of Hurricane Mitch in 1998 was not the end of their worries. Unión España and Nuevo Amanecer were resettled near the city of León and given a new start. However, in 2007 arsenic was detected in their water sources. Drinking arsenic-contaminated water over a long period of time can cause a range of serious health problems such as skin cancers, respiratory diseases and liver failure. With symptoms taking between two and ten years to develop, the problem had simply gone unnoticed and over one thousand people were gradually being poisoned.

After a thorough investigation into the extent, causes and effects of arsenic poisoning, Nuevas Esperanzas – a UK registered charity – set about developing a project to tackle this problem. With the arsenic in the area naturally occurring and mostly related to geothermal activity, it was never going to be simple. The problem was compounded when no uncontaminated sources were discovered in the surrounding area and filters to remove the arsenic were unsuccessfully piloted. The solution would have to come from further afield. 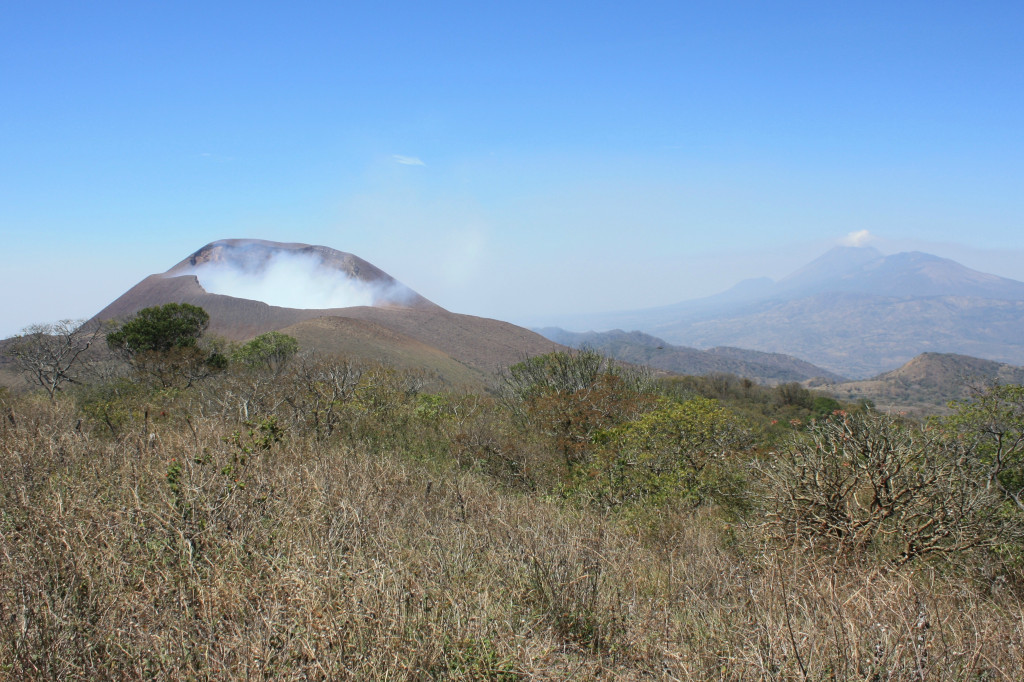 Unión España and Nuevo Amanecer lie at the foot of the Telica Volcano. The naturally occurring springs on its slopes provide clean water, but it becomes contaminated and infiltrates the ground again before it reaches them. Nuevas Esperanzas began exploring the possibility of piping water from one of these springs to the two communities, but the only suitable source lay some 4 kilometres away. Although this source is clean, it would only supply these communities with enough water for drinking and cooking. It became apparent that a two-step solution was required to meet all their needs.

So Nuevas Esperanzas briefly turned their attention back to the arsenic-contaminated sources. In a water-stressed country which endures a five month dry season, even these sources are useful for washing and bathing. In 2011 the two communities set about laying 8 kilometres of pipe and installing a new electricity supply. By 2012 they had naturally heated water, albeit contaminated with arsenic, piped to their doorsteps. Although this did not solve the arsenic problem, it at least prevented them from having to walk long distances to collect water for washing and bathing. 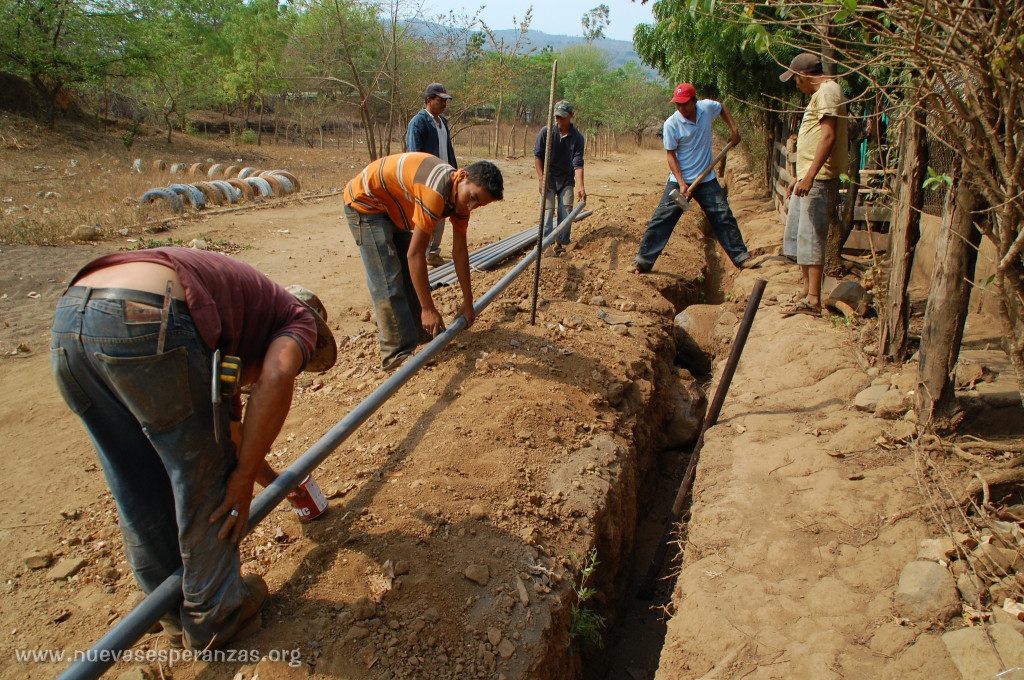 In the second phase of the project, Nuevas Esperanzas returned to the uncontaminated source up on the volcano to provide them with clean water for drinking and cooking. Once the proposed pipeline route was surveyed for the first time, the scale of the project became apparent. The pipeline carrying 100,000 litres of water a day would need to drop 300 metres in elevation. It would have to pass through a 600-metre long canyon and would need 11 suspension bridges to cross the treacherous terrain.

After building supervisors and community members received training in basic climbing techniques, the team set to work. With steep slopes, loose rocks, and occasionally near vertical drops to contend with, the workers had to get used to operating in harnesses. Boulders had to be cleared and paths created before work on the pipeline itself could even begin. 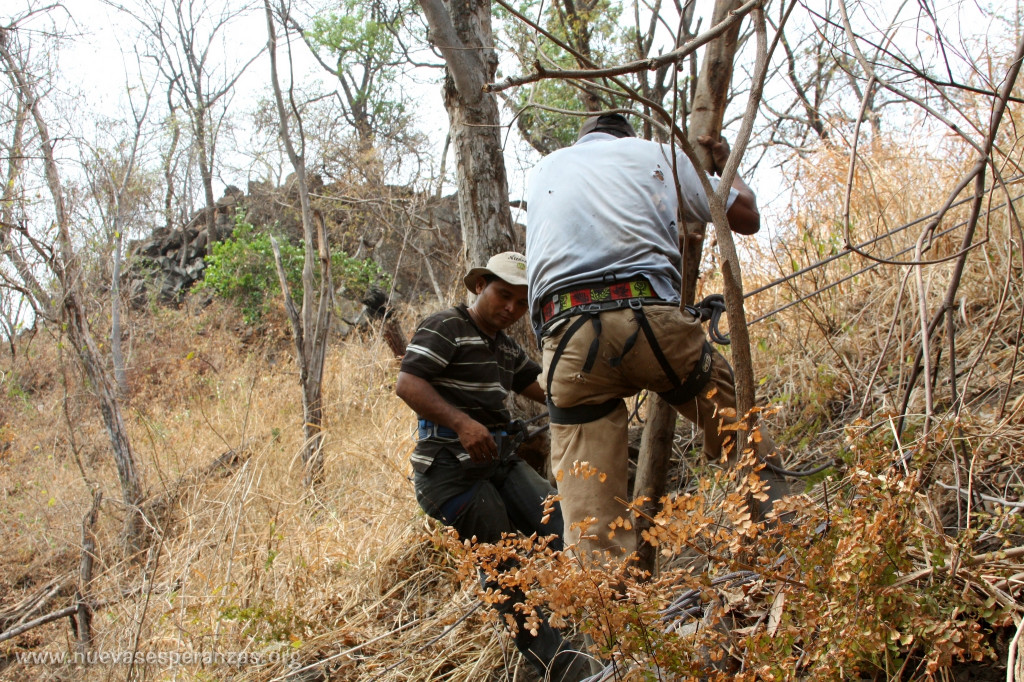 Where possible the 2-inch pipe was anchored to the slope. Where not, suspension bridges were needed. Spanning 67 metres, the longest bridge was built in the least accessible part of the canyon and required more than 15 tonnes of reinforced concrete at each end to support the columns and anchors. 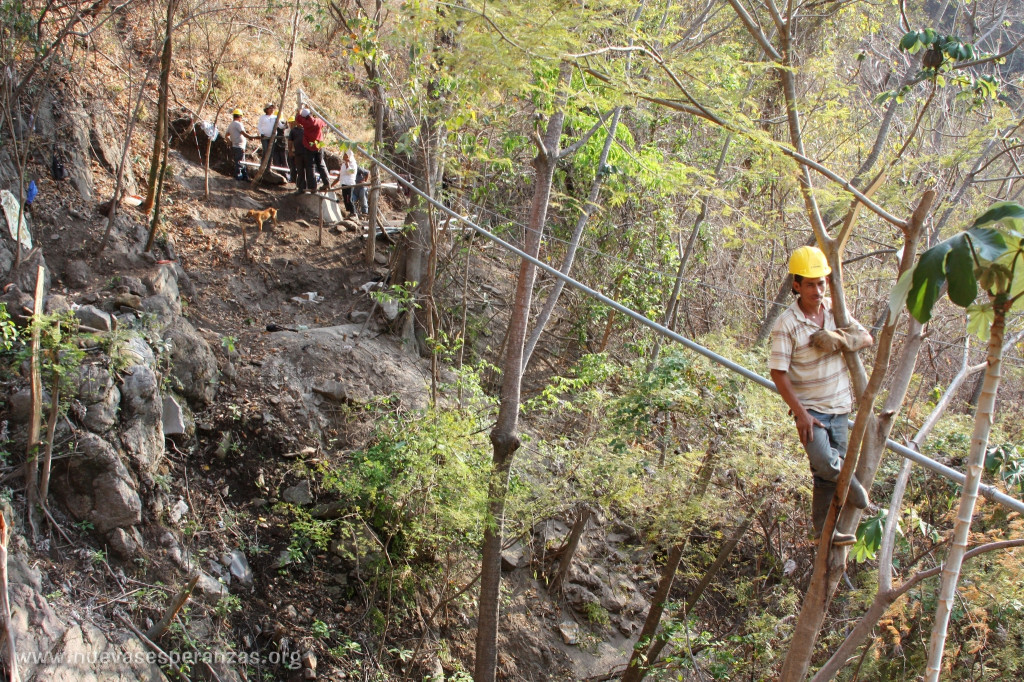 By the time the pipeline made it out of the canyon and onto more stable ground, most of the hard work was complete. And having achieved something that four months earlier had seemed impossible, the team could now reevaluate the scope of the project. With the spring yielding more than initially expected, Director Andrew Longley began to examine the potential of the pipeline serving a third community on its way past. 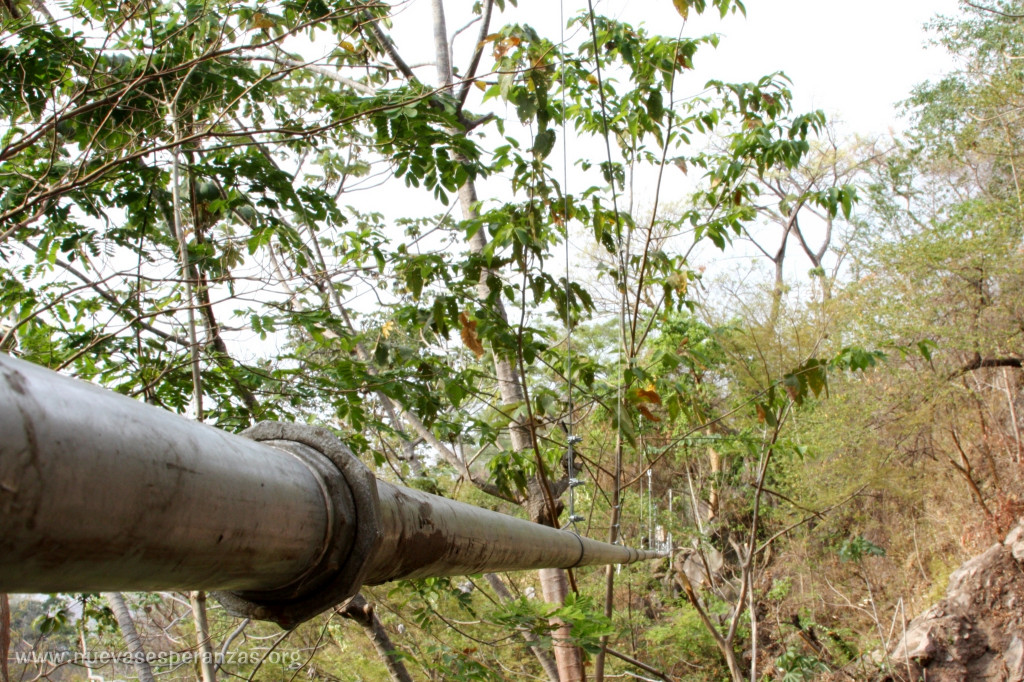 Although not effected by the arsenic contamination of lowland areas, the 24 families in El Caracol face a daily struggle to find enough water to meet their most basic needs. They often have to travel up to 2 kilometres to collect it. When they found out that the pipeline would benefit them as well, they got to work straight away and enthusiastically dug the trenches needed to carry the pipes to their homes. By the end of 2013, each family had a tap with running water outside their front door.

For this hillside community, having larger quantities of better quality water eliminates the long and tiring daily walks previously needed to collect it. Now it is easier for them to maintain good hygiene and they have more time to dedicate to farming, family and education. 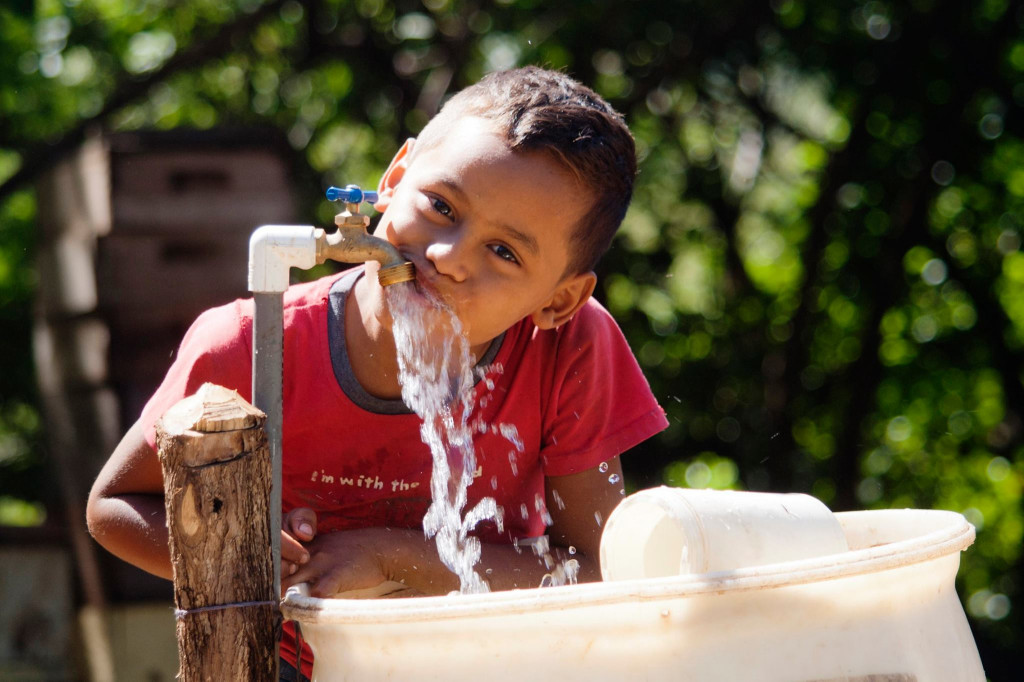 After this short detour, the final 3 kilometres of pipe down to Unión España and Nuevo Amanecer were completed in just a few weeks. Ten months after the pipeline was started, and three years after the project was conceived, these two communities of over one thousand people now have running hot and cold water, significantly reducing the chance of further poisoning.

With the three communities establishing a water committee to ensure the upkeep of their new water supply, there is every hope for the long-term sustainability of this project. With the spring still providing an excess of water, Nuevas Esperanzas is now investigating whether the pipeline can be extended still further. What has been their most ambitious and successful project to date could benefit still more people without access to clean drinking water.