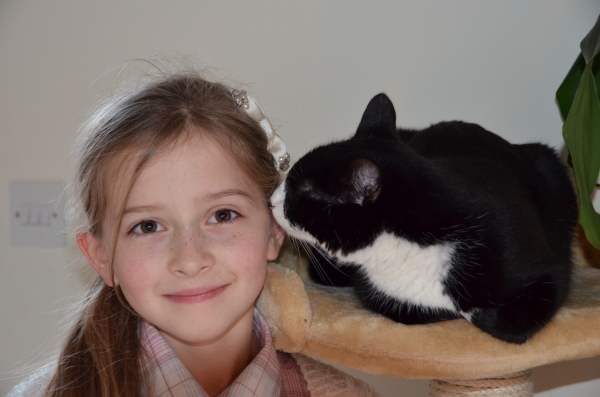 A rescue cat left dumped in a box outside a shop has proved to be the purrrrrrfect pet by raising the alarm when her young owner’s blood sugar levels dip to dangerous levels.

Pippa was adopted by the Jansa family from Whitstable in Kent who were won over by her friendly nature and gregarious character.

Little did they know the black and white RSPCA puss would give them more than just love and cuddles – Pippa appears to have the special ability to detect when her eight-year-old owner is about to suffer a hypoglycemic episode due to her diabetes. 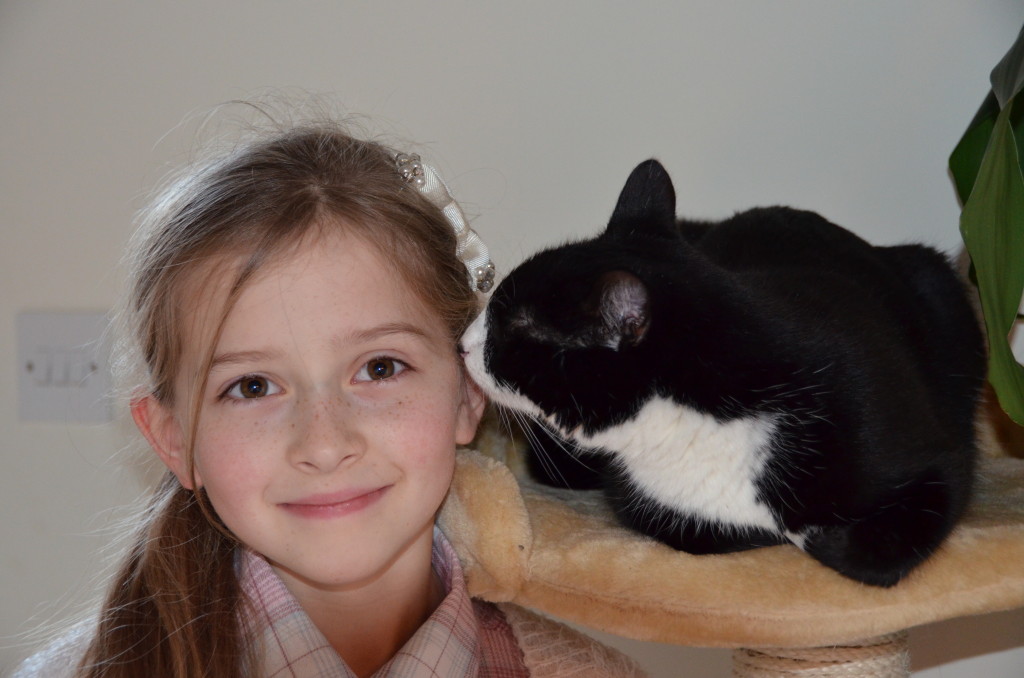 Mia with her “special cat”

Pippa’s incredible gift came to light when she crept into Mia’s room and woke her up in the middle of the night prompting the schoolgirl to test her blood sugar levels which showed they were dangerously low.

And when Pippa couldn’t get into the schoolgirl’s room to check she was feline fine, the persistent puss woke up her mum, Laura instead.

Mrs Jansa said: “We quickly realised she was warning us. If Mia didn’t wake up, then she would come to my door and miaow. She comes onto the bed, walks onto my pillow and across me until I wake up. She really makes her presence felt, she won’t take no for an answer. She knows it’s important that I get up and help Mia.”

Beth Hixson, manager of the RSPCA Canterbury and Dover Animal Centre said: “Pippa was dumped in a box outside a shop in Dartford. She has such a sweet nature but I couldn’t believe it when I heard how she is helping Mia, I got goosebumps, it’s so amazing.

“She is one very special cat, she obviously has a very close bond with Mia.”

Mia has type one diabetes, an incurable condition, which she manages by regularly testing her blood sugar levels and injecting herself with insulin. She was diagnosed with the condition at the age of 6 when her parents were concerned that she was eating more than before but not putting on weight.

Pippa joined the family in August in 2013 when they adopted her from the Canterbury, Dover and district branch of the RSPCA.

Mrs Jansa said since October the four-legged night nurse has alerted her about 20 times when Mia was in the early stages of having a hypo.

“I know there is a charity that trains dogs to detect hypos for diabetics but I’ve never heard of a cat doing it. Pippa is amazing, because she does it of her own accord and without training. We don’t reward her with treats or food because we don’t want to encourage false alarms but she gets plenty of cuddles instead.”

Alice Potter, pet scientist at the RSPCA, said: “Although dogs alerting their owners to medical problems such as epilepsy, cancer and dangerously low blood pressure is well known, the RSPCA is not aware of any evidence in cats.

“Perhaps Pippa will be the cat to inspire new research in this area.”

Mia’s mum added: “We are working with the doctors to stop Mia’s night hypos, but in the meantime I sleep a bit easier knowing that Pippa is around. It is so nice to have that back-up, it’s really reassuring and certainly a bonus we were not expecting.

“It give me extra peace of mind to know someone else is keeping an eye on Mia. It’s helps me sleep better at night.”

She added: “Mia thinks Pippa is pretty amazing, she is very happy to have such a helpful cat, however she doesn’t want to be dependent on Pippa, she knows how important it is to be responsible for looking after her own health.

“Mia calls her ‘my special cat, my little protector’ and she’s got a soft spot for her.”