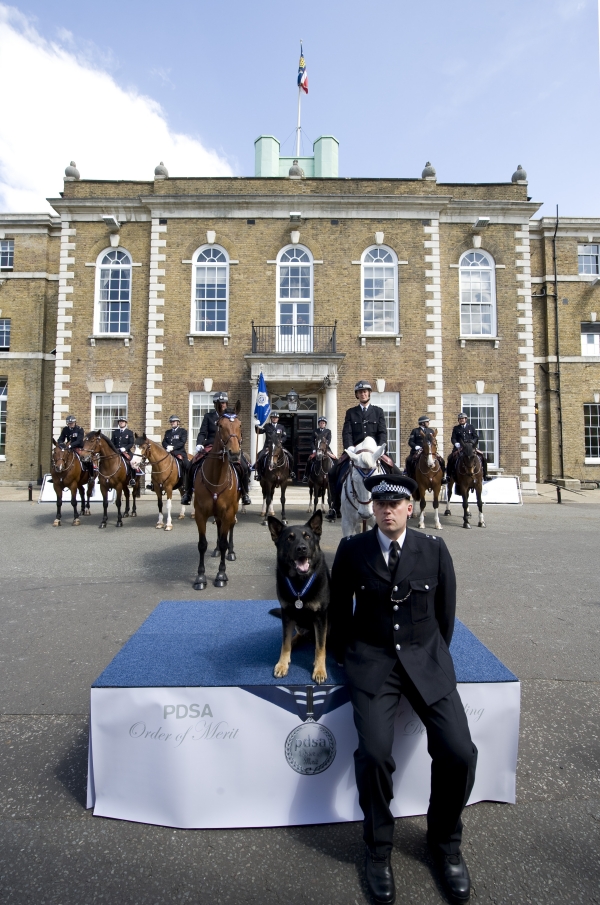 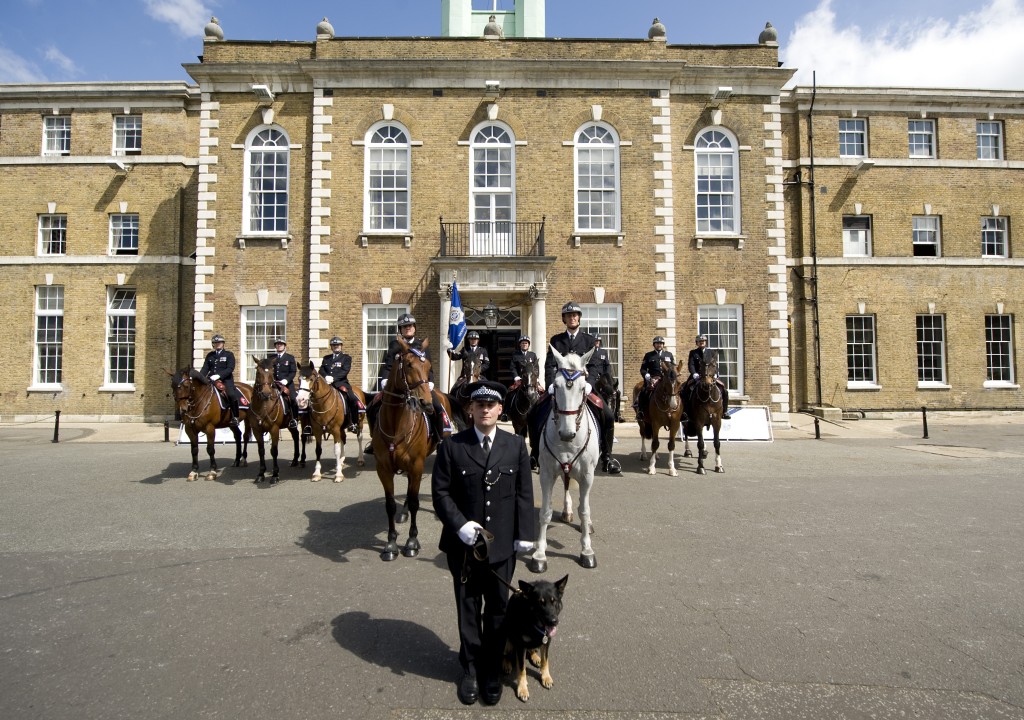 The ‘remarkable’ actions of Metropolitan Police horses and dogs that safeguarded life and property during the London riots in August 2011 were honoured recently with the inaugural presentation of the PDSA Order of Merit – the animals’ OBE. Like the OBE, the PDSA Order of Merit recognises distinguished excellence through service to society.

Ten horses and one dog representative have become the first recipients of the PDSA Order of Merit, introduced by veterinary charity PDSA, to recognise outstanding acts of devotion. It is the first time the animals have been formally recognised for their dedicated work during the public disorder, which included protecting the public, the police and fire fighters.

The animals were presented with their awards by PDSA Patron, HRH Princess Alexandra, at the The Honourable Artillery Company in London.

The horses
During the disturbances, the horses were confronted with burning buildings, falling debris and missiles. Countless bricks struck the horses’ chests and hindquarters in a situation more extreme than any training could have prepared them for.

Despite the heat, noise and chaos, the horses stood their ground, helping restore order to the streets and bringing protection and reassurance for communities affected. The police horses also ensured that the fire service, who were also under attack, were able to reach those buildings on fire and check if anyone was still inside.

Two police horses in particular, Boris and Laurel, went ahead into the dense acrid smoke and noise, and their confidence allowed the other horses to follow. 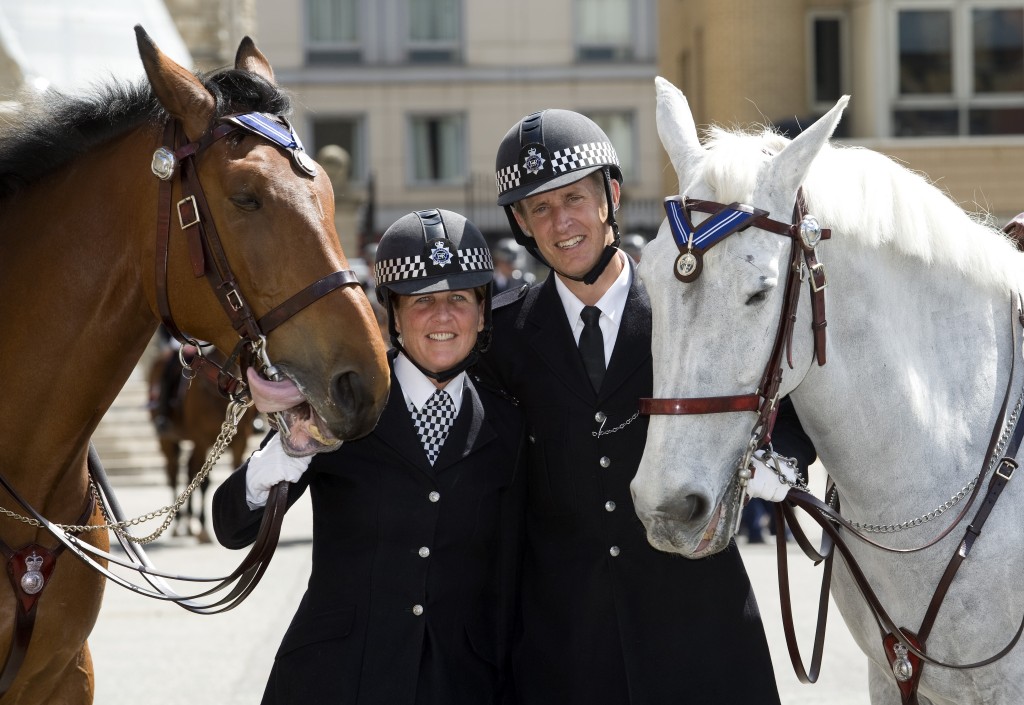 During the riots, the horses worked for hours on end with only a 20-minute break for water. They were close to exhaustion when they finally stood down.

None of the horses had experienced anything on the scale of the riots before, especially Laurel who had only been classified as an operational horse just days before the riots. Boris, who according to his riders has a lovely calm nature, has performed many ceremonial escorts during his time with the Metropolitan Police and most notably was part of the escort for the Royal Wedding of the Duke and Duchess of Cambridge.

The dogs
Metropolitan police dogs were also called into action during the disturbances in various locations around the capital. 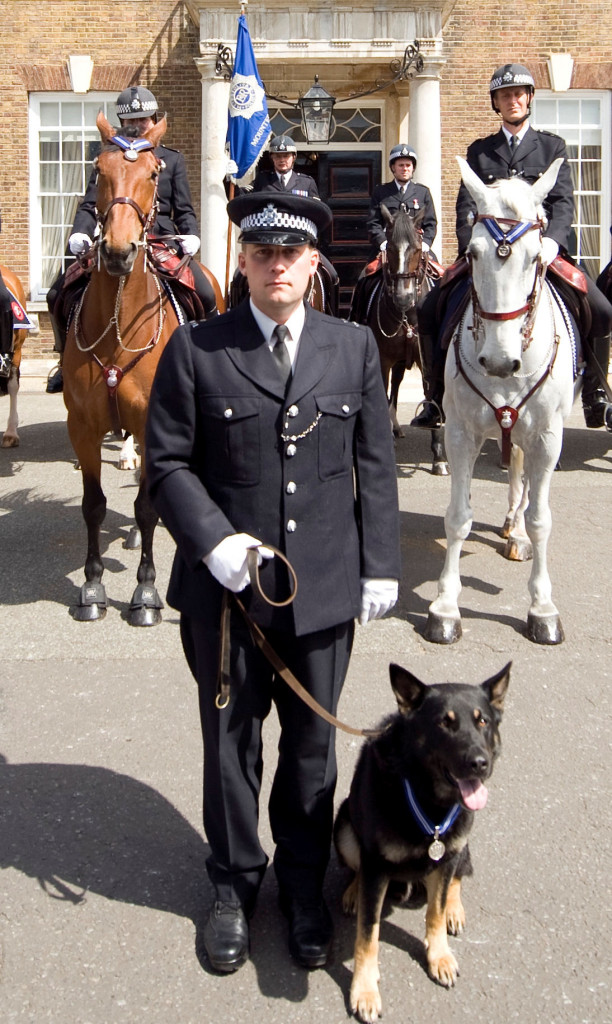 Many of the dogs sustained injuries from the constant hail of missiles directed at them. One in particular, Police Dog Linpol Luke – affectionately known as Obi by officers – suffered a fractured skull. Obi received the award on behalf of all of the dogs that served during the riots. According to his handler, Phil Wells, Obi is a colleague and partner: “He’s one of the team; at the top of his game and a leader in his class with a finely tuned nose. But once home he’s part of the family, a gentle giant and a cuddly bear. “

Over several days the dogs and handlers were repeatedly deployed to assist Police Support Units working tirelessly to protect the public and property.

Metropolitan Police Chief Inspector Ade Adelekan said: “We are honoured that our horses and dogs are to be the first recipients of the PDSA Order of Merit*.

“Had it not been for the deployment of police animals, their handlers and riders across London, there would have been significantly more harm caused to our communities and to the officers trying to restore order to the streets.”

The dedicated actions of these animals were greatly appreciated by the communities they served, which was evident by the many local shopkeepers and residents who brought out water and food for the animals, to help sustain them.

Commenting on the award, PDSA Director General, Jan McLoughlin, said: “Today we pay tribute to some truly exceptional acts of devotion. The extreme situations these animals faced exceeded anything they had experienced before. It is testament to their character and steadfast resolution that they have become the first recipients of the PDSA Order of Merit.

By creating the PDSA Order of Merit we can ensure that extraordinary animal contributions to society can now be properly recognised and honoured, however and wherever they occur. Their contribution to society is broad, be it police dogs protecting the public, to dogs visiting the elderly in nursing homes providing therapy and companionship.

As well as the companionship they bring to millions, animals serve and protect us in so many ways. This is why we have created this important new medal.”

PDSA honours animals that save human life when their own life is in peril through the PDSA Dickin Medal, instituted in 1943, which recognises acts of gallantry in military situations; and the PDSA Gold Medal, the animals’ George Cross, instituted in 2002 which is its non-military counterpart.

For more information about the PDSA Order of Merit and its first recipients visit www.pdsa.org.uk/heroanimals.