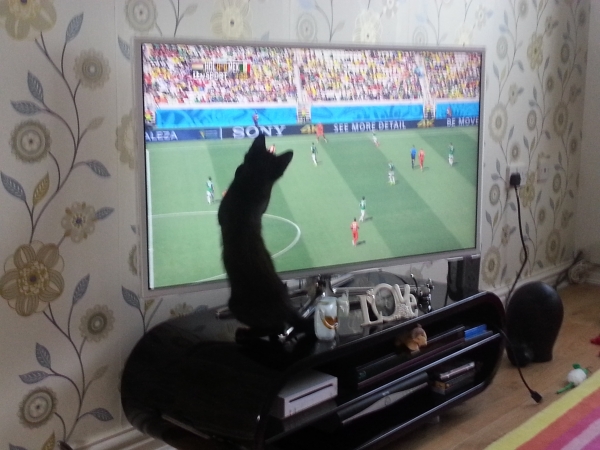 A homeless kitten named after footballer Lionel Messi is living up to his name by showing a surprising interest in the World Cup. The feline Lionel has demonstrated his skills by avidly chasing the ball around the television screen during matches.

The four-month-old kitten was found as a stray and brought to the Blue Cross rehoming centre in Southampton in a sorry state. An infection had caused him to become lame in one leg but after receiving treatment Lionel began to make a good recovery.

Once he was feeling better, Blue Cross Rehoming Supervisor Laura Boyle, who was fostering him at home, realised that Lionel had a shared interest with his famous namesake. When she switched on the TV to enjoy a World cup match one evening, she realised that there was no stopping the lively kitten getting involved in every game, tirelessly following the ball around the screen.

Laura said: “Lionel was in quite a bad way when he arrived, so it’s lovely to see him so full of beans now. We had no idea he would enjoy the football quite so much when we named him after a player, but it has turned out to suit him perfectly – he’s glued to the screen during every match!”

The Blue Cross have found Lionel a new home, where he has settled into in time for the World Cup final. Lionel has been warming up for the weekend of World Cup football by playing football with his new owners’ 3 year old son!