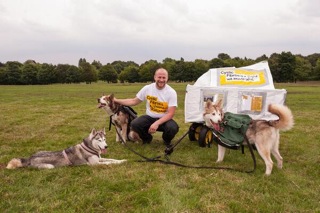 We love hearing stories about fantastic individuals doing something out of the ordinary to support charities! On the 18th of July, Manchester based Keath Armstrong will do just that, by beginning a unique journey across England to raise money and awareness for cystic fibrosis.

32 year-old Keath is moving house to Dorset – but he’s not just renting out a few removal vans and heading there like most of us would. Instead, Keath will walk the 217-mile distance pulling a hand-made sled, helped by his three pet huskies.

Keath was inspired to complete this remarkable journey after the loss of his close friends, brothers’ Carl and Richard Jones who both died from cystic fibrosis, a disease that slowly destroys the lungs and digestive system, in 2006 and 2013 respectively.

Keath explains: “I grew up with Richard in Dorset and now I’m moving back I wanted to do something challenging and different to make more people aware of cystic fibrosis and raise as much money as possible. Richard and Carl were brilliant, you couldn’t fault their outlook on life and despite everything they had to put up they were always there for other people.”

It is hoped that Keath will be able to complete this inspirational journey in 9 days by walking 24 miles a day. He has been training with his huskies, Sakari, Nukka and Nala, by walking in the Cumbrian fells. The home-made sled will carry Keath’s tent, cystic fibrosis posters and special food for the huskies.

Keath is aiming to raise at least £1000 for Cystic Fibrosis Trust, a charity that aims to beat the disease by raising money to develop better treatments and invest in cutting edge research.  If you’d like to sponsor Keith for his brave and commendable efforts, visit http://uk.virginmoneygiving.com/keatharmstrong

Good luck to Keath and his huskies!