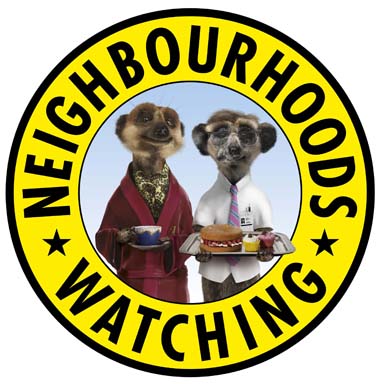 Meerkats have taken over the Neighbourhood Watch logo as part of a new campaign to mark the charity’s 50th anniversary.

The organisation’s yellow and black window stickers have been rebranded to feature Aleksandr and Sergei, stars of the Comparethemarket.com adverts.

New and existing members will be able to order the special edition stickers as Neighbourhood Watch aims to bring its message to a wider audience.

It comes after research found one in 10 people cannot name any of their neighbours, although almost one in four (24%) said they would be keen to socialise if they had the opportunity to get to know them.

Some 65% agreed neighbourhoods would be stronger if people were encouraged to get to know each other better.

Jim Maddan, chairman of the Neighbourhood And Home Watch Network in England and Wales, said: “We’ve seen a real change in the structure of neighbourhoods over the years with people moving further away from their extended families and an increase in short term rental contracts.

“This move can leave some people feeling lonely or unsupported, especially young families and the elderly, who hugely benefit from having a strong community and neighbours to rely on in times of need.”

Helen Phipps, head of home insurance at Comparethemarket.com, said: “It’s our belief that people still want to feel part of a strong community and we’re working with Neighbourhood Watch to encourage small gestures that can have big impacts.

“It’s the little things, such as greeting your neighbour with a simple ‘hello’, that can make such a big difference to someone’s environment and peace of mind at home.”

The special edition stickers will be available to order from the end of July. For more information, visit www.ourwatch.org.uk.

Watch a video from the official launch in Cheshire on Tuesday 15th July: