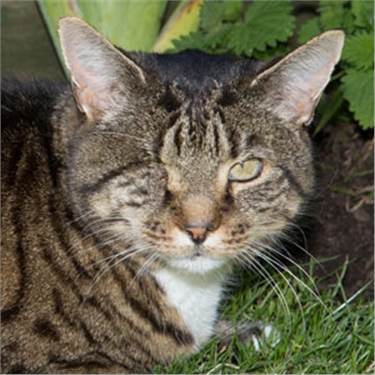 Twenty-year-old Nelson was named overall National Cat of The Year after winning the Most Incredible Story category at an awards ceremony at The Savoy in London.

The plucky older gent has used up a fair share of his nine lives during an eventful life. Callously thrown into the sea in a sack with his litter-mates, he survived when a fisherman plucked him from the waves.

Tough times followed as Nelson spent 15 years living rough on the docks at Seaham Harbour, County Durham, with only the shelter of a fisherman’s cabin to protect him from the bitter elements.

Having lost an eye, dodged dog attacks and endured a gang throwing rocks at him, Nelson was eventually scared away from his home when heavy machinery was brought in to start building work on a new marina.

But he hit the jackpot in 2009 when the Huntley-Crow family, who had heard about his eventful life from fishermen, took pity on him and took him to to live at their home in nearby Seaton Village.

In January this year Nelson was diagnosed with an inoperable heart tumour, but despite a bleak prognosis he has amazed vets with his zest for life.

Nelson was chosen by a panel of celebrity judges including model Lucy Pinder, actress Lesley Joseph and newsreader Jan Leeming to win the title.

Before being named overall National Cat of The Year, he was picked as the winner of the Most Incredible Story category by celebrity judge Paul Copley, best known for his role as Mr Mason in Downton Abbey. Paul said: “To survive all that he has and still be able to trust humans is quite something!”

Nelson’s owner Andrea Huntley-Crow said: “We used to visit the harbour and the fisherman would tell us all about his tough life. He had some shelter in the fisherman’s cabin, but certainly none of the comforts of a home.

“He had to contend with a lot, the threat of dog attacks and gangs that threw rocks at him, which may be how he lost his eye, not to mention the bitterly cold winters. To do that for 15 years is quite something, and we’re just pleased he now finally has the warm, loving home he deserves.”

Nelson beat four other finalists to take the top prize – pub cat Legz, who has helped bring communities together; loyal Cleo, who stayed by her owner’s side when he suffered a heart attack; caring puss Elias, who helps his owner break free from bouts of Post-Traumatic Stress Disorder; and Mr Chips, who has helped his owner cope with a serious medical condition.