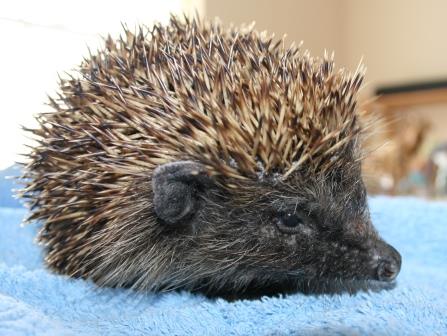 Amazing Animal of the Month: Barstool the Hedgehog

A bruised and battered hedgehog is being looked after by a wildlife charity after having an operation to amputate one of its legs.

Named Barstool, because he now has three legs, the hedgehog has also only got one eye and had to have a loose tooth removed. He was found in a garden in Northgate, Crawley by a resident who saw that he was limping. She called Horsham wildlife charity Care for the Wild who took the little hog to Arthurs Lodge Vets in Brighton Road where his broken and dislocated leg was amputated.

Tarnya Knight, wildlife carer at Care for the Wild, said: “The poor little thing has obviously been in the wars, so maybe we should have called him Lucky.

He was lucky that a kind member of the public spotted the distress he was in, and he’s been lucky to find a vet who would perform this operation. He won’t be able to go back into the wild because of his disabilities, so now he’s with me until we can find a good home for him to go to.

“It’s hard to know exactly what happened to him, but there are some likely suspects. He could have been caught in garden netting, and wrenched his leg trying to escape. If you’ve got netting in your garden, please try and make sure it’s at least a foot off the ground so hogs can’t get caught in it.

“Strimmers are another enemy of wildlife, and injuries from them can obviously be nasty, and often fatal. If you are strimming, please take a moment to check that nothing is hiding in the long grass or undergrowth, and you could well save a life. Another risk to hedgehogs are slug pellets. They may contain methaldehyde which will kill a range of wildlife, including hedgehogs, so please use an alternative method.”

While Barstool will not be returned to the wild, Care for the Wild are often looking for safe release sites for other hedgehogs. If you can offer a safe location where there are already other hedgehogs, please call the charity on 01403 249832 or email info@careforthewild.com.

For more information on the work Care for the Wild does to Rescue, Protect and Defend wildlife around the world, please see www.careforthewild.com