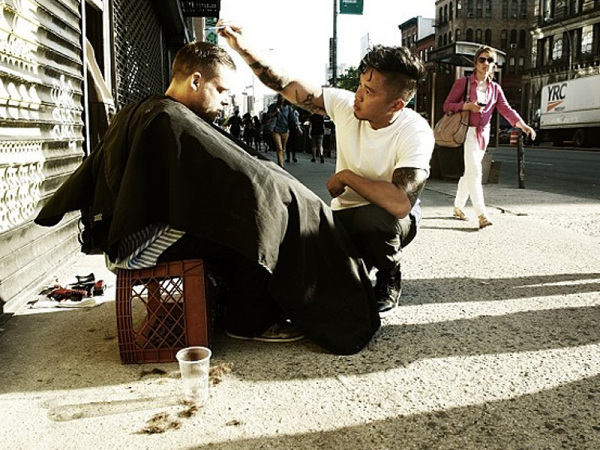 Mark Bustos (above right) works six days a week at an upscale salon in New York City as a hair stylist. He spends his one day off also cutting hair. Every Sunday Mark goes around New York City asking homeless people if they would like a free haircut. He approaches each person with a simple phrase – “I want to do something nice for you today”.

Up to six homeless people are given a free haircut every Sunday by Mark, with many being captured on his Instagram account.

Mark began cutting hair for homeless people in May 2012, following a trip to the Philippines where he gave free haircuts to children.

From all the haircuts given over the past couple of years, Mark told the Huffington Post that one man sticks out in his mind: “Jemar Banks – I’ll never forget the name. After offering him a haircut and whatever food he wanted to eat, he didn’t have much to say throughout the whole process, until after I showed him what he looked like when I was done … The first thing he said to me was, ‘Do you know anyone that’s hiring?'”

Mark cuts hair in open spaces and busy streets so the public can watch and be inspired to also be kind to people who are less fortunate.