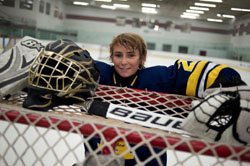 The American pop band OneRepublic, known for chart-topping hits such as “Apologize” and “Counting Stars” have joined the search for a cure for cystic fibrosis with the release of the music video for their hit song, “I Lived.”

The video features 15-year-old Bryan Warnecke of Colorado, who has cystic fibrosis. Despite his rigorous treatment regimen, which includes 40-50 pills and twice per day breathing treatments, Bryan is a double black diamond skier, avid skateboarder, long distance cyclist and one of the best hockey goalies in the state.

Drawing from the words in the song, Bryan says, “I believe in living every second to its fullest, taking the jump without fear of the fall and taking the pain while giving it my all.” He adds, “My dream is to become the first person with CF to compete in the Olympics as the goalie for the USA hockey team. The CF Foundation and OneRepublic are helping to keep that dream alive.”

“We are thrilled that OneRepublic has chosen to feature Bryan and support the 30,000 Americans living with cystic fibrosis through this inspiring song,” said C. Richard Mattingly, Executive Vice President and Chief Operating Officer of the CF Foundation. “The funds and awareness it raises will help us achieve our mission to find a cure for all people with the disease.”

Fans have been posting their support for the video on Twitter using the hashtag #ILived.

Oli Lewington, Engagement Director for the Cystic Fibrosis Trust said, “What a touching tribute from OneRepublic for Bryan and his family. It’s wonderful to see such a high profile and international band devote their latest single ‘I Lived’ to help raise awareness of the struggles people living with cystic fibrosis face. We are delighted that this song has been released from their album and want to congratulate the band for making such a sensitive video which will no doubt help to educate people about living with cystic fibrosis.

The Trust wishes Bryan all the best and we look forward to seeing the song climb the billboard charts.”