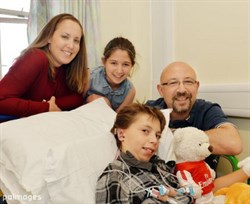 Boy Undergoes Double Ear Reconstruction – Made From His Own Ribs

Kieran, from Hertfordshire, was born with bilateral microtia which affects just one in 100,000 babies and meant neither of his ears had properly formed.

The youngster said he was feeling ‘excited’ ahead the procedure, adding: “I’ve always wanted big ears, and now I’m finally going to have them.”

As soon as Kieran woke from his operation, his parents David and Louise helped him to take a ‘side selfie’ picture of one his new ears to see the results, to which Kieran responded simply: “Wow.”

GOSH consultant plastic and reconstructive surgeon, Mr Neil Bulstrode, carried out the six-hour operation on Kieran on Tuesday 5 August, and is one of only a handful of clinicians worldwide to carry out double ear reconstructions.

“Bilateral reconstructions are sometimes done one at a time, but for Kieran we have created both of his new ears at the same time,” Mr Bulstrode said. “This allows us to ensure the ears are balanced and achieve the best result.”

The procedure began with Mr Bulstrode harvesting rib cartilage from both sides of Kieran’s chest, which he then carefully carved and shaped into frameworks for Kieran’s new ears. In designing them, he used an outline of mum Louise’s ears as a ‘family template’, to make them as close as possible to the ear shape that Kieran might otherwise have inherited from either of his parents.

Mr Bulstrode then grafted the ear frameworks onto either side of Kieran’s head, placing them under pockets of skin that were then sucked down with a vacuum so that the skin conformed to the contours of each new ear.

Kieran has already undergone a separate series of operations to improve his hearing, and while the ear reconstruction is primarily a cosmetic procedure, Mr Bulstrode said it stood to bring enormous benefits to Kieran.

“It’s a major operation but it brings a significant improvement in quality of life for children with microtia,” he said.

“Their confidence improves exponentially and their performance at school improves. If you can improve a young person’s confidence, you can alter their whole trajectory in life.”

Speaking after the procedure, Kieran’s dad David said: “It’s been heart-wrenching for us and we’ve had the moral dilemma all along of whether it’s right to change the features that Kieran was born with. But Kieran has talked about having ear surgery ever since the age of six when he saw a TV programme about it.

“It was very important that this was Kieran’s decision, and I think it’s happened at exactly the right time for his development.”

Kieran will have a follow-up operation in six months’ time which will involve placing a small skin graft behind each ear to help push it out slightly further from Kieran’s head.

Doctors and researchers at Great Ormond Street Hospital and its research partner, the UCL Institute of Child Health (ICH), also hope they will soon be able to perform ear reconstructions for children like Kieran by growing new ear frameworks and other skeletal structures from a child’s own stem cells.

The research at the ICH, funded by Newlife Foundation for Disabled Children, is aiming to allow clinicians at GOSH to use stem cells derived from a child’s own fat to create a new ear, in combination with ‘scaffolds’ that provide the initial support and shape for the ear and are later absorbed.

Dr Patrizia Ferretti, leader of the ICH’s Development and Regeneration Group, who is leading the study, said: “This approach would be far less invasive for a child than the current method of harvesting a child’s rib cartilage. The fact we would be using their own stem cells would also ensure that the new skeletal structures were not rejected by the patient, and would instead grow with the child.”