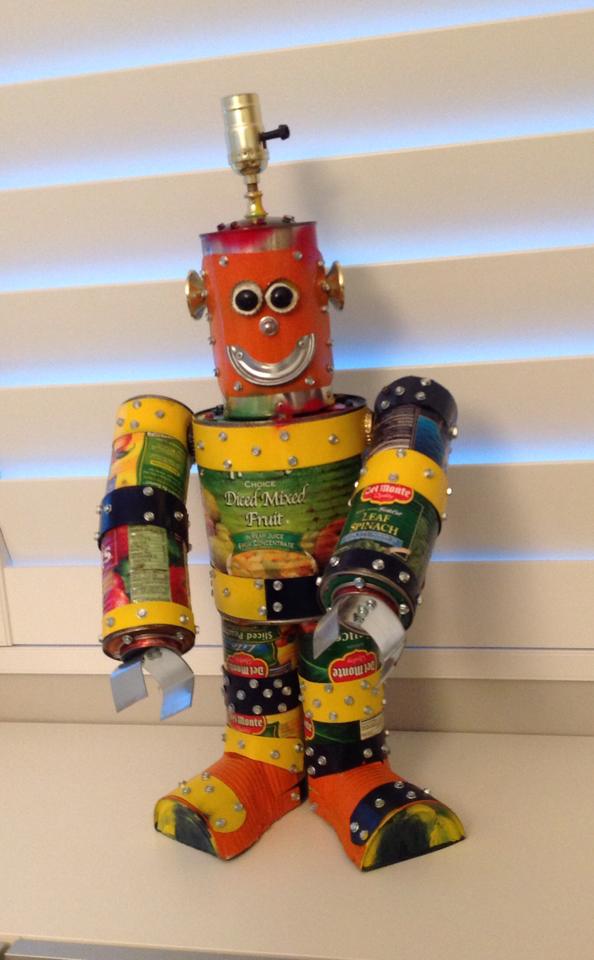 What Do Cooking, Robots and Homeless People All Have In Common?

Has the title got you a little bit intrigued?  What could link cooking, robots, and homeless people together? Don’t worry, it will all make sense soon! Let us start at the beginning..

Alexi DeVilliers or better known by his artist name: “Fish Liptz”, is an artist based in Phoenix, Arizona and he has been feeding homeless people for over 4 years now.

A lot of this story will make more sense by knowing a little bit about Alexi’s upbringing. Growing up in Miami, Florida, DeVilliers’ family lived off of only one paycheck. His mother had to use this single paycheck to feed her 5 children, but she always managed and there was always more than enough delicious food for the family and for a relatively low cost. Alexi’s upbringing can be held partially responsible for the foundations behind his project, but also his compassionate and resourceful nature.

Alexi began the project by realising how much food was left over when just feeding his own family, so much so, that he began to give some of the left overs to various homeless people scattered over Phoenix. This then inspired him and his wife to buy a large sum of frozen meals for the homeless people, costing around 60 Dollars, but only managing to feed 40 people. Alexi then calculated that he could be making much more food to feed more homeless people if he were to cook it himself. However, the one snag in his generous project was, of course, the financial side of things. Since Alexi had begun this project by paying out of his own pocket, the expense of cooking up to 100 meals weekly was quite heavy, financially.

So, to overcome this Alexi decided to put his artistic talents to use; by saving the tin cans from the food bought for the homeless people to make his unique tin can art. Although he was never trained in art, he learned his techniques through his high school tech courses and also a lot of experimentation, and through this he was able to create his quirky metallic structures made entirely out of recycled material.

“Each one of these cans has a story behind them”, Alexi states in a YouTube documentary, in reference to all of the homeless individuals he has managed to feed with his earnings from his tin can art. Most of his structures are unique in some way or another, ranging from dogs to airplanes to sharks and of course, robots! Additionally, the majority of his metallic structures are functioning; for example, he made robots that open up at the back to become lunchboxes-ideal for children! 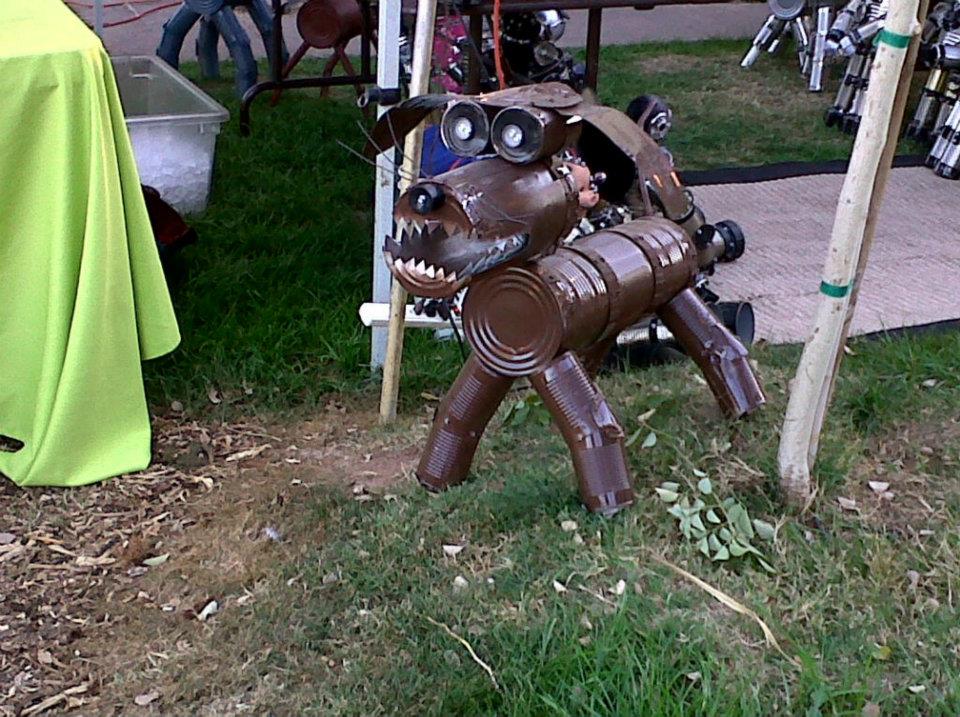 Currently, Alexi supplies all of his cooked meals directly to Justa Center, a place that specifically helps care for elderly homeless people. Every single Saturday he wakes up between 4am and 5am to begin cooking at least 100 meals for the day. The food he mainly makes in bulk is a lot of beans, chicken, stews, casserole-style foods and so on, because it is easier to make and buy in bulk but also because it’s very filling and nourishing. 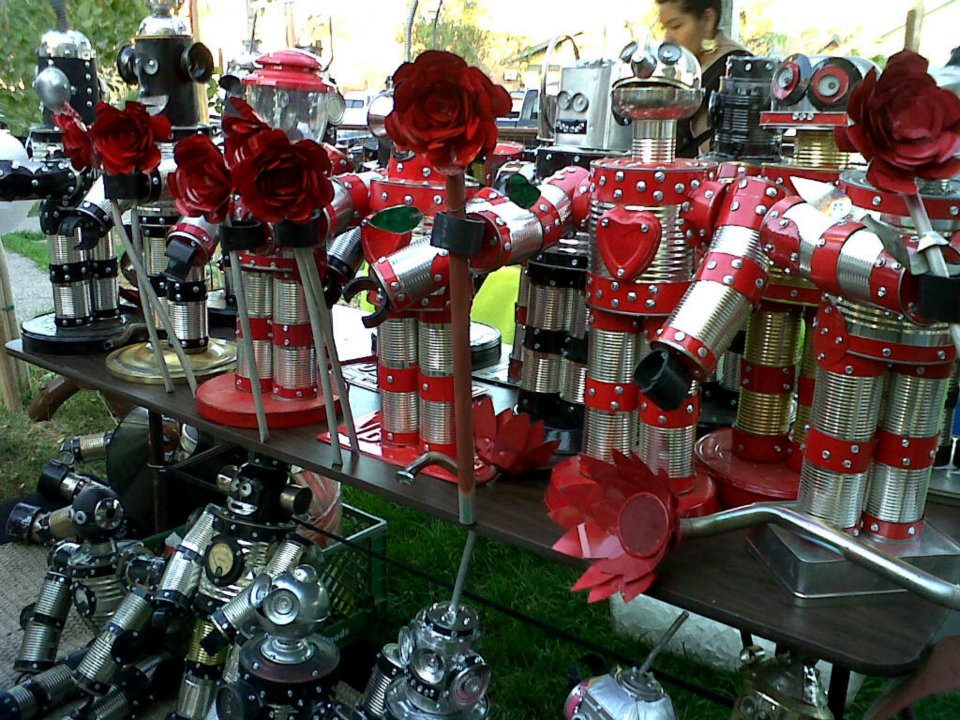 Alexi plans to continue feeding homeless people, but his future plans entail him investing in an empty building that opens up on the weekends as a kitchen to help produce more food for homeless people, where he also plans to hire individuals to work or volunteer. All in all, it is safe to say Alexi DeVilliers has essentially given a whole new meaning to recycling and we can definitely learn from his innovative and incredibly selfless project. 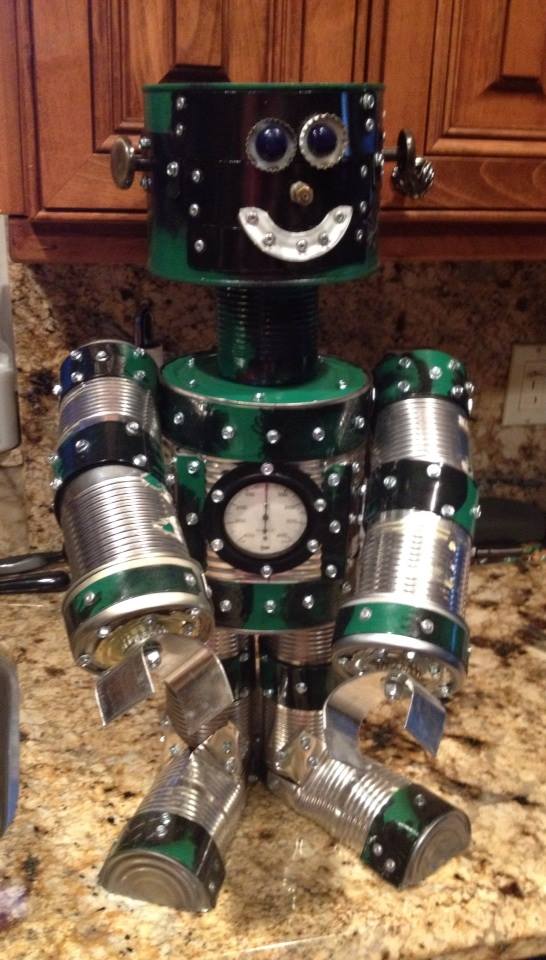 Keep up to date with Alexi’s progress with this incredible project via his Facebook page, “Fish Liptz”

Below is a short documentary about the project, where you can see some of the amazing robots but also Alexi DeVilliers himself discussing his inspirational story: