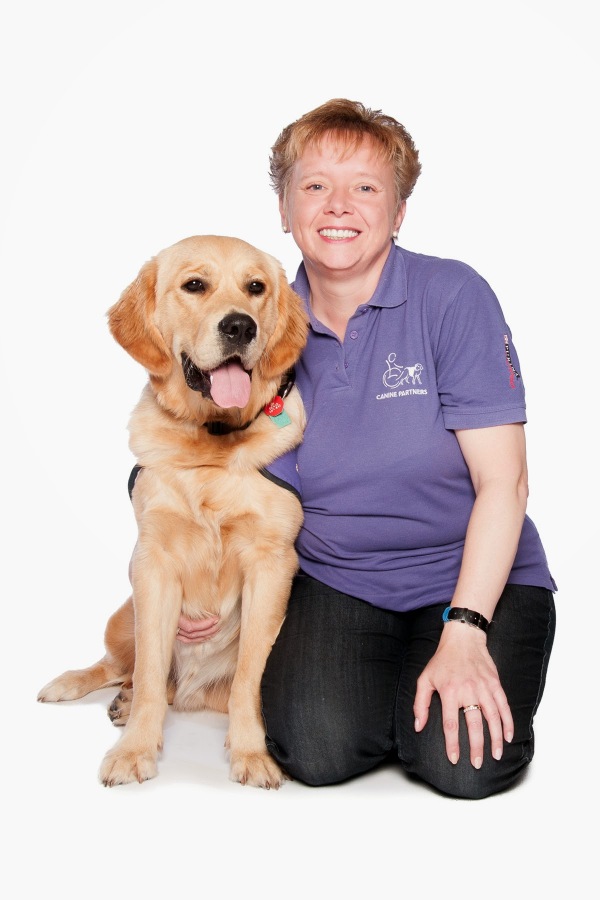 Jacqui is a volunteer for the charity Canine Partners, an organisation that trains dogs to help people with physical disabilities lead a more independent life.  As a puppy parent, she takes a young puppy from the age of eight weeks and has it in her home for 12-14 months before handing it back to the Charity for advanced training.  During that time she will take it to weekly puppy classes, socialise it, teach it basic manners and obedience and do continued training with it.

She has been volunteering for the Charity since 2013 and struggles with mental illness.  She credits becoming a puppy parent with, in her words, saving her life, and speaks passionately about this.

This is her story in her words:

“Canine Partners, quite simply, saved my life.  You may ask how this is possible as I am not physically disabled and do not need an assistance dog.  But I have suffered from severe clinical depression for over 20 years and from 1996 struggled with a dependency to painkillers which caused many secondary health problems.

I worked, raised my son and was married but was barely clinging to a life where I no longer recognised the person I had become. Gradually it all came undone, my marriage fell apart and in 2007 I became so ill with depression, panic attacks and anxiety my doctor signed me off work.

Despite my best efforts over the next 3 years I struggled to get well and eventually in 2010 I lost my job of 23 years. I sank to an all time low. I existed only for my son and his needs but he eventually went to live with his father, not that I blamed him. During this black period I sought help for the painkiller dependency and in May of 2011 I finally broke free of this hideous cage.

I am proud to say now that I am still free of this addiction, but back then I was not. You would have thought that this would be the very boost I needed to set me on the road to a brighter future but it strangely had the opposite effect.  I was assured that this was completely normal. Instead of viewing the world through a foggy haze of painkillers I was instead seeing it clearly, with all its harsh realities hitting me squarely in the face! It did not make for pleasant viewing and I did not like what I saw.  I withdrew from the world and became a recluse, scared to face a world I no longer wanted to be a part of. I was convinced the world no longer needed me in it so, I kept my curtains closed and remained locked away for as long as I could, as often as I could.  There are still some days I feel like this, even now.  I didn’t wash or get dressed unless I had to. I never went out alone unless I was going straight to my car. My only outings were to doctors, psychiatrists, dentists or my parent’s house. I went to Asda once a week always with my mum who went round with me. It was a lonely and limited existence, miserable and endless at the time. I did not even go in to my garden.

My television became my only escape, my company, my friend. I taped countless animal programmes mostly about dogs. I watched them over and over and over.  If my parents could get me to talk at all it was always about these programmes and my mum said it was the only time they saw a spark of the “old me”.  The people who knew me before and who know me now will find this hard to believe but I rarely spoke then, maybe some people would prefer me that way!

Over the course of 2011 and 2012 the panic attacks and agoraphobia developed and I withdrew further. This is hard to believe but you reach a point where you can’t turn back and you don’t know what to say any more. Twice during 2012 I tried to end my life by swallowing a lot of tablets and hoping I wouldn’t wake up. At the time it seemed the easiest way for everyone concerned. I am so very grateful now I did not succeed. I can only say someone must be looking out for me because just after my second attempt, that’s when my miracle happened.  My mum handed me the Paisley Express in January 2013 with an article about Canine Partners. They were looking for volunteers in Paisley. For the first time in years I was excited. But I couldn’t do that. I wasn’t good enough. They wouldn’t want someone like me. I didn’t even have the courage to phone the number in the article I had to e-mail. I didn’t even know what to say.

A few days passed. The phone rang. She phoned back!! She asked me to come to a class!! I stuttered my way through the call, explained about my nerves, asked could I bring my dad. Bryony was her name. She could not have been more welcoming. Bring whoever you want, come when you can, we would love to have you. I rang off. I was beaming. Then I was crying, sobbing. Could I do this? It had been so long. But I would get to be amongst the dogs. The pull of that was extraordinary but so was my fear. I still feel it now. As the day of the class approached I can still remember how petrified I was. Would people talk to me? Would I be able to speak? What would I say? Would I cry? I would make a show of myself. No-one would like me. Why would they? The list goes on. There were lots of tears, so many doubts, some days there still is.

When the day arrived it took everything I had to get up, get washed, dressed and get out of my house while still breathing. I cried the whole time. I drove to my parents, still weeping, stopped outside and took 5 minutes to try and control myself. My dad came out and said “ready”. I said “ok, let’s go”.  When we got there getting in the door of the church I put on my best fake face and smiled. I had made it in, and there they were. Lots and lots of dogs. I was in love. Right there.  Could not tell one from the other at that point but I did not care. I met Lester that day too. The dog who would change my life but I didn’t know it yet.

I spoke to a few people that day too. With my dad by my side I wasn’t too scared and the group seemed a nice bunch. Bryony was so great. She introduced everyone then right out asked if I would be back. I said yes. I have never missed a class since that day whether I had a dog or not.

After a couple of months I applied to be a puppy/foster parent and after fostering a couple of puppies I was asked to take Lester as his puppy parent had to go home due to a serious family illness. He was a 10 month old golden retriever and I must admit to being terrified at the thought of taking on something so big and bouncy as my first charge.  I ended up having him for 8 months until he left for advanced training.  Lester taught me to trust again. He made me laugh. He got me back out into a world I barely knew and helped me relearn how to communicate. My confidence began to come back a little as every day we walked along side by side solving the problems of the universe.

Dogs are great listeners. He was my confidante, my partner and my best friend in every sense and I will never forget what he did for me. He has now passed his advanced training and is at home with his new partner and I hope he is doing the same for her as he did for me. 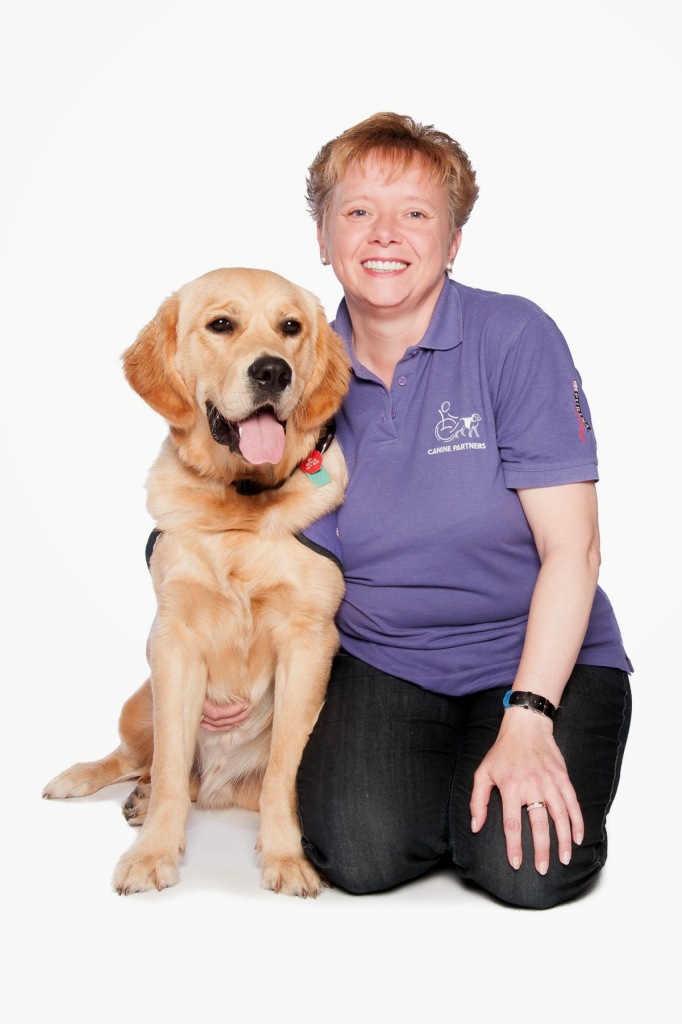 I have a new pup now – Bentley who is my new shining star. I continue to learn from him every day. I have been diagnosed withchronic migraines recently but Bentley seems to know if mum is having a bad day. He’s a very intuitive pup. Having him and the support of Canine Partners means I have a focus now. I cannot reach the low point I reached before. Canine Partners is my “Purple Army”. They are my second family. They saved my life and they change so many others.”