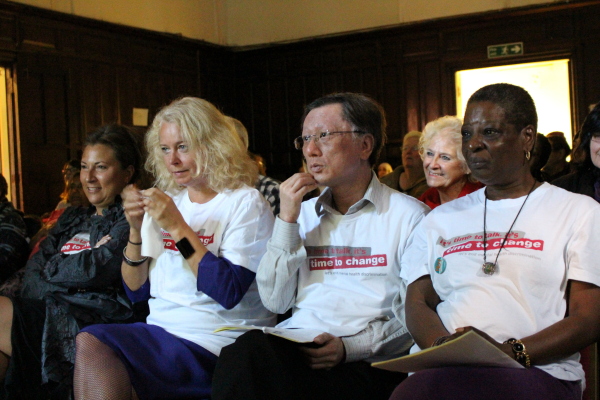 Four short films highlighting mental health stigma and discrimination have been written, directed, partly filmed, and starred in by volunteers who all have suffered from mental health illnesses. The Moving Pictures project was led by Toynbee Hall’s Wellness Centre for Older People, and was funded by Time to Change.

The four short films, shown for the first time at a recent Toynbee Hall event, were created to help prompt discussion about mental health issues.

Louise is applying for a school secretary job. The interview is going really well, until she tells them that she suffers from a mental health illness. Watch the video to see how the recruiters react, and if she still has a chance of being offered the job.

We see a woman trapped in a hole. Watch the video to see what happens to her.

In the longest of the four films, we see five people experiencing different issues when telling others about their mental illness.

The four short films on mental illness will now be taken out into the community and used as a resource to stimulate discussion around mental health discrimination. If you would be interested in hosting a screening (free of charge) please contact Kate Lovell at Toynbee Hall who can give you more information.