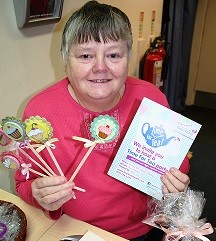 A cancer patient from Hillsborough has been ‘doing her bit’ for the local cancer hospital where both she and her husband were treated.

The couple both received treatment at Weston Park Hospital in Sheffield. As part of her treatment, Janet underwent a mastectomy, had her lymph nodes removed and received six sessions of chemotherapy.

Although Janet responded well to the treatment, sadly her husband Robin was less fortunate and lost his battle with cancer in July 2011.

Wanting to give something back for the exceptional level of care they both received at the hospital, Janet started fundraising for Weston Park Hospital Cancer Charity, in particular supporting its ‘Do Your Bit’ campaign.

The Do Your Bit campaign, which is being fronted by Sheffield-born Hollywood legend Sean Bean, is raising funds for the development of a state-of-the-art Cancer Research and Treatment Suite at Weston Park Hospital, which will give more patients access to the very latest cancer treatments.

“Although I am still receiving treatment I wanted to somehow repay the hospital for the impeccable care we received, through what has undoubtedly been the most difficult time of my life.”

“When Robin passed away, I was extremely unwell and unable to comfort and care for him due to the intensity of my own treatment. Despite these difficulties, the hospital staff treated me like family, making it possible for me to see him in his final moments, and for this I will be forever grateful.”

In March 2011, Janet was offered the opportunity to take part in a clinical trial called the D-CARE Study, which involved her undergoing six sessions of chemotherapy followed by check-ups at the hospital every three months.

Not one to give up, Janet started raising money for Weston Park Hospital Cancer Charity through several fundraising initiatives, including making and selling seasonal novelties, holding a regular stall at Asda and collecting unwanted clothes, with all proceeds going directly to the hospital’s dedicated charity.

In just one year, Janet has raised a staggering £5,000 for the charity, which will go towards the new Cancer Research and Treatment Suite.

“More than anything, raising money for the charity has become a hobby. It’s not only a chance for me to say a huge thank you, but also an opportunity for me to increase options for those who are facing a similar diagnosis to me.

“If I am able to help fund research into further clinical trials, which will ultimately increase someone’s chance of survival, then my contribution is not only vital, but an indication to others that we must all ‘Do Our Bit’ for cancer patients in this region.”

Weston Park Hospital Cancer Charity has a long and proud history of supporting cancer research and the clinical trials that are undertaken at the hospital. The charity is currently two thirds of the way towards its £1.3million target for the new Cancer Research and Treatment Suite.