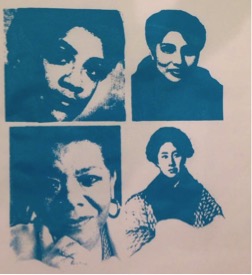 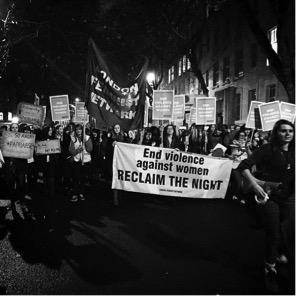 On Saturday 22nd November the 10th annual Reclaim the Night march was held in London.  My friends and I marched through the streets of central London with a simple message – whatever we wear, whatever the time and wherever we are women deserve to be safe. The atmosphere was electrifying as women of all ages, sexualities and backgrounds came together. Tired of feeling unsafe in our own city, tired of hearing our friends talk about abuse at the hands of men, tired of Time magazine calling for the end of the word feminism, we chanted, whistled and sang our way through London at night.

The sense of empowerment was amazing: we were the physical representation of the cause, women walking proudly through dark streets that can often feel so threatening alone. The support of people on the street showed this call does not just come from the ‘militant feminists’ railed against by the internet. Apart from one man who did not seem to see the irony of aggressively trying to grab a placard which read “end violence against women,” people of all genders were cheering, smiling and shouting encouragement as we went by.

This was the first year that I had marched, having been cautious about the exclusion of trans women in previous years. Trans women face abuse and discrimination perhaps more frequently than the rest of us and deserve our support. This is why it was dismaying to see leaflets being passed out suggesting that trans women still were not welcome. The way the organisers dealt with this was amazing, climbing on stage at the rally to utterly denounce such leaflets to cheers and applause from the audience.

When I returned home my friend asked me whether I thought these events really made any difference, he was not being belittling, just interested. Apart from the sense of community and empowerment that Reclaim the Night fosters, the relevance was really brought home to me at the rally after the march. There I learnt that on average two women a week are killed by a current or former male partner in the UK and one in every five women have experienced some sort of sexual violence since the age of 16. With the current political climate and government cuts threatening rape and domestic violence crisis centres, now more than ever is the time we need to stand up and be heard.

The rally featured incredible spoken word performances and emotive speeches, but what really grabbed my attention was the 50:50 parliament campaign. Frances, who is one of the most humble yet passionate activists I have ever met, has launched a campaign to end the male dominance of parliament, which currently amounts to a 77% majority. I do not believe that men cannot advocate for women’s issues but I do believe that lived experience shapes your political view, and as such we need more women in parliament to help end domestic abuse and sexual violence. More than that, women deserve to be in prominent positions of power.

We all left the rally on a high, feeling like we had learned a lot and put our money where our mouths were in standing up to violence against women. As we wandered home, munching burgers, drinking milkshakes and laughing, a man stops and shouts “yerr stuff it all in” and the bubble burst as we remembered what we were up against but now realised that we were not alone.

If you want to learn more about the 50:50 parliament campaign then check out their Facebook page: www.facebook.com/5050Parliament

Sarah Campbell is a final year Language and Culture student at University College London. She has been working with NGOs for a number of years and is passionate about women’s rights, education, social justice and grassroots development. She currently works with Global Giving UK.