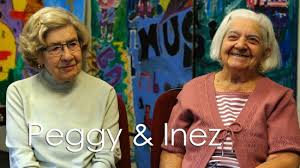 A Tale of Friendship at North London Cares

North London Cares is a volunteer network with over 720 active volunteers who give their time to help support their local elderly neighbours who may be in need of a little extra time, help, social connection or companionship. North London Cares seeks to build relationships in order to tackle the isolation and social divides that our elderly population are often subjected to.

The project has been in operation for over three years and has had many success stories since its opening in August 2011. One example can be shown through the story of how two women who met at a centre in North London have become firm friends.

Peggy and Inez met late in life; they are both 90 years of age and have been involved with North London Cares since 2011.  A North London Cares volunteer said: “They are always together – watching films together, collecting money for lunches, shopping, or just catching up with one another. And, as the film shows, they love a dance, too. They have, in turn, been each other’s support networks, playmates, oracles, and bedrock. They’ve got that special relationship that everybody has growing up and most people hope to sustain throughout life.”

The inspirational video below demonstrates what life is like for the two ladies. As the video shows, without an organisation such as North London Cares their lives would be much more lonelier. Their video tells much more than written words can do about the special bond that these two women have. These two ladies are just one example of the brilliant work that North London Cares does.

When you are young you probably don’t think about yourself in old age, it’s something that you would cope with when the time comes, which is all very well if you have family and friends to support you, but what if you didn’t? It could be a very lonely life if you didn’t have a friendship organisation like North London Cares; Peggy and Inez have certainly got a lot out of it.

As a result of the work North London Cares do, 81% of people who are part of the project say that they feel better connected to other people. This is an outstanding achievement for the project and I urge all those interested in volunteering to do so via their website www.northlondoncares.org.uk.