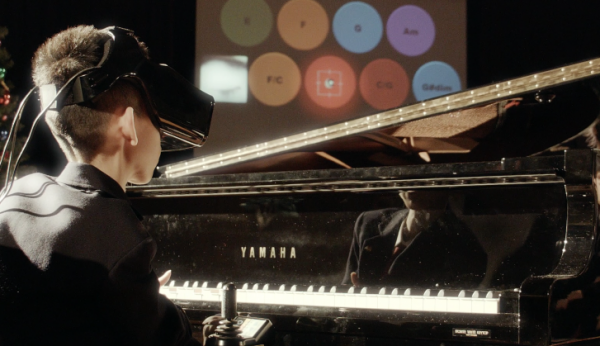 The boy in the video above is playing the piano without the use of hands or arms. How? By using FOVE, a virtual reality device that is set to revolutionise the world of virtual musicianship.

FOVE was borne from a collaborative project called “Eye Play the Piano” which began in April 2014 at the University of Tsukuba’s Special Needs Education School for the Physically Challenged. The resultant “Universal Piano” illustrates the versatility and potential for virtual reality.

The FOVE head mount device allows the user to play the piano without the use of hands or arms. It accomplishes this through eyesight tracking and head tracking, which enables the creation of a 360-degree virtual world perceived through the movements of the eye.

So how does it work?

2. By looking at the panel within, the interface triggers the preferred note.

3. The user blinks on the preferred panels within the interface to trigger the selected note, which is then conveyed to the connected piano via MIDI signal.

4．Furthermore, tilting down of the head plays the role of the piano pedal which lengthens the selected note.

On December 18th 2014, the Eye Play the Piano system was used during a Christmas concert held and conducted by students of the University of Tsukuba’s Special Needs Education School for the Physically Challenged. One of their students, Kota Numajiri, who had practised for four months, conducted by the Parent Teacher Association chorus played piano using this head mount device.

Advances in computer power, graphics and user interfaces, has meant that virtual reality is truly having a renaissance of sorts. Its potential applications beyond the realms of the gaming world are tantalising.

Makers have ambitious plans to donate a device to fifty specialised schools for the physically disabled in Japan.

For more information on this exciting work, please visit their website: http://fove-inc.com