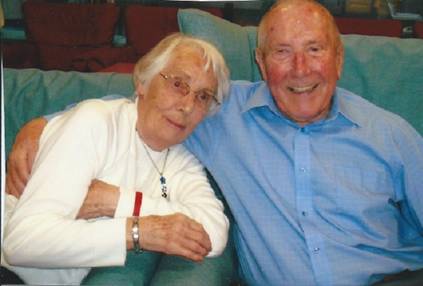 You Find Love When You Least Expect It

Valentine’s Day is not always the easiest day when you are single, but this story will hopefully put a smile on your face and help you see that the saying ‘you find love when you least expect it’ really is true.

89-year-old Dennis Hatch and 84-year-old Nancy Roberts, who live together in Broadway, Worcestershire, have found love again after meeting at one of Blind Veterans UK’s rehabilitation centres in Brighton.

Dennis lost his sight due to macular degeneration and has been supported by Blind Veterans UK, the charity for ex-Service men and women, for five years now. He was entitled to receive free help and support from the charity, as he volunteered for the Navy in 1943, working in the engine rooms. He spent three years in the Mediterranean, Malta, South of France and was demobbed in 1946.

Nancy, who is a Blind Veterans UK widow, came in to contact with the charity after her husband Ted, went blind over night. Ted served in the Second World War as part of the Royal Signals. She has been receiving help from the charity for ten years now, after becoming Ted’s fulltime carer. Even after Ted’s death Nancy was still entitled to receive support from the charity as Blind Veterans UK also look after the spouses and families of blind veterans.

Nancy said: “Blind Veterans UK have been such a big support to me and relieved me of a lot pressure over the years when I was caring for Ted. I have so much to thank them for and even more so now I have met Dennis!”

The couple met each other while visiting one of Blind Veterans UK’s rehabilitation centres in Brighton. Neither Dennis nor Nancy, were expecting to meet someone to start a new life with at this point in their lives. Their story really does show that you find love when you least expect it.

So, how did it all begin for Dennis and Nancy?

Dennis said: “It all started over breakfast, when I sat down I saw this lady with a lovely smile on her face sat opposite me. I was trying to pour myself a coffee but as I have a shake, she helped me to pour it. She then ended up buttering my toast for me as well! Meeting someone was the last thing on my mind, but we immediately clicked and get on so well.”

Dennis became involved with Blind Veterans UK just after his wife died. He has received a range of equipment and training from the charity, but it was having the opportunity to meet other people that really turned his life around, “Blind Veterans UK have been very good to me. They loaned me a scanner, some talking books and advised me on getting a stair lift but the best thing Blind Veterans UK has ever done for me was allowing me to meet Nancy.”

Nancy adds: “After Ted died, I had to rebuild my life again. I still enjoyed getting to Blind Veteran UK’s rehabilitation centre in Brighton; it was good to socialise with other people. Meeting someone was the last thing on my mind. I didn’t want anyone else, I had cared for Ted for so long, but when I met Dennis we just hit it off straight away. It’s like we are living our lives all over again.”

For 100 years, Blind Veterans UK has been providing vital free training, rehabilitation, equipment and emotional support to vision impaired veterans to help them go on to lead full, independent lives and in many cases, excel in areas such as work, education and sport.

Blind Veterans UK is currently reaching out to more veterans like Dennis and Nancy, as part of its No One Alone campaign.

If you know someone who served in the Armed Forces, or those who did National Service, and is now battling severe sight problems, Blind Veterans UK may be able to provide them and their family with a lifetime’s practical and emotional support for free.