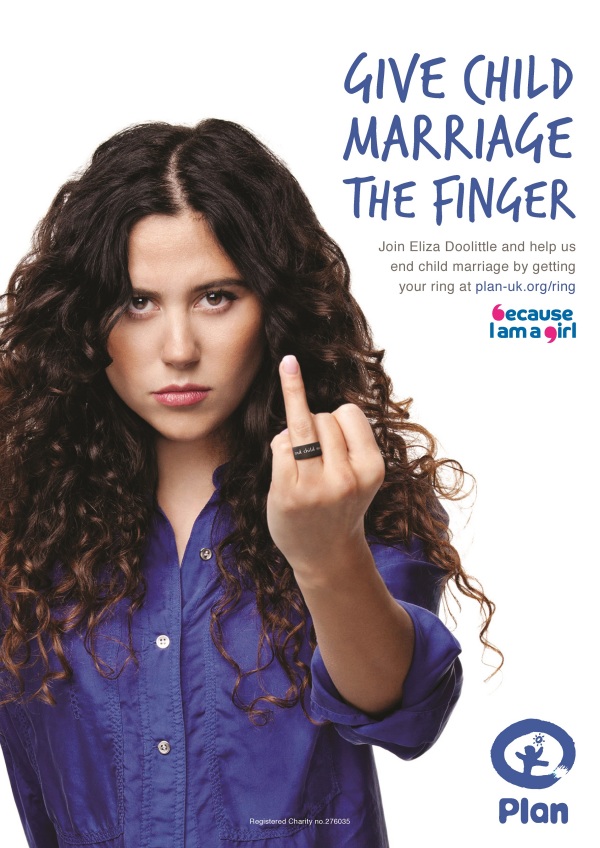 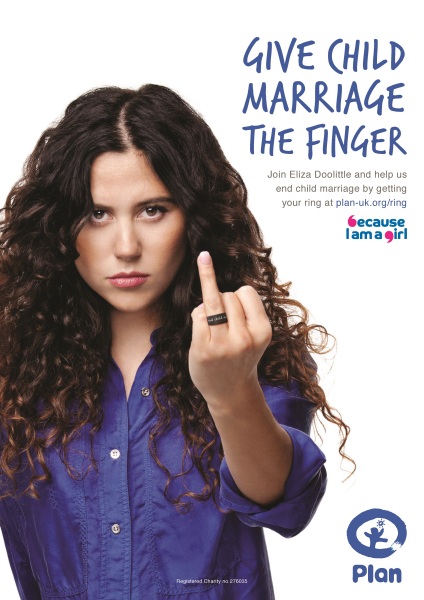 Eliza is the first to ‘give child marriage the finger’ wearing one of the charity’s new custom-made campaign rings.

Plan is working tirelessly to stop child marriage – currently affecting 15 million girls globally every year – through the world’s biggest girls’ rights campaign, Because I am a Girl.

RELATED: UK school girl writes poem about forced marriage after being inspired by the Plan International campaign Because I am a Girl

Child brides are forced to drop out of school, have children before they are ready and are often subjected to violence and abuse. It is every girl’s right to choose if they marry, and if they do – who and when they marry.

“There are so many children out there being forced into a position which imprisons them and they should be free to become whoever they want to be. It breaks my heart,” says Eliza, a long-term supporter of Plan UK.

“I hope this campaign will inform more people, and that child marriage can be completely stopped.”

Plan UK is offering the rings, with the words ‘end child marriage’ on them, to everyone making donations to the Because I am a Girl campaign.

Join Eliza in giving child marriage the finger by wearing the ring on your wedding finger. Donations to the Because I am a Girl campaign will contribute to Plan’s work in countries like Bangladesh to end child marriage.

“The more people know about the lifelong harm child marriage does, the less likely it will happen. Through collective action, will we be able to end child marriage and empower girls to fulfil their own potential.

“Our work has shown time and time again that the first step to successfully ending child marriage and other forms of violence against girls is education, and to break the silence on these issues.”

For more information about Plan’s work to end child marriage or to make an online donation, visit www.plan-uk.org/ring