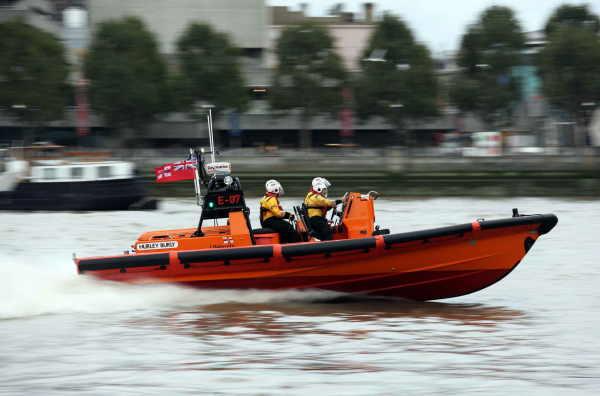 Two Spanish tourists and a bar worker who bravely tried to rescue them were saved from drowning in the River Thames by an RNLI London lifeboat crew on Tuesday 17th March.

Video footage (below) of the dramatic rescue was captured by Tower RNLI lifeboat crew who launched at 1.32am on 17th March to reports of people in the water near Temple Pier, on the north bank of the Thames.

As the charity’s lifeboat arrived, the crew could see three people, aged in their twenties, clinging for their lives to the river wall, out of reach of a crowd of horrified onlookers gathered on the Embankment above.Kevin Maynard, Tower RNLI lifeboat station manager, said: ‘We could hear shouting as we arrived and someone in the crowd was flashing a light into the water to guide us to the casualties.

‘There were three men in the river who were trying to cling onto a bit of wall but the tide was sweeping them along. As the boat arrived on scene, one of the men lost his grip on the wall and sank below the water.

‘In a panic, he then grabbed one of the other men and pulled him from the wall, with both men now struggling to stay afloat. We arrived just in time and got all three safely aboard the lifeboat.

‘One of the men was suffering from hypothermia and the others were freezing cold. All three had swallowed a lot of water – they were lucky lads and could all too easily have died. We’ve chalked this up as three lives saved.’

It is thought one of the Spanish tourists had been sitting on the river wall during a night out when he fell into the water. His friend then went into the river to rescue him, but neither could get back out. On finding themselves in a life or death situation due to the cold water and strong river currents, they started screaming for help in Spanish.

Meanwhile, a Spanish speaking worker at a nearby bar heard their cries for help and dashed over. He stripped to his waist, entered the river and managed to help keep the now exhausted tourists above water, but soon found his own life in danger.

Kevin added: ‘The bar worker helped these men by keeping them afloat but then found his own life in danger. His intentions were good, but our advice is never go into the River Thames to rescue someone. If you spot anyone in danger, call 999, ask for the Coastguard and an RNLI lifeboat will arrive within minutes.’