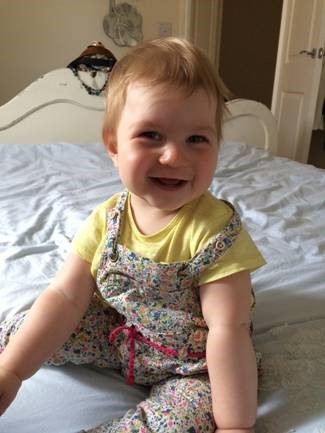 Jess and Dan Bushell’s baby girl was starved of oxygen for seven minutes at birth. She was urgently referred to the Rosie Hospital in Cambridge where they specialise in pioneering ‘brain cooling’. Lexi needed immediate treatment as there was a high chance she would have some form of brain damage. The hospital was 100 miles from their family home.

UK charity The Sick Children’s Trust provided Jess and Dan with free, high-quality ‘Home from Home’ accommodation, as well as emotional and practical support. This meant first-time parents Jess and Dan were both able to be with their daughter.

Jess and Dan are particularly grateful for House manager, Alan Booth’s hospitality and support through a challenging and agonizing time in their lives,

“Alan is one of life’s little gems. He was such a breath of fresh air. We were going through a tough time in our lives and every day he brought some normality into what was a tragic situation. He was so positive all of the time.

“We honestly do not know what we would have done without the help and support of The Sick Children’s Trust. We were there for two weeks and they supported us through the toughest time of our whole lives.”

Jess and Dan were told that Lexi was at risk of severe brain damage and that was if she survived at all. But 16 months on, she is recovering well, with no obvious long term effects.

Watch Lexi’s journey, including the special moment when she is held for the first time by her mum Jess, in the video below:

To say thank you to The Sick Children’s Trust, Jess and Dan organised a black tie charity ball to raise money for the small charity. 120 guests came and enjoyed a three course meal and live entertainment, and raised an incredible £7,300.

Jess said, “Lexi has no idea what trauma she went through at birth, nor will she have any memory of her time at Addenbrookes Hospital. We, however, will have those memories ingrained in us until our dying day.

We feel compelled to give something back to ‘The Sick Children’s Trust’ as a way of thanking them for being so amazing and getting us through such an awful time. Being a smaller unknown charity the money made from the ball will really benefit the work they do and what they are able to offer future families in need.”