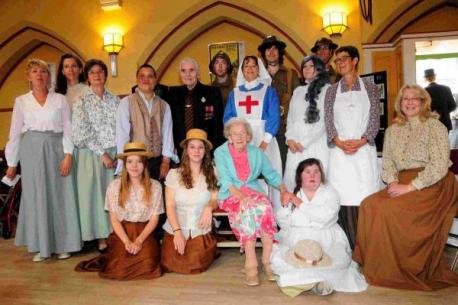 Supported by the brilliant work of Fixers, the charity which enables young people to campaign on topical issues they want to be heard in their communities, a new and unique campaign has documented how youth heritage projects no longer have to be exclusive to the most knowledgeable, or even have a great interest, in the subject.

Perhaps sceptical of this view myself around five years ago, my active involvement with two distinct projects, one that celebrated the history of youth clubs and then of an Anglo-Saxon and First World War soldier, have resulted in outcomes that few would probably anticipate at the beginning.

Being located in Dorset, which itself is not short of a rich and diverse history, the devising of Geocache trails (which is a treasure hunt with GPS), mobile apps, radio plays and a close relationship with the local media could have not been achieved without the talents of young people who had not necessarily shown an interest in history, but were able to contribute in other and far more creative ways.

From the film produced for ITV local news, which had the fortune of being in shown in three of those bulletins, Fixers have been able to convey the closeness of our group from diverse age and socioeconomic backgrounds. We also openly welcomed the volunteers who had additional needs and were able to provide the support which could makes sure they felt able to participate. The resource itself, designed in a comic format, is testament to the broader appeal that history can have outside of school and what I hope will contain much of the examples that have made the projects the successes they were.

Besides this, much is owed to the work of Dorset Youth Association who put their faith behind these projects to generate a shift in attitudes of people of all age groups in which history could be conveyed.

It is my hope now the cynical curators (if any) of museums and young people feeling disconnected from their community can see the benefits of how heritage really does shape your future too. The campaign is not one to make young people conform to the ordinary teachings of their history, but remould it and ensure its relevance for decades to come.

For more information about the projects, please see:

Walking in their Shoes: http://www.walkingintheirshoes.co.uk/