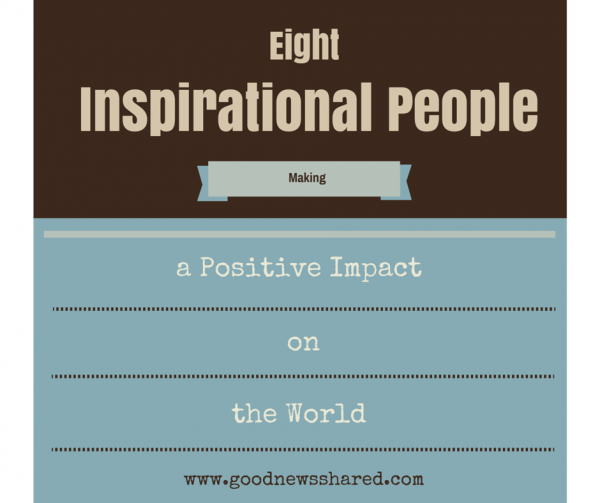 8 Inspirational People Making a Positive Impact on the World

The Good News Shared website is 1 today! To celebrate we are looking back at some of the stories from our first year.

Below are some highlights from Good News Shared’s 1st year: 8 inspirational people making a positive impact on the world whom we’d love to meet.

Ramesh contracted polio when he was 6 months old. When aged one and a half years old Ramesh was handed over to an orphanage – within a year he was adopted by a family based in Yukon, Canada.

I randomly saw a tweet a couple of years ago about the work Rotary are doing to eradicate polio. After reading that tweet and a few articles I knew this was something I wanted to help and support. I subsequently joined Rotaract, a membership organisation for young people sponsored by Rotary and have been involved in small fundraising events to raise money and awareness about the campaign to end polio.

Click here to check out our story about what happened when Ramesh met the Dalai Lama.

Michael made this decision after experiencing the worst three years of his life. Read his account of the year he did something new or carried out a random act of kindness each day here. I love the idea of doing something new or for others every day – maybe something I should try..

I love this story! I worked for a charity supporting older people across the UK for almost 4 years, but I don’t think I have ever heard such a quirky story of someone doing something so selfless and kind, and potentially painful, for an older person that they don’t know.

Click here to read the story and to see a photo of Cesar in action.

Alexi makes robots using tin cans. The tin cans are empty because he has used the contents to cook for local homeless people. Alexi sells the robots to buy more tin cans, so he can continue feeding homeless people.

The creativity, passion and compassion Alexi has is incredibly inspiring. Read his story and check out some photos of robots he has made by clicking here.

Bryan has said, “My dream is to become the first person with cystic fibrosis to compete in the Olympics as the goalie for the USA hockey team.” It’s hard not to be inspired by Bryan’s love for life. Check out the video for the OneRepublic song featuring Bryan here.

I spoke with Megan (pictured above, second from the left) via Skype for one of my very first podcast interviews. Her enthusiasm and passion for life was incredibly inspiring, and I’m sure it would be even more so in person.

Click here to read or listen to Megan’s interview, in which she talks about the moment she found out she had cancer; the support her friends gave her; the impact Dimbleby Cancer Care had on her; why she started volunteering for the organisation; and her favourite memory from her time volunteering (it involves Samantha Cameron!).

Despite facing many years of exclusion Sok never lost his dream to become a teacher. His attitude and message to people that they should see ability rather than disability is brilliant. Read the interview he did for Good News Shared back in June here.

Professor Robinson has been awarded the European Laureate award, making her the 5th British scientist to have won the European award in the 17 years of the programme’s existence. I really admire the way Professor Robinson has achieved success on her own terms. She left school at 16, studied part-time whilst working and then took an eight year career break to raise her children before returning to academia.

Find out more about the work Professor Robinson does and why she recommends a career in science by clicking here.