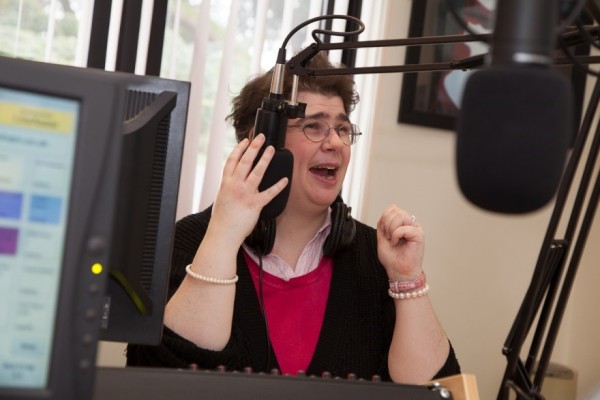 Radio Enham Gives People With a Disability a Voice

Baroness Tanni Grey-Thompson DBE – respected parliamentarian, disability rights campaigner and one of Britain’s greatest Paralympians – is voicing her support for Radio Enham, ahead of the official opening of the station’s brand new studios on Wednesday 22nd April.

Radio Enham is an online radio station managed by a team of over 40 presenters, researchers and production staff with complex needs, who have been able to build their confidence and learn professional broadcasting skills, thanks to support and funding from disability charity Enham Trust. Radio Enham’s programmes cover a wide range of topics relevant to disabled people, from getting a blue badge and testing different wheelchairs to finding accessible holidays.

The station has a growing number of listeners across the UK and as far-flung as Norway, Bahrain and Australia.  Some presenters who barely spoke before joining the team are now regularly on air.  “It’s our voice to the wider world,” says one.

Baroness Tanni Grey-Thompson DBE is a big fan of radio, saying, “What I love about radio is that it’s my constant companion. “I travel so much around the country on the train or in my car, on my own – but I’m never on my own because of the radio. The power of radio means time and space to think about what’s going on in the world.  The power of Radio Enham is in giving people with a disability a voice.”

Having broadcast from a cramped disused office since its launch in 2011, the Radio Enham team has now moved to new state-of-the-art studios.  These will be officially opened at the charity’s headquarters in Andover, Hampshire on Wednesday 22nd April from 11am to 12.30pm, by guest of honour David Jensen, the former Radio 1 DJ and Top of The Pops presenter.

Looking ahead to the opening event, David said: “I am delighted to be opening these new studios for Radio Enham. This radio station has a really positive impact on all those involved, helping to build confidence and skills, and encouraging disabled people to challenge themselves.

“Radio Enham shows the power that radio has – not just for the listener in entertaining and informing – but also for the team working on the station, which helps to empower them and give them a voice to speak out.”

As one of its founding members, Lizzie has witnessed Radio Enham’s evolution over the years. Preferring the term ‘journalist’ to ‘disc jockey’, Lizzie says engaging in topical and political discussion is more important to her than playing music; she presents ‘Loose Wheels’ – Radio Enham’s daily political talk show – and ‘Drive Time’.  For Lizzie, working at Radio Enham is less a job, more a passion.

“I was made for radio,” she says. “I have a lot of fun on air; I like putting a little comedy into the shows.  I’ve made friends and met my future husband because of Radio Enham. It saves me from staying in all day and has built up my confidence.”