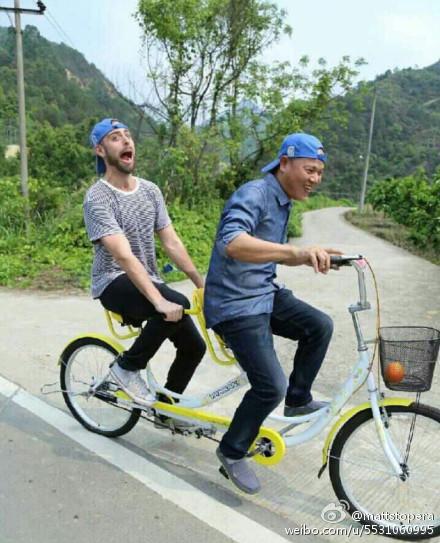 By now you’ve most likely seen this captivating story trending on Facebook, Tumblr or its original source: BuzzFeed, and I think we can all agree that stories like this fill you up with all the best kinds of feelings. And if you haven’t had a chance to read it yet, I’ll give you the shortened version, or you can click here to read the full story.

So it all began in New York City when Matt, the star of the story, got his phone stolen in early 2014. As this thing happens all the time, there wasn’t much he could do until about a year later photographs began showing up on his photo stream, photographs he hadn’t taken. Among the many photographs were several selfies of a Chinese man and an orange tree, random, I know, but it’s a key part of the story.

Pics of some man in China taking selfies with an orange tree started showing up on my phone: http://t.co/GxvgVmOlRa pic.twitter.com/n42vlkEkih

Naturally, that’s a little freaky finding all these photographs that aren’t yours, and so naturally, Matt wrote an article about it for his job, BuzzFeed. Very quickly the article got translated into Chinese and began receiving unbelievable amounts of publicity on Weibo, the Chinese equivalent of Twitter. All of Matt’s fans in China wanted to help him find the mysterious orange tree man, who they had officially branded as “Brother Orange”. Matt joined Weibo and by the end of the week he has more than 100,000 followers. Several of the followers asked Matt to make videos helping to teach English, which he did, only extending his following of fans.

Anyways, back to Brother Orange, so, soon enough, through the power of media, Brother Orange was found, and him and Matt got in contact with one another and began to talk. This went on for several weeks, ending with Matt getting an invitation to China to meet the mysterious man. Matt agreed. And so, Matt and a small team from BuzzFeed, including two translators and a cameraman, set off to Meizhou, a city in southern China.

After about 20 hours of travel, Matt was bombarded by a mob of cameras and fans and most importantly, Brother Orange, who greeted him at the airport. Upon meeting Brother Orange, he gives Matt back his phone and explained that his cousin had bought it for him as a gift from a second-hand cell phone market. As Brother Orange didn’t speak any English, translators had to translate Matt and Bro’s conversations to one another. However, Matt explains that this was not really a problem at all and they found other ways of communicating, such as tapping their heart three times to convey that they are happy- a gesture that would occur a lot over their journey.

Over the course of nine days, Matt and Brother Orange embarked upon their little adventure around parts of China, stopping only for short periods of time, and naturally, getting mobbed by countless cameras, reporters and fans, desperately trying to get a selfie with the beloved duo. As well as touring around parts of China to greet the fans, Brother Orange and Matt were invited to partake several activities, some of which were very amusing, these included: planting an orange tree to symbolize the Chinese-American friendship, attending many press conferences, chiselling into a giant stone goat at a carving place, taking a mud bath together. Matt also was asked to be the travel ambassador of the small and beautiful village Citaslow, which he graciously accepted. Also, bear in mind all of this was done whilst being swarmed with reporters and camera crews.

My fav picture from the trip so far. Love us. pic.twitter.com/fmNvjenQqX — Matt Stopera (@mattstopera) March 22, 2015

Throughout this unbelievable journey as minor Chinese celebrities, Brother Orange and Matt grew very close. Matt describes Brother Orange as having this wonderfully infectious energy that surrounds him, making everyone love him and want to spend time with him. This captivating story just goes to show the amazing ability to overcome language and cultural barriers depicting that this is a time in which these obstacles can easily be surpassed with a little patience and a lot of compassion. Matt concludes by stating that he is now considered a part of Brother Orange’s family and they -after everything- have become like brothers and will most certainly stay friends evermore.

The story of Brother Orange and Matt meeting gained over 70 million views on Weibo and unsurprisingly BuzzFeed is turning this remarkable story into a documentary, you can watch the trailer below:

Their story doesn’t end there though. Following Matt’s visit to China, Brother Orange has visited Matt in the USA, where they have enjoyed a Britney Spears concert and have been interviewed on the Ellen Degeneres show.