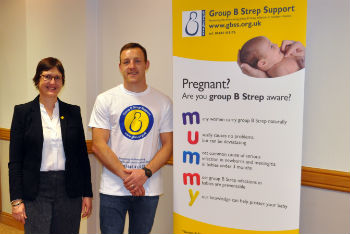 Rugby superstar and one of the world’s leading no. 9s, James Roby nearly lost his son Ollie to the meningitis caused by group B Strep.  James is now lending his support as a Patron of charity Group B Strep Support and helping to raise much needed awareness of this devastating infection.

James says, “I was neither informed, nor had heard about group B Strep before Ollie became so ill.  Luckily he has made a full recovery but not all babies do.  Group B Strep infection is usually preventable.  I want to be make sure that other families do not have to go through the same trauma and will be raising awareness so they are aware and informed.”

This major scare for the family left James and his wife Natasha determined to do all they could to highlight group B Strep infection in newborn babies and help a charity that was “close to his heart.”

Group B Strep is the UK’s most common cause of life-threatening infection in newborn babies and of meningitis in babies up to the age of 3 months, yet almost half of pregnant women have not heard about it.  At least 500 babies a year in the UK are infected with group B Strep; of these, one in 10 sick babies die, one in 20 survivors suffer long-term problems and five in 10 survivors of group B Strep meningitis suffer long-term mental and physical problems including cerebral palsy.

Group B Strep is a normal bacterium carried by 20-30% of women and, although rarely dangerous to women, it can be passed onto baby around labour and birth with potentially devastating consequences for the baby.

Identifying pregnant women carrying group B Strep late in pregnancy and giving them intravenous antibiotics (usually penicillin) during labour can reduce group B Strep infection in newborn babies by up to 90%.

Jane Plumb, chief executive of Group B Strep Support says, “The charity is thrilled to welcome James as a new Patron.  He is not only a highly regarded rugby player but also a lovely, caring father and I have enjoyed getting to know him over the last few years.

He has raised much-needed funds for the charity, and he has brought the issue of group B Strep to a whole new audience. We know that he will continue to do all that he can to ensure families don’t suffer the trauma his family suffered. He is a true star.”

The number of group B Strep infections in newborn babies has risen by 21% in England, Wales and Northern Ireland since risk-based group B Strep prevention guidelines were introduced in 2003.

Find out more about Group B Stret Support by visiting their website.