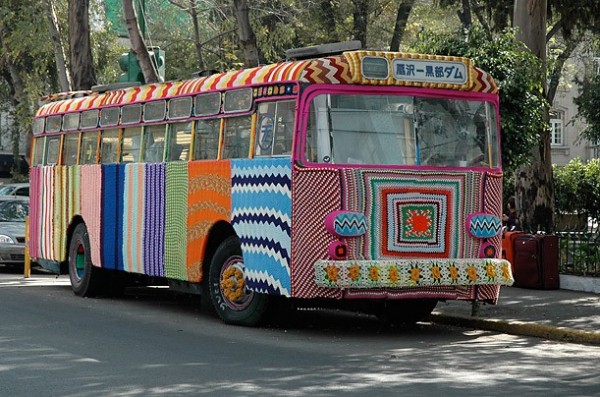 A bus in Mexico gets an amazing upgrade with new woollen covers Photo: magdasayeg.com
Community Spirit

The Woolly World of Yarn Storming

By Brodie Turner on May 12, 2015 1 Comment
A bus in Mexico gets an amazing upgrade with new woollen covers Photo: magdasayeg.com

When living in a city or town it can be easy to let our environment dissolve into monotonous grey slabs of concrete. But in recent years a new kind of street art has evolved that aims to punctuate such monolithic cityscapes with a heart-warming surprise.

The term ‘yarn storming’ or ‘guerrilla knitting’ may not be familiar to you, but you might have already witnessed the phenomenon even if you aren’t aware of its name. Guerrilla knitting involves decorating public places and spaces with knitted or crocheted patterns of wool, resulting in a completely unique type of graffiti or street art. After lovingly crafting their pieces, artists adorn their chosen object with a rainbow mishmash of wool to create a truly striking explosion of colour in unexpected places. Many guerrilla knitters leave their handmade patterns dotted about in public to simply decorate dull and dreary places in the hope of bringing a smile to the face of passers-by. Others choose to use their skills to make political statements by softening and covering images or items of war and conflict. This means that all kinds of objects and places have seen the touch of guerrilla knitters – from abandoned vehicles to statues, trains, trees, signs and even tanks! Not only does yarn storming add vibrancy to even the most ordinary of city corners, the colourful woolly patterns are easily removed unlike other, more traditional forms of street art and so don’t damage the things which they adorn.

A bus in Mexico gets an amazing upgrade with new woollen covers
Photo: magdasayeg.com

The craze originated in America, but knitters from across the globe in places such as Spain, Germany, Canada, Australia Russia, Mexico and the United Kingdom. Within the UK, ‘Knit the City’ were perhaps the most prominent group to bring the concept of guerrilla knitting and have undergone many projects -some charitable, others simply aesthetic – in their quest to decorate London. The collective formed out of the amazing response to founder Lauren O’Farrell’s decoration of the Trafalgar Square lions with a 550ft knitted scarf in order to raise money for Cancer Research UK in 2009. Since then, Knit the City have continued to disrupt the concrete monolith that can be city living and the group even induced the early arrival of Spring in Brixton by covering bollards, walls and fences with smiling flowers, insects and , of course, a large sun. Although Knit the City is less active these days, yarn storming in the UK has spread and continued. In Leicester, trees were decorated with woollen ornaments to reduce fear of crime in a particular area by brightening up the environment in an unintimidating way. In Cambridge, university students decorated a bike that became a piece of college art and in Orkney local yarn stormers have decorated trees with cosy knits.

The knitted pieces that yarn stormers share encourage us to take note of and engage with the world around us instead of forever rushing by, and act as reminders that perhaps not everything in life has to be serious.