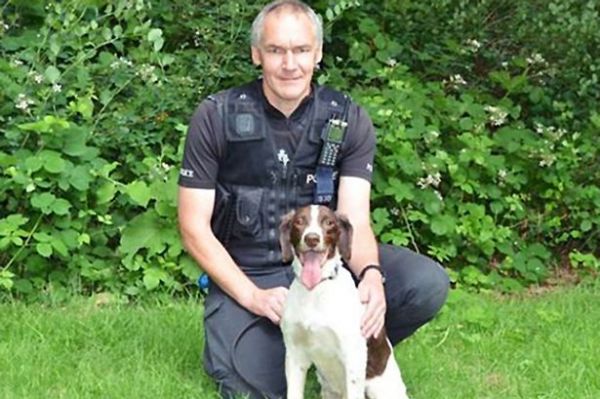 Jake, a springer spaniel who served with Warwickshire Police, has been awarded a medal by the PDSA. The medal (The Order of Merit) is awarded to any animal who deserves recognition for outstanding contribution. This medal is the equivalent of the OBE presented to humans. This medal has only been awarded once before – to the police dogs and horses that served in the 2011 London riots.

Jake began his police career with Warwickshire Police when he was 18 months old. He underwent intensive training for his role of identifying drugs, firearms, ammunition and banknotes. Upon his graduation he was partnered with PC Andy Crouch, and they stayed together for the whole of Jake’s career. The pair covered many events, including royal visits, Olympic Games, horse racing and music festivals.

PC Crouch said Jake performed thousands of searches, intercepted many illegal activities and was responsible for helping to put many criminals behind bars. Jake was responsible for sniffing out more than £5 million in cash, drugs and firearms. In his ten year career Jake made 500 finds of firearms, banknotes worth more than £650,000 and £4.5 million in illegal drugs.

When Jake retired in August 2014 he still stayed at the home of Andy Crouch along with their family’s four other dogs where he loved to play search and find with Andy. Unfortunately Andy and his family were left devastated when Jake died suddenly in March 2015. He said,

“Jake would have carried on working, given half the chance, but it was important for him to take some time out. He was a joy to work with and I doubt that many handlers will find a dog so willing to work and to please.

“My family and I were devastated when Jake passed away, especially so close to this award being presented. But I am very proud to be here with his old canine colleague and friend, Gwen, to accept the award on his behalf. Jake’s award will take pride of place in our home, along with his Police Commendation and his Force tag, which he wore every day for ten years.”