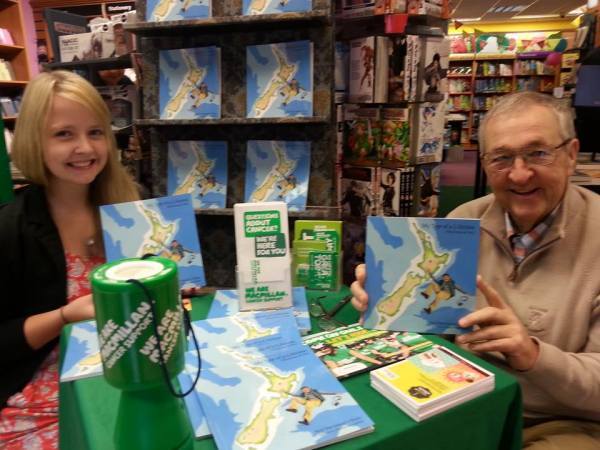 My Trip of a Lifetime (Myeloma & Me), Neil Stevenson’s Story written by Katherine Latimer
Inspirational People

By Susannah Green on May 18, 2015 0 Comments
My Trip of a Lifetime (Myeloma & Me), Neil Stevenson’s Story written by Katherine Latimer

In 2012, Neil Stevenson was diagnosed with myeloma, an incurable bone marrow cancer.  Since then, he has raised over £100,000 for Macmillan Cancer Support in addition to writing an honest and moving book covering his life story, the proceeds of which also go to the charity.

In his younger years, Neil was involved in the textiles industry, initially attending the University of Bradford to study a course on dyeing materials.  He then went on to run the family business, the Edinburgh Woollen Mill, with his brother David.  As Neil describes in his book, “the first chunk of my life was relatively successful and extremely satisfying”.  He was also a keen and able sportsman, enjoying ruby and shooting among other sports. Neil has always been very charitable; in 2001, he raised £75,000 for a sponsored slim and subsequently he chaired the committee responsible for building the Oncology Unit at Dumfries Royal Infirmary.

However in 2012, Neil was diagnosed with Myeloma, leading him to face a number of physical, mental and emotional challenges.  Through his life journey in the past two and a half years, Neil has had to come to terms with his life expectancy being shortened, various treatments failing to work for him and encountering further medical problems such as pneumonia.

My Trip of a Lifetime (Myeloma & Me), Neil Stevenson’s Story written by Katherine Latimer

His book takes the reader on a roller-coaster of emotions, from hearing Neil’s humorous anecdotes to the painful reality of his illness and treatment plans.  It is also educational, addressing the feared subject of cancer in an accessible way and providing a real insight into the life of a cancer patient.  On reflection, Neil concludes that his fight with cancer has proved to himself his own strength, his ability to cope and his determination.  He has been able to fight his illness to date by living his life, battling those challenges within his control and striving to meet his goals.

These goals have included raising further funds for Macmillan Cancer Support.  Not only are the proceeds from his book sales given to charity, he also persuaded 50 friends to each donate £1,000 to the charity, and matched their contributions.

Please then donate £5 to Macmillan by texting NEIL to 70550, or click here to go to his fundraising page.