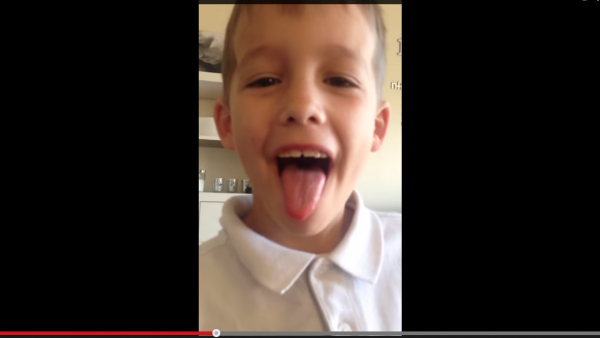 Jesse O’Brien, 6, from Kesgrave near Ipswich has Cystic Fibrosis and he hates taking his medication. He has to take around 40 pills a day just to keep well. So his mother, Heidi, ‘bribed’ him, saying that if he took his tablets, she would video it and put it on Facebook to see how many likes it would get.

She expected a few hundred likes and maybe some positive comments. But the video took off and it now has over 1 Million hits and tens of thousands of likes and shares.

My little brave man really struggling to take his meds so I told him I’ll film it and put it on Facebook please like and share for my little soldier it would really make his day ( it takes 2 sec) Jesse has cystic fibrosis xxUpdate*Let’s #beatCF so please text JESSE to 70300 to donate £3 to Cystic Fibrosis Trust and help children like my boy! Thank you so much for your kind words and support, it’s helped Jesse so much!

Jesse has released a further video to celebrate 1 Million hits and to ask for people to donate to the Cystic Fibrosis Trust to help them in the fight to beat the life-shortening genetic condition, which slowly destroys the lungs and digestive

For more information about the Cystic Fibrosis Trust please visit their website.