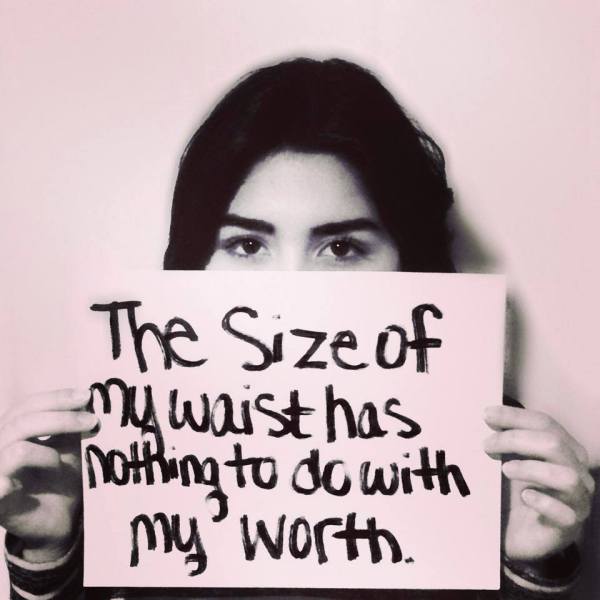 The Difficulty to Achieve Positive Body Image in Modern Society

Women’s ideal body image has altered considerably over history whether it be the athletic and lean aspirational body type of the 1990s or the womanly, hourglass figure that women aspired to in the 1950s. Never has there been more disparity between the women that we view in the media and the women we see in the society surrounding us. Celebrities and models have bodies that the average woman can only aspire to have. This can have a detrimental effect on the body image of women who believe that if their bodies are different to these women, who we are told are beautiful, then they are not attractive which can lead to obesity or eating disorders.

Young women are at a particular vulnerability to possessing negative body images as they have grown up in a society that is saturated with images of tall, impossibly slim women. This negative body image is influenced by a media that uses air brushing which leads to producing images of women who are perfect and without blemish. This image is of women who cannot exist in reality.  Aside from this these famous women have the wealth and celebrity to give them the use of personal trainers and the best quality of food to create their desirable bodies.

Presently there is a Disney film called Frozen targeted at young girls. The two prominent female characters in the film, Elsa and Anna, both have impossibly waspish waists that do not compare to the body shapes of the average woman. This communicates to young women that they too should possess this unattainable body shape which could lead them to feel they are not beautiful.

Looking at the cover of weekly women’s magazines the obsession with body image and what is and is not a ‘good’ body shape is talked about constantly. A female celebrity is said to be unhappy with what should be considered a healthy, comfortable body weight and shape. This headline reinforces the message that women are never as slim and attractive as they can be. It seems that the magazine is perpetrating that women should never be happy with their bodies, that they should never stop pushing themselves.

However there seems to be the beginning of a shift in the ideal of what is considered beautiful in the media. Kim Kardashian was on the front cover of Vogue a women’s magazine with a lot of clout in portraying the ideal of the perfect woman. Kim Kardashian has an hourglass figure removed from the thin, tall women seen on the catwalk and there are is a popularity now for women’s fashion shops such as Evans and Love Yours. These fashion stores do not sell baggy, unfashionable clothes, but fashionable, flattering styles that perpetuate the idea that big can be beautiful too.

That said designers still drape their clothes on the catwalks on models whose slim, tall bodies are far removed from the women who look at and buy their clothes. Until designers and magazine editors put the average woman in their clothes there will be little shift in the body image of women. Female musicians are directing a shift back to curvaceous women on our screens. Consider Iggy Azalea, Nicki Minaj or Jennifer Lopez who all stunning women who defy the slim body image that the media considers perfect. The change over time from womanly figures being prized to women aspiring to a willowy body has been drastic. In the 1950s Marilyn Monroe’s tiny waist and wide hips were considered beautiful while thin, lean women are thought of as the ideal now. 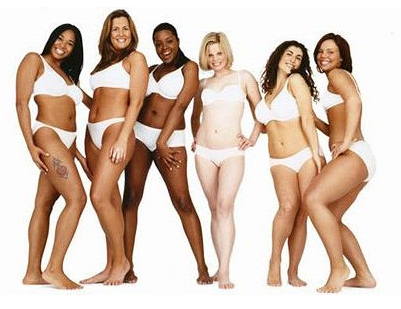 The Dove Campaign for Real Beauty in 2004 aimed to celebrate the natural physical variation embodied by all women and inspire them to have the confidence to be comfortable with themselves.

The pressure to be thin and lean is shown in the push for celebrity women to lose their baby weight. It is natural for a woman to put on weight during pregnancy, but women are made to feel inadequate when they do not lose their post pregnancy weight as famous people do. Singer John Legend’s model wife Chrissy Teigen released pictures of her stretch marks defying the idea that a woman has to blemish free to meet the beauty ideal.

The reaction to society’s preoccupation with the ideal body image has led to the emergence of charities such as BODY which was set up in March 2011. The manifesto of BODY is that everyone is both ‘unique’ and ‘beautiful’ and contradicts the idea that there is one ideal body image that we should all aspire to have. The website goes on to say that they lend ‘support and strength’ to people dealing with negative body image which shows how deep the roots of this issue are. The issue of negative body image is one that is very current and one that effects a lot of people. The charity BODY is one needed by a society concerned with perfection. The charity shows the vital work they are doing by showing the correlation between negative body image and serious mental health issues such as Anorexia.

Do Men Struggle to Have a Positive Body Image?

BODY, a national charity in the UK that work with both men and women, help those who have body image issues. One of the men they have helped, Steve, explains that men find the issue of body image difficult too. “The most infuriating thing about being a guy in this society is now, we – just like the ladies, are expected to give 100% to our physical appearance.

“I used to go to the gym everyday – twice a day.
“I soon felt pretty inadequate when it came to my looks particularly my muscle structure. I became completely obsessed with ‘beefing up’ – to me it was more than just a good looking thing, it was a stature and popularity thing. I had no clue why my arms weren’t growing to the size I wanted them to be when I was putting in so much effort. When my girlfriend broke up with me, I thought it was because I wasn’t big enough. So I gave it everything I could in the gym. I tore muscles, I didn’t give them time to repair. I was controlling my diet stupidly. It got to the point where I was injecting steroids, taking anything and everything to keep me awake and push me harder in the gym. As for my arms, I tried looking into padded sleeves, it sounds vain, but it was a way of life. I wasn’t happy with the way I looked.
“I tried to take my life 24 months ago, and a BODY outreach worker visited me in Leeds. It wasn’t their responsibility, I just happened to find them online and some of the things they said, really rung true.
“I’ve been working on different things with BODY now for that full 2 years. I’ve reduced my time in the gym and actually regained some of my life. I’ve learned a lot from BODY and even more so from this journey that is recovery, none of that would have been possible without this charity.
“I really wish that I had the courage to talk more about body image in public, because it is something that effects guys nowadays and we can’t escape it either.”

So, what is your ideal of perfection? Do you feel like you have achieved it or do you feel that you will never feel your body is perfect?

Check out and share this post on how to have a positive body image by The National Eating Disorders Association (NEDA), a non-profit organisation in the USA.