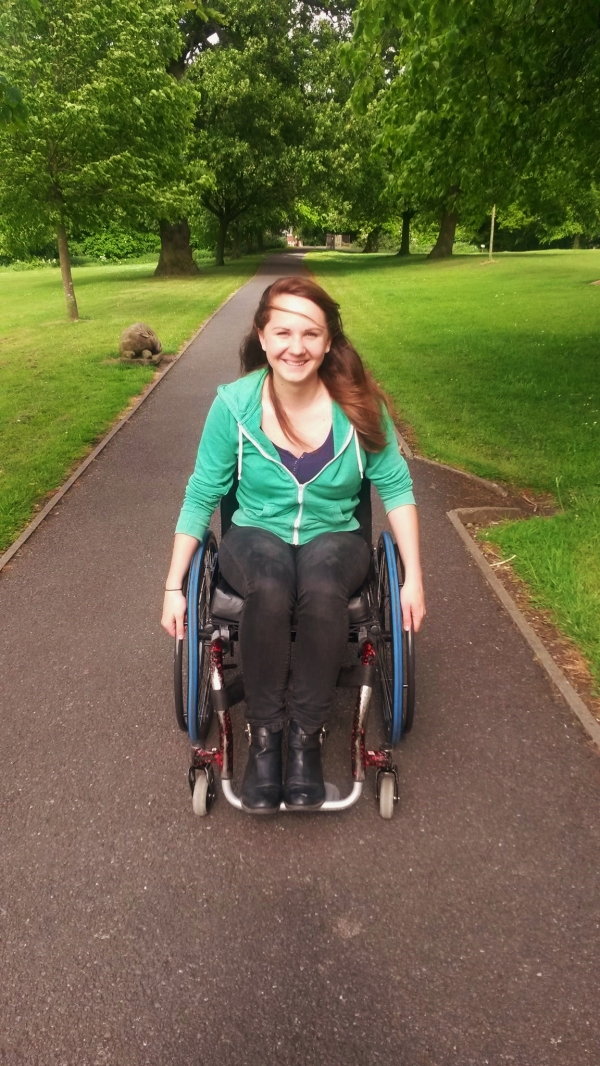 Student Spends a Week in a Wheelchair

The week before a big assignment is due for her Masters course Karen Thomas is taking part in a charity challenge that she set herself: spending the week in a wheelchair. I spoke to Karen on day three of her challenge. Listen to the interview below, or scroll down further for a summary of our chat.

Subscribe to the Good News Shared podcast on iTunes 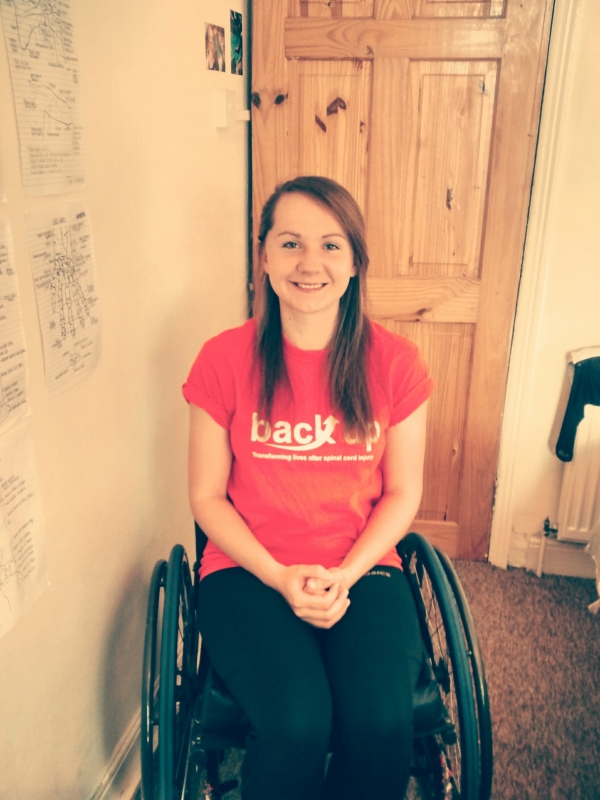 A summary of the interview with Karen:

Karen Thomas, a physiotherapy masters student at the University of Birmingham has been a volunteer for the UK charity Back Up for two years. In 2013, aged 21 years old, a close friend of Karen’s was in an accident and was told he might never walk again. In the early stages of rehabilitation he was told about Back Up, which led to Karen becoming a volunteer.

Back Up is a national charity that has helped thousands of people of all ages and backgrounds rebuild their confidence and independence after a devastating spinal cord injury. Their wheelchair skills training, mentoring service and rehabilitative activity courses are all run by people affected by spinal cord injury themselves. They also support people to overcome the challenges of returning to work or school.

The charity was set up in 1986 by the former British and European Freestyle Champion and James Bond stunt double Mike Nemesvary, whose life was devastated when he broke his neck during a training session.

He didn’t see why this should stop him from enjoying life so he created the charity to initially offer ski courses for people who like him had suffered from a spinal cord injury.

The charity still offers courses but it’s a massive range of courses now. Find out more about the services offered here: www.backuptrust.org.uk/what-we-do

Karen volunteers as a ‘buddy’ on the Skills for Independence course Back Up run. “The role of a buddy is to help everyone in the group have a really positive experience and to get the most they can from it. It means getting involved in every activity offered, providing motivation, encouragement, and getting stuck in.”

“When we were practising wheelchair skills I got into the wheelchair, much to the amusement of quite a few of the participants – they were a lot better than me!”

“It’s not about being an assistant to them it’s more about helping them get the most from the course.”

“On the course I did most of the buddies were physiotherapists, occupational therapists, or like me students in that kind of area. I think the participants find it really useful using us for our knowledge, helping them with things like transfers from chair to car, chair to bed, and things like that which obviously helps them become more independent.”

Karen started volunteering for Back Up while still doing her undergraduate degree. “The physiotherapists who were there buddying were like, ‘Oh you’ll be a brilliant physiotherapist definitely go for it and apply’ and it gave me the motivation to go ahead and pursue that which was really nice.”

Karen is taking part in a challenge to raise money for Back Up and also to raise awareness of what it is like to be in a wheelchair and to have spinal cord injuries.

“What I was aiming to do was to try and carry on with my life as normally as I could and I haven’t had to avoid anything that I would have been doing which is really good.”

“I’ve used the trains, I’ve used public transport, I’ve been to coffee shops and restaurants, I went to university yesterday and the supermarket and the post office today.”

Living up a hill in Selly Oak in Birmingham, England, Karen has had to have the support of her flatmates – “The main area I have had to have a bit of help is wheeling me up hills.”

Karen is incredibly passionate about the work Back Up do, and is doing this challenge to raise money (she has already raised over £400) and awareness.

“If you see something which you wouldn’t normally that’s the best way to bring awareness.”

Every eight hours, someone in the UK has their life changed forever through spinal cord injury. Karen says, “Spinal cord injury is relatively unknown and I thought if I put myself in a wheelchair people are going to have to interact with me and find out what I’m doing.”

Karen has had good experiences at the train stations in Birmingham and in the Bullring shopping centre (though it was a little difficult as it gets so busy, and the clothes are kept at an able-bodied persons height so I had to ask my house mate to get clothes for me). She had a slightly less positive experience at the supermarket today, “one of the staff came and started packing my bag for me without asking me which is a nice gesture but it’s also something I was fully capable of doing.. I think awareness would help that – he might have thought I was unable to do it so I didn’t take offence from it but I think others may have.”

When asked what her highlight is from her two years volunteering with Back Up, Karen said, “It’s the best feeling when someone tells you they can do something that they used to be able to do which they didn’t think they would be able to do again – it’s a massive change in their lives and we have been able to help that.”

“And when we help someone with a transfer from their chair to their bed and it completely changes their perception of life which makes them start to plan to take steps forward after the course, so you know the course has had a long term effect which I think is brilliant.”

To end our chat Karen shared some good news about her week so far: “I have managed to reach out to over 500 people and 15 different countries, that’s something I never thought would be possible but I think it just shows that if we make the effort to do something charitable and promote charities and causes that we feel strongly about, the power which we have as humans is incredible.”

Karen will be posting a video of her cooking tonight on her blog. Check it out here: pursuingphysiotherapy.wordpress.com

Find out more about the work Back Up do here: www.backuptrust.org.uk/home

To listen to the full interview with Karen please click here.