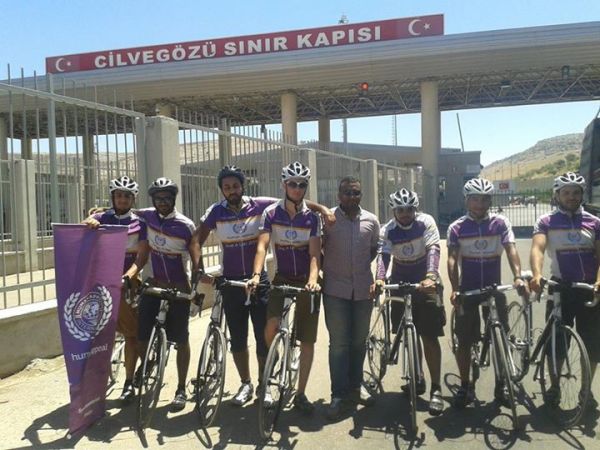 ‘The place was abandoned…the whole thing was flooded, it was damp, there were rat droppings on the ground…the toilets were blocked and coming up…it was one of the worst places I’ve stayed in my life.’ It was in May of 2014, on a summer’s day in Dover, that a group of young Muslim students stayed in a run-down mosque. They were cycling from Scotland to Syria to raise money for the victims of the Syrian conflict.

They were amateurs, most having little to no cycling experience. The founder of the project, Hassan al Husari (20) hadn’t cycled since ‘[he]was ten.’ He had the idea for the project in 2013 after doing a number of long distance, endurance-type runs for charity. Originally he thought about walking to Syria. But, after realising it would be ‘a long, long walk’, he decided cycling would be more realistic. So he began asking his friends and family about his idea, hoping to gain some support.

However, everyone simply brushed off his idea as crazy, or unrealistic: ‘I don’t recall any person supporting the idea at that time…’ After four months of dealing with criticism, he decided he was going to do it ’regardless of what [everyone thought, knowing that he was going to]prove them wrong.’

He bought a bike and started training. ‘Training was very tough, cycling everyday, 15-20 miles, with a bag full of books and a laptop.’ He was determined to make his idea work, he was willing to sacrifice in order to bring his dream to life. Eventually this lead to him sell his car in order to remove the option of not cycling when it rained.

Six months later, he was sitting in an ice cream parlour when he bumped into Rameez Mahmood and his friends: ‘it was the first time I’d ever met him, and the guy was insane. He was like ‘’do you want to cycle to Syria? I thought it was a joke at first…’

Again, everyone laughed at his idea.

But then, suddenly, after half an hour of conversation, ‘Rameez got a bit serious and said ‘’actually, I might do it.’’‘ Hassan told him to buy a bike. He was hopeful, but he still doubted whether Rameez was actually willing to cycle 3300 miles to Syria with him.

‘After a week I got a phone call from Rameez saying ‘I’ve got a bike now, and I’ve spoken to my parents and they granted me permission to join you.’ This was the turning point for Hassan, he now knew the project had the potential to succeed. They began cycling together, raising awareness, fundraising – they did everything possible in order to bring the project to life. ‘From that day, I knew Rameez would stick to it from the beginning to the end.’

Hassan soon realised he would need professional support to give the project grounding. He met with Human Appeal, an international charity that has been working in Syria since the conflict began in 2011. After a number of talks, they eventually agreed to support him.

With Human Appeal on board, the team began recruiting others for the project. They managed to recruit eight core members who would travel the full 3300 miles to Syria and a further fifteen who would stop at London and Paris. The team set off from Scotland on the 17th of May 2014. They cycled an average of 70-80 miles a day. 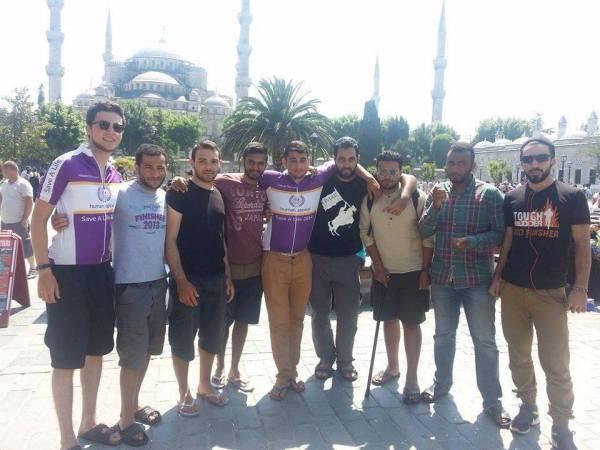 However, the trip was far from being problem free.

‘It was quite shambolic at times.’ On the first day, they were supposed to cycle seventy miles but cycled 86 because they kept getting lost. Their cycle leader was using a sat-nav on his mobile – a tactic that landed them on the motorway a number of times.

In Buckingham, after an eighty mile cycle, they pitched their tents and bedded down for the night. Suddenly, they heard the pitter-patter of rain. Their tents weren’t water proof so by 5AM they were soaked. Although they were frustrated, the experience also motivated them. Speaking about the Syrian refugees, core team member AbdelRahman Rizq said:

‘Imagine, they actually live in these situations everyday. We struggled to sleep because of the sound of the rain…[but]for them it’s not just rain, it’s bullets.’

Finding accommodation was a constant struggle throughout the trip. On a humid night in Milan, they were locked in a small room inside a Mosque with only ‘a small bucket of eggs and potatoes that had been lying in the van for 3 days’,  to eat. They were told it was too dangerous for them to go out at night- something that was most likely untrue, as they were welcomed by the Italian people with kindness and generosity.

They also slept in camp sites and at one point, in a ghetto in Athens. ‘We were scared to leave the hotel, there were police and drug dealers fighting outside. There were people injecting themselves right outside our windows.’

Aside from the difficulty of finding accommodation, the trip was far from being free of injuries. ‘We could’ve died so many times.’  In Turkey, whilst cycling on the motorway past lorries driving at 90 mph, Rameez Mahmood had an accident: ‘I’m cycling on the motorway. I don’t see this cone, so I hit it and skid across the ground, and the cyclist behind me runs me over. I’ve got this big scar across my back. I think I passed out.’

I asked him, ‘did you go to hospital?’

‘We didn’t have time to go to hospital. Allah was looking over us.’

They cycled through Greece until they reached a bridge before the Greek/Turkish border. Here they were met with soldiers who pointed guns at them and prevented them from crossing. Eventually, hiding in the back of a van, they managed to cross the bridge. But then they were delayed again for six hours whilst waiting for their contact from Human Appeal. Eventually they made it into Turkey. 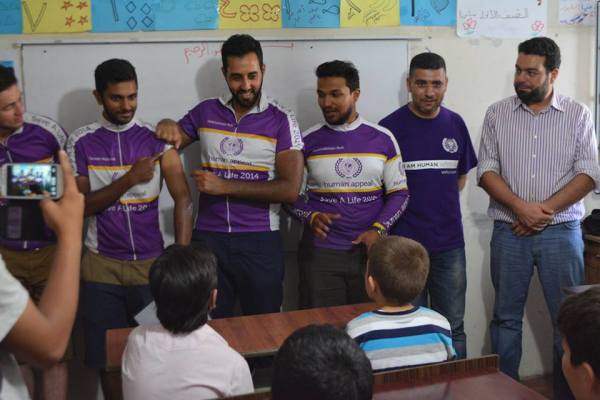 Hassan, Rameez, AbdelRahman, Anas Sawalem [L-R] at a School at the Syrian border

In Istanbul they were put in contact with the media and thereafter they travelled to the Syrian border. Here they visited a school, a bakery and a rehabilitation centre for the casualties of the conflict. 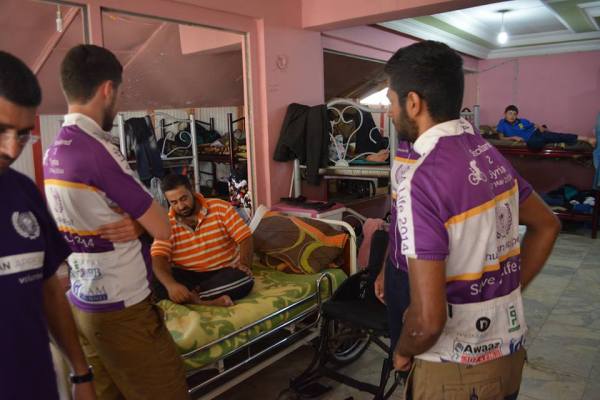 Rameez and Hassan at the Rehab centre

They met a man who was in a wheelchair. He told them that he would go back into Syria to keep fighting as soon as he could walk. ‘If I don’t go to protect my family, no one else will. I have nothing else to lose.’

The team raised £160,000 to build a village in the ‘safe zone’ between Turkey and Syria. The village will accommodate a thousand widows and orphans and will provide a school, a hospital, a care home, a shelter and a public kitchen for those in need. It should be completed in June this year.

The eight Muslim students returned safely back to the UK on the 26th of June 2014. The team continue to engage in charity work and have recently walked 5km to raise money for the children of Syria.

The team members have been significantly changed by their journey to Syria. They learned about themselves, about each other and more importantly they gained friends who will remain with them for the rest of their lives:

‘We went through the cycle as strangers, we left as brothers.’ 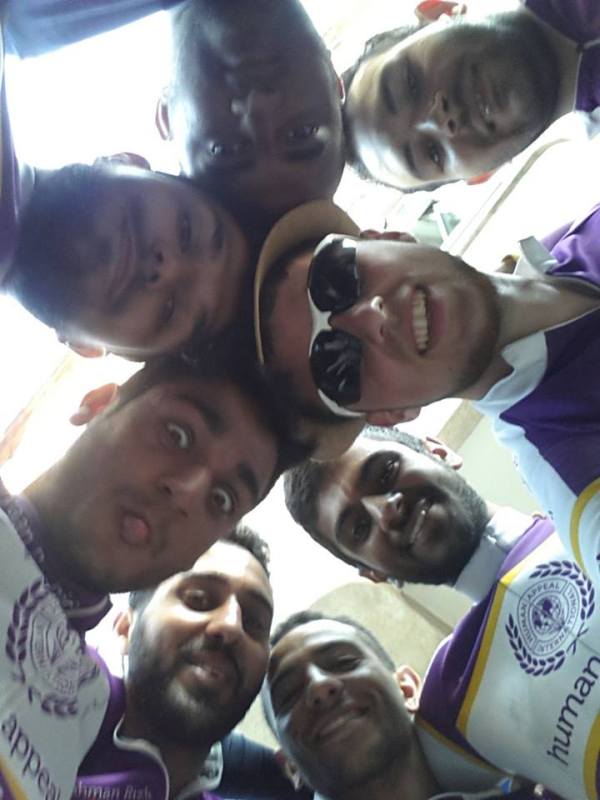 Human Appeal have recently placed a team in Nepal to provide aid for the people devastated by the recent earthquakes. For more information on the work Human Appeal do please click here to visit their website.

Zakariya is a writer, filmmaker, martial artist and philosophizer about things like personality and logical fallacies. He has created three new poetic forms and enjoy drinking tea