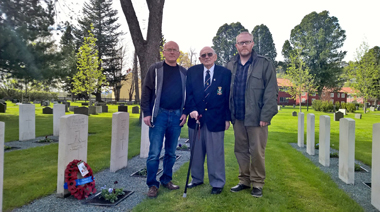 After Edward Harrison was killed in action near Steinkjer, Norway in 1940 and buried nearby, his brother Arthur Harrison spent 75 years separated from his final resting place, hoping for the chance the visit.

This wish was granted by the generosity of The Elite Fish and Chip company who offered to pay “whatever it cost” after Arthur won their competition – despite an original cap of competition prize money of £250 – and organised for Arthur to visit Trondheim (Stavne) Cemetry, where his brother was laid to rest.

Arthur, 91, also visited By Farm, where Edward died, and Krogs Farm, where a Second World War battle had taken place.

Private Edward “Ted” Harrison served in the 4th Battalion of the Royal Lincolnshire Regiment. He was killed in action 2km north east of Steinkjer after the German air force destroyed the city. He was initially buried in a field after his death aged 21. He was then moved to a church in Egge, a nearby village, on May 17 1940 – Norway’s National Day.

Arthur and his family were overwhelmed by the experience, with Arthur describing it as “marvellous – out of this world”.

Arthur, who himself served in the Royal Navy, defending India from Japanese invasion, said “The experience has helped me discover the answers about what happened to my brother and helped me to finalise what was left open all of these years. I’m so grateful to Elite and everyone I met.”

His grandson, Robert, who travelled with him, said: “Grandad has a smile from ear-to-ear.”

His daughter, Susan Fox, recounted how this trip had been a dream of both Arthur and his entire family for years, but had not been fulfilled at Arthur’s selfless insistence that the trip shouldn’t be undertaken at the family’s expense. “We want to thank the Elite Fish and Chip Company most dearly for choosing us as the winner of the competition”, she said.

Adrian Tweedale, owner of the Elite Fish and Chip Company, was touched by Arthur’s story from the start. He recalled how the Christmas Wish competition “received nearly 400 wishes but Arthur’s wish really moved us. Family is so important.”