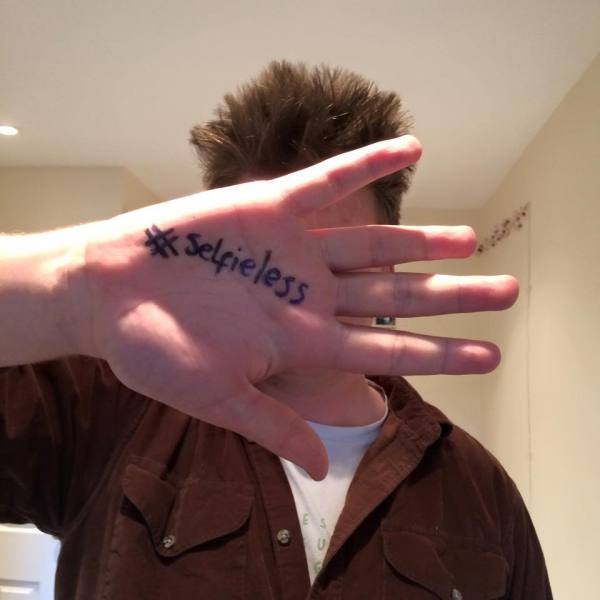 Following the success of social media campaigns such as the Ice Bucket Challenge and #NoMakeupSelfie, inspiration flooded the minds of Exeter University students to raise awareness of homelessness and donate money to the shelter charity YMCA.

#Selfieless has seen soaring popularity through sites like Facebook and Twitter where the users upload a photo with their hand covering their faces as seen below on Huw Hides, the campaign leader, which is to show the loss of identity homeless people face and the taboo culture of homelessness particularly in young people. “We’ve been in the local newspaper, the front page of the Exeter University newspaper, Exeposé, and even on local radio! It’s been great to see this support, but we’d love for even more people to get on board!”, says Hides, 21.

Similarly to the previous social media campaigns it is easy to donate by text by “YMEX15 £2” to 70070 to donate £2 to Exeter’s YMCA charity. The YMCA charity is nationwide that not only supports homeless people but also vulnerable people through youth and family work and health and wellbeing.

The campaign is part of the YMCA society at Exeter, which exists to try and get students engaged with combating homelessness: a massive issue across the country and especially in Exeter. Speaking to Huw he said:

“We believe everybody deserves a safe place to call their own, a roof over their head, and to be treated with dignity. Through the #selfieless campaign, we’re trying to highlight that homelessness isn’t just about not having a roof over your head. Often what people experience is a loss of identity as well. It’s far too easy to walk past a homeless person on the street and just see “another homeless person” and not recognise that each person has family, a background, stories to tell and an identity. Through posting a #selfieless, and concealing your face in some way in the photo, we’re hoping to highlight this issue which people so often ignore, as well as raising money for YMCA Exeter at the same time.”