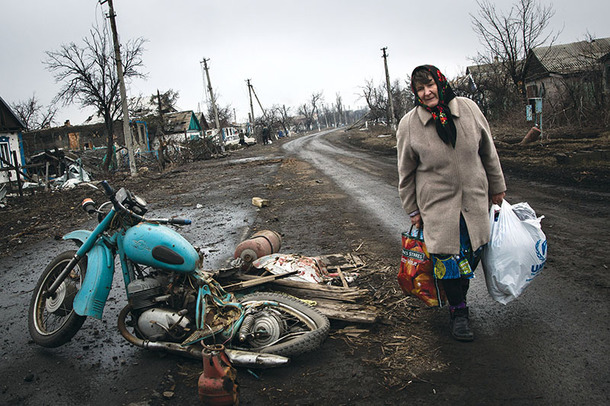 Galina, 65, walks along the main street in Nikishino village, in eastern Ukraine, on March 1, 2015. “I’m 65 and everything I have I’m holding,” says Galina. She has just returned from her destroyed home were she salvaged what she could. UNHCR / A. McConnell / March 2015
Transforming Lives

Mission Without Borders’ Work in Ukraine

By Nicola Doherty on August 6, 2015 0 Comments
Galina, 65, walks along the main street in Nikishino village, in eastern Ukraine, on March 1, 2015. “I’m 65 and everything I have I’m holding,” says Galina. She has just returned from her destroyed home were she salvaged what she could. UNHCR / A. McConnell / March 2015

Crisis in the Crimea

Conflicts can come in all shapes and sizes, requiring vastly different interventions to bring them to a resolution. Sadly some never resolve. In the Crimean region in the Eastern part of Ukraine at this present time, a situation has unfolded, the ramifications of which are having a catastrophic effect on the people there.

The much-reported annexation of the Crimean region of Ukraine in February 2014 by Russia set in motion a sequence of events that has culminated in the humanitarian disaster that we see today in Ukraine. The Crimean region in has long been a site of contention, territorially speaking. The country of Ukraine gained its independence from Russia at the end of the Cold war in 1991. The region known as Crimea, bordered by Russia to the east contains a large proportion of people, indeed a majority – albeit a small one – who are ethnically Russian. The election of the pro-western president Petro Poroshenko and the removal of the pro-Russian former president, prompted Russia’s Vladimir Putin to seek to make Crimea the 84th region of the Russian federation. The annexation that followed and the ensuing incendiary crisis is having devastating consequences for the Ukrainian people.

According to reports from the UN Office for the Coordination of Humanitarian Affairs (OCHA), 5 million people are currently in need of humanitarian assistance, including 3.2 million individuals considered highly vulnerable. Of particular note is that women, children and the elderly are among those suffering serious human rights abuses including torture, executions and human trafficking.

According to the UN’s latest figures, 1.3 million Ukrainians are internally displaced. Moreover, there are reports of serious human rights violations and embargoes blocking aid from accessing the disputed region. Sadly this only serves to deepen an already desperate humanitarian crisis in the country.

The charity Mission Without Borders has been working in some of the poorest parts of Eastern Europe since 1960. They serve the spiritual, emotional, physical and material needs of those suffering poverty or oppression. Mission Without Borders’ (MWB) locally staffed office in Ukraine has sent several truckloads of aid to communities affected by the conflict in Eastern Ukraine. Each truck contains essential items including food, clothing and construction materials. The charity has also provided key assistance to Luhansk Regional Hospital, delivering much needed medical beds, mattresses and hygiene items. Those displaced are experiencing difficulty accessing emergency food, water, shelter and medicines, while funding allocated to humanitarian operations remains critically low. MWB is working in partnership with local churches, government agencies and partner NGOs across Ukraine to help refugees meet their basic needs. 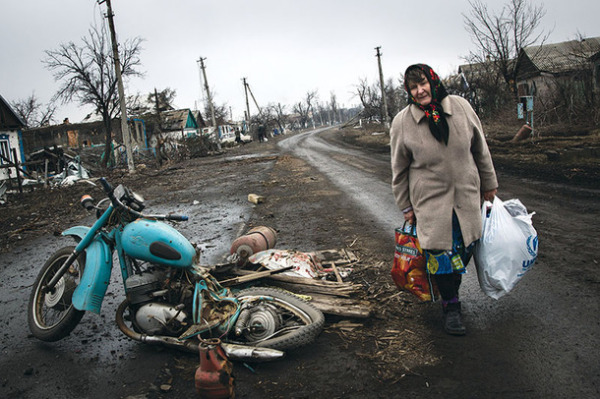 Galina, 65, walks along the main street in Nikishino village, in eastern Ukraine, on March 1, 2015. “I’m 65 and everything I have I’m holding,” says Galina. She has just returned from her destroyed home were she salvaged what she could.
UNHCR / A. McConnell / March 2015

The charity has also made special provisions for rehabilitation and counselling services for children experiencing trauma, and will be running a special summer camp for approximately 100 refugee children.

The situation in Ukraine is volatile and the potential for a full-blown humanitarian emergency is real. Neither the government of Ukraine nor the international community is sufficiently prepared for what could be mass displacement, human rights abuses and the spread of disease should the violence continue and the political situation remain unresolved, particularly in the country’s eastern regions. Gang warfare between pro-Russian separatists and pro-Ukrainian groups in the East has further spiralled this troubled region into turmoil.

What about the way forward. Carly Jones, National Manager for Mission Without Borders says: “We remain very concerned for the people of Ukraine and the long term impact the conflict is having on communities. Access to water is a critical issue with up to 1 million people at risk of a lack of access to safe water.” She continues, “We are keen to highlight it’s not just the eastern region that’s been affected, but across the country internally displaced refugees need shelter and support.”

Clearly, this situation is in desperate need of a resolution, and soon. Mahatma Gandhi once wrote about conflict, “What difference does it make to the dead, the orphans and the homeless, whether the mad destruction is wrought under the name of totalitarianism or in the holy name of liberty or democracy?”

For the sake of the people of Ukraine as well as for the future stability of the region, one hopes that a solution is imminent.

If you would like to know more about Mission without Borders and their work in Ukraine, you can visit their website www.mwbuk.org or email info@mwbuk.org.