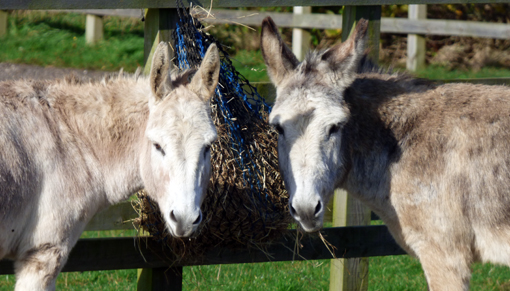 When Harry met Derek: The Start of a Beautiful Friendship

By Nisha Kotecha on November 24, 2015 0 Comments
Derek and Harry

Our ‘Amazing Animal of the Month’ for November 2015 is Derek, a donkey who has adjusted really well to life without his buddy Clive.

Donkeys form extremely strong bonds and the loss of one of a pair of close friends can pose a real threat to the health of the survivor. When beautiful donkey Clive passed away following a severe bout of colic in September, everyone at Redwings were concerned about his good friend Derek.

Derek needed a special friend of his own again as autumn came and the donkeys were due to be stabled at night. Derek definitely didn’t want to be in a stable by himself. So a very special friend request went out within Redwings Sanctuary to find a perfect companion.

Meet Harry, a gentle 12-year-old donkey. He was carefully transported to Aylsham at the end of October and introduced to Derek as the team held their breath and crossed their fingers.

Derek and Harry have been inseparable since meeting

But they needn’t have worried –Derek attached himself firmly to his new pal and the pair have been inseparable since!

“It was a very special moment and a great relief,” said Louisa, a member of the horse care team at Redwings Aylsham.

“Having been with Clive for so many years, we knew he would want his own best buddy again, as so many donkeys do.

“He perked up straight away when he met Harry and he is very much back to his old self now, it’s wonderful to see. Harry is a sweet-natured gentleman and we love having him here at Redwings Aylsham where he is already a big hit with visitors.”

You can meet these two best friends for yourself at Redwings Aylsham for free! The centre is open on Fridays, Saturdays, Sundays and Mondays throughout the year between 10am and 4pm and Derek and Harry would love to see you! Click here for more information about visiting Redwings Aylsham.