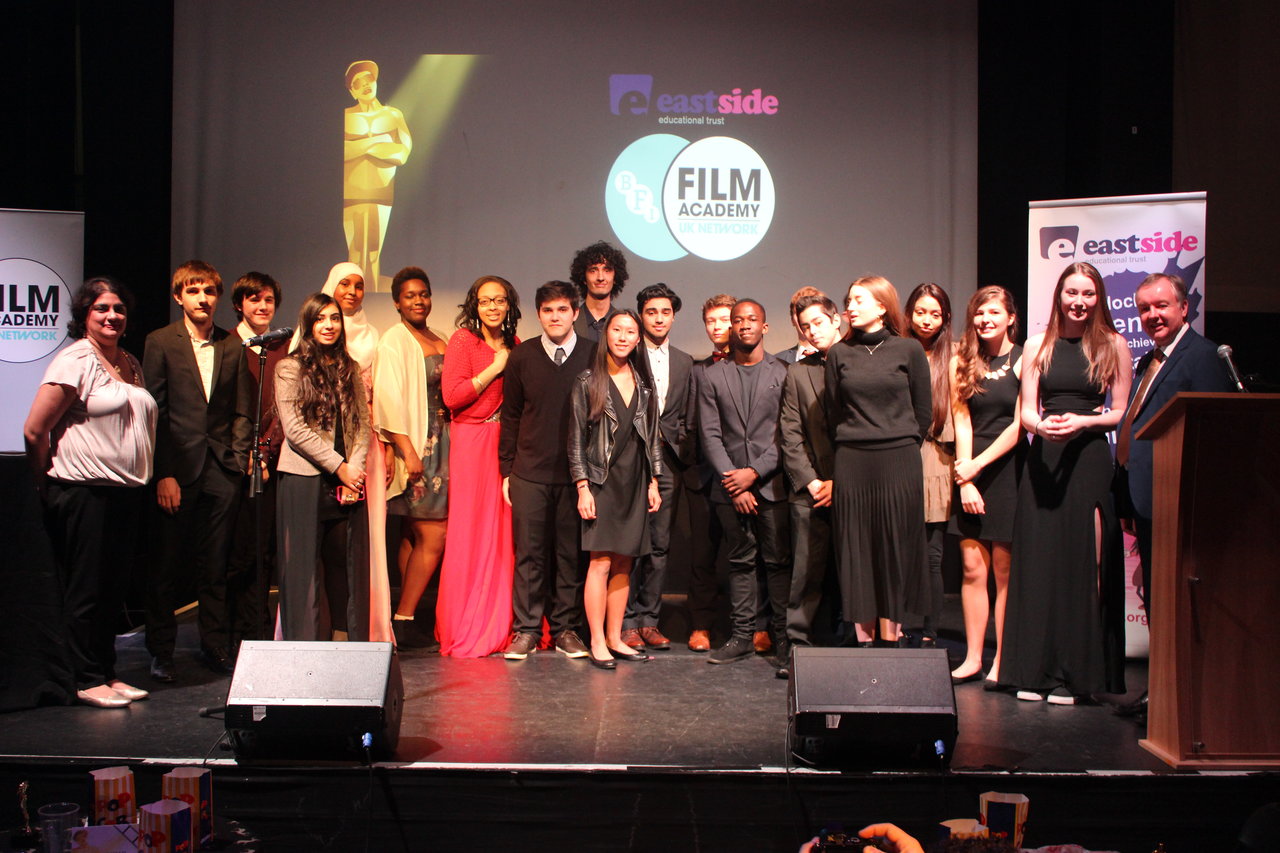 22 BFI Film Academy students stepped onto the red carpet and into the limelight at Rich Mix Arts Centre on Saturday 30 January to an audience of more than 100 to show the culmination of three months of filmmaking as they premiered 5 short films.

The film premiere was followed by an award ceremony celebrating the achievements of the 22 young people aged 16 – 19 who have been honing their craft skills in film working with Eastside Educational Trust.

The five films explored the theme of choices but the participants were also all required to include a key at the heart of their film.  The five films included: Dona’s Diary – one girl’s mysterious discovery unlocks a secret with dire consequences in this chilling thriller. Repressed – a man tries to piece together the events of the previous night, but will he like the truth he discovers? A disturbing drama. The Key Within – Three women, one room and no exit…or is there? This psychological thriller is bound to make you squirm. Stolen – a woman on the edge, finds that one small impulsive decision can cause a huge impact in this intriguing drama.  A Matter of Time – a young man gets more than he bargained for when he discovers a key with magical powers, but is it too good to be true?

Eastside’s Director, Rakhee Jasani, also spoke about how the BFI Film Academy is very diverse. “News about the Oscars has been dominated by the lack of diversity amongst the nominees. I am very proud to be a part of the BFI Film Academy which from the very outset has been unashamedly diverse. 60% of the films you are about to watch were directed by young women and 50% of our participants come from Black and Ethnic minorities. Right across the country the BFI Film Academy is training a diverse generation of emerging film talent.”

Throughout the three month course which started in October, the participants met a range of professionals working in every area of the film industry and participated in workshops and masterclasses to develop their skills including sound, editing, lighting and screenwriting.  They then worked in five small groups to develop, script, shoot and edit their original ideas producing films that explore a variety of different genres including psychological thrillers, documentaries, and romcoms. Some even got the opportunity to collaborate with Adobe regarding a new platform: Project 1324.

Jess Wood – aged 17 and currently in the last weeks of complete the course – was the cinematographer in her group – her film won the Audience Award for Best Film at the screening on Saturday. She said, “The BFI Film Academy at Eastside has been an absolutely amazing experience that I will never forget. I learnt so much there and was able to develop my skills as a cinematographer and meet new people and industry professionals. Having our films screened at the RichMix was so fun and it was great to see every team’s finished film that they have worked so hard on and the awards ceremony made it even more special. Everyone at Eastside has been so supportive and I will be forever grateful to them.”

Following the screening Jess received even more great news – she has been accepted on the prestigious NFTS (National Film and Television School) Residential course.

The participants will all now complete their Silver Arts Award and Eastside will be following, and supporting, their success. One of Eastside’s Film Academy alumni is now working as third assistant directors of feature films, another is the youngest film-maker to study at the National Television and Film School and many others have been accepted onto film production university courses.