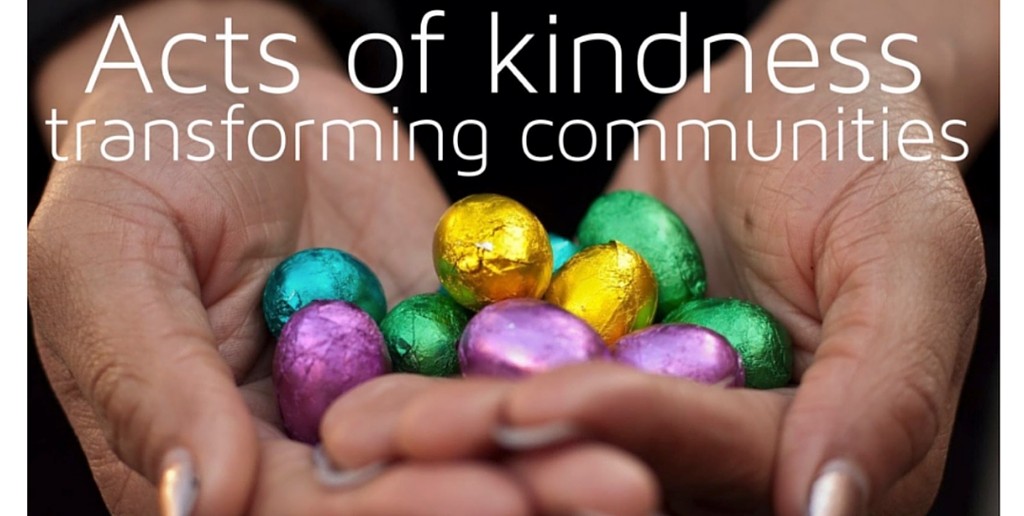 Sharing the Miracle of Kindness at Easter

Thousands of people across the UK will be surprised with chocolate eggs and other gifts this Easter as hundreds of groups and individuals ‘share the miracle’ of kindness with neighbours, complete strangers and organisations and charities in their communities.

Easter eggs and other gifts are expected to be given out to homeless people, children in hospital and elderly people, amongst others.

For the fourth year running, people in towns and cities up and down the country will be part of a movement which began in 2013 when Dan Usher decided to buy 100 chocolate eggs from a local supermarket and give them away to people in his community.

The movement has grown year on year. In 2014, the initiative spread and over 7,500 free Easter eggs and other gifts were handed out. Last year 15,000 people across the UK received gifts. 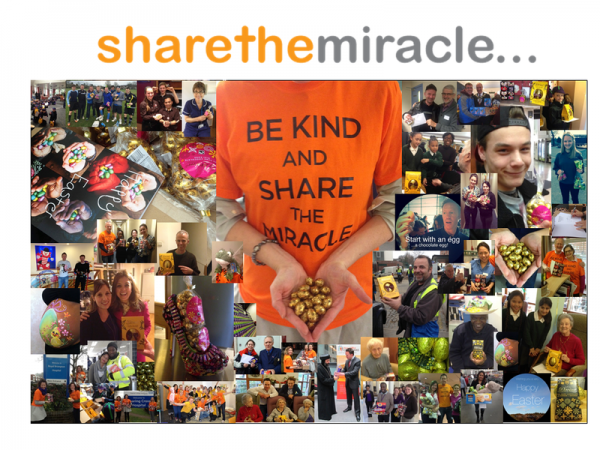 “The aim of ShareTheMiracle is very simple – to show kindness and help to release hope across communities, with neighbours, friends and local organisations,” says Dan Usher.

“I believe Easter is a time of new life and hope, so what better time of year to transform our communities, break down some of the social barriers which keep us apart and start new friendships?”

“Relationships are the key to healthy communities and it’s down to each one of us to play our part in creating the world we want to live in. We are all ‘designed for kindness’ and although giving out a gift, or an Easter egg – which is a symbol of new life – and extending an invitation to a community or social event, might seem a little thing we believe a simple intentional act of kindness can begin to change our world!” Dan says.

ShareTheMiracle invites people to form local groups, and gather chocolate eggs either by buying them or through generous donations from local companies. In 2015 volunteers met and gave gifts to around 15,000 people in places as far afield as London, Surrey and Sussex to Leicestershire, Northamptonshire and Birmingham. It wasn’t just individuals that were contacted, but also groups, agencies and local organisations including government officers, schools, elderly people, business colleagues, Saturday shoppers, homeless people and victims of human trafficking. Volunteers also visited and treated Great Ormond Street Hospital in London, handing out toys and gifts to the children there and this is expected to happen again in 2016.

“This year ShareTheMiracle is scheduled to run from mid-March to the Easter weekend (25th to 28th March, 2016) but it’s really down to local groups to decide when the best time is to share a little happiness and hope to those around them. Whether you get together with other friends, or work colleagues, or you just go it alone, we’d love 2016 to be biggest and best year yet for ShareTheMiracle,” says Dan Usher

Each egg or gift is accompanied by an Easter invitation card. Neighbours may be invited to dinner, an elderly person might receive a personal invitation to a social club and parents can be invited to be part of a local parent and toddler group. Teenagers may receive an invitation to a local activity or mentoring group, and some of those handing out invitations with their gifts may choose to encourage people to attend a special community Family Fun Day or Easter services at their local church.

The special invitations can be ordered from the website – ShareTheMiracle.org – where there is also loads of information to help groups start sharing acts of kindness in their communities. Stories of communities transformed by ShareTheMiracle can also be found on the website.