Student Volunteer Award Winner Inspiring Us All to Start Volunteering

Liam Rodgers is the winner of the 2016 Student Volunteer Award, which he won due to the continuing success of Upscribe, the project he set up in 2014 to encourage disadvantaged people to express themselves through writing.

The Student Volunteer Award is now in its 15th year of running to raise awareness about student volunteering and social action, and to hand out credit to the students already dedicating their time to the community.

100 inspiring students were nominated from across the UK, which was then reduced down to 10, and then 5. Liam says he was “completely gobsmacked” to discover he had won; he had spent the afternoon cycling round London with his daughter, simply enjoying the day.

He was awarded an £1000 prize, a third of which he immediately donated to another nominee, whose work helping schoolchildren living in poverty get a new school uniform inspired him (Kathleen’s Back to School Bank). He is also donating part of the money to the homeless charity which he first worked with, and the rest to a refugee group he supports. 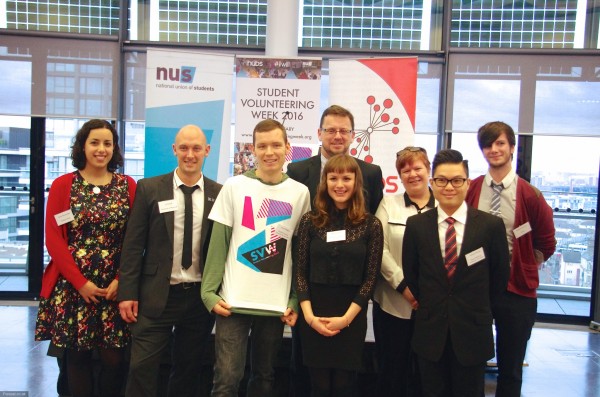 Liam is a creative writing student at Sheffield Hallam University who first got involved in volunteering work after a volunteering day at his university, where he met some women working for a local homeless charity in Sheffield. He was interested in helping, and came up with the idea almost on the spot to try introducing them to creative writing. He was granted funding from the student union, and his project grew from there.

With Upscribe, Liam and some of his fellow English or Creative Writing students spend one and a half hours per week with vulnerable people, giving them writing tasks, such as writing poems, short stories, recording their dreams, or keeping a journal diary. After instructing and helping them for four weeks, Liam and the others take a month to edit all the material they have collected, and then publish it themselves. Liam stresses that getting something published is not as hard as you would believe. He doesn’t use an agent, he simply publishes material online, and also as paperback books.

As well as being published in national magazines, they are also given a writers fee. Liam told me a story about a homeless woman he worked with for three months, as she felt very badly about herself and suffered with dyslexia. He sent her work to the Big Issue magazine, and it was published, which Liam describes as precious to him. However, it was her doing all the work, Liam protests, he is simply doing what comes naturally to him, helping people find joy in writing, just as he does.

He supports many disadvantaged groups of people, as these are the most underrepresented groups not only in the publishing world, but in wider society, including ethnic minorities, ex-offenders, disabled individuals and children in care. To Liam, helping people to write their stories is a way of boosting their self-esteem and confidence, and to take away part of their label of being ‘homeless’, as they can tell people they are a ‘published writer’ instead.

As well as his passion for creative writing, Liam also extolls the virtues of participating in volunteering. He loves the satisfaction that doing community work gives him. He strongly believes that universities don’t put enough emphasis on volunteering; for him, advertisements to attract students to certain universities should not be about the nightlife, but about the opportunities for work experience and volunteering that will be available, as this is what will be most useful when students graduate and are looking for a job.

Liam is currently working with refugees and asylum seekers from Syria, whose lives were destroyed 4 months ago. He wants to help transform their lives from being a statistic to a published writer, which will help them to become established in their new country. Liam has also published his own book called ‘Dogknife’ in 2014, which can be found on Amazon.