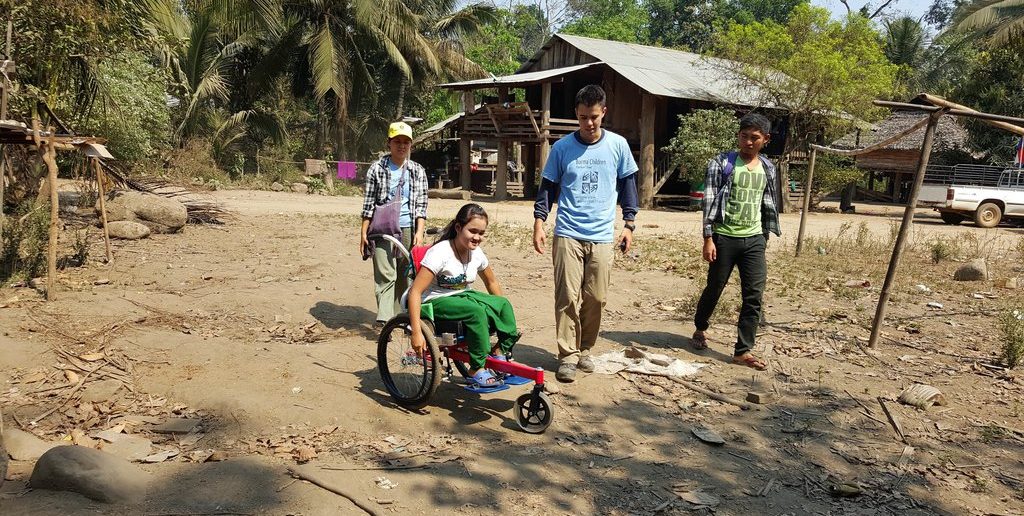 A Day in Karen State: Transforming Lives with Wheelchairs

By Nisha Kotecha on April 27, 2016 2 Comments
Royce with a delighted new wheelchair user in Karen State

Volunteer Royce Tsukayama became a member of the team for Burma Children Medical Fund, which goes on medical missions to the forgotten people of Karen State in Burma.

Intrepid team from the charity Burma Children Medical Fund reach the remote villages of Karen State, Myanmar, from the Thai-Burma border. They take wheelchairs and bring back patients for life-changing medical treatment.

He shares his experience below:

A day in Karen State, by Royce Tsukayama

On a warm, sunny day in March, 135 new children’s wheelchairs were delivered to Burma Children Medical Fund (BCMF) situated in the Mae Tao Clinic grounds on the Thai-Burma border.  They were from the charity organisation, Wheelchairs for Kids.  The boxes of wheelchairs – one wheelchair per box – were neatly stacked awaiting transport to their new homes.  A day later, we loaded six unassembled wheelchairs into vans destined for children across the border in remote Karen State villages.

In the comparative cool of two air-conditioned vans full of the new equipment and urgent medical supplies, our team headed north to a crossing point on the Moei River – the natural barrier between Thailand and Myanmar. The two vans made their way up the meandering two-lane highway passing by sleepy towns, agricultural fields, rubber and teak forests, police checkpoints and Mae La Refugee Camp – home to 35,000 forgotten Burmese people.

Our crossing point in Thailand is from a small town just off the main highway. Cutting through the Thai town’s streets towards the river, after a few crisp 90 degree turns, Myanmar boldly presents itself, capturing all in sight.  Overhead, the sun’s rays pierced the clouds in anticipation of the hot day to come. Just across the river, majestic white and gold stupas are sparsely perched upon the undeveloped Burmese soil as the looming mountains in the west govern the land.

During the present hot season, Thailand and Myanmar are no more than 40 yards apart, divided by chest deep water, depicted by people holding their belongings above their heads as they wade across. Aside from serving as an unofficial gateway between the countries, this section of the Moei River is also a playground for children, a shower for families, and a means of livelihood for boat drivers. At the riverbank, several young men loaded up the wheelchairs onto long, motor-powered boats as we distributed ourselves among the other boats and were guided on the brief cruise away from Thailand.

On the other side, we traversed over bumpy dirt roads, bouncing in the beds of crowded pickup trucks, accompanied by our local escorts. The convoy of three pickup trucks kicked up a trail of dust that spiraled into the air and fell onto every square inch of my exposed skin. A short drive up the hill brought us to the first town of Kyawt Kay Hta.

Stopping on the flat stretch of dirt road, we hopped out of the vehicles as the dust settled. A small flock of goats fed on a medley of dried grass and plastic wrappers while the villagers slowly gathered towards us curious at these strange intruders. When they saw the wheelchairs we were immediately welcomed by their characteristic red-stained toothy smiles, accumulated by years of chewing their beloved betel nut. Following a brief meeting with local leaders and medics, we loaded ourselves back into the trucks and endured a long hour through the narrow, winding, dusty Karen State road to our next destination – the village of Theit Maw Khu.

Local clinic staff had already contacted BCMF about a patient; a nine year-old boy. When the team had visited his home earlier he was lying helplessly on his back while his mother spoon-fed him some porridge. This deliberate process was painful to watch but essential for his survival. Although born with normal human function, a high fever two years prior had left him unable to move or communicate. He required full time care and expensive items such as fresh diapers – a luxury in Karen State. After identifying him as someone whose quality of life would be improved with a wheelchair, we returned to his home with the new chair. No longer confined to the floor of his family’s small wooden home, he was able to leave the premises of his house and see the village the first time in three years. This was not only a great moment for the young boy; it was one that his family shared together. 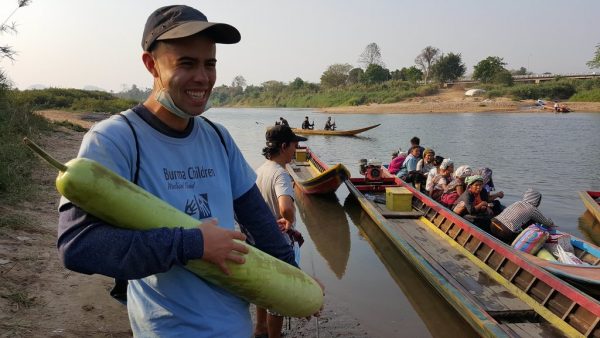 Royce (left) with supplies coming across the Moei River

Members of neighbouring villages made hour-long journeys once news had spread of our wheelchair donations. Two girls were fitted up; one with cerebral palsy and one with an orthopaedic condition. As the wheelchairs were assembled the children in the village gathered around curiously, until gradually we were surrounded by a small crowd.  Elderly women crowded shoulder to shoulder under the thin strip of shade provided by the clinic’s roof.

Once the wheelchair was properly fitted for the teenage girl with the orthopaedic condition, we pushed her around the village as she sat proudly on her new throne. Even when she struggled to guide herself independently over the bumpy terrain, her smile never waned.

After a traditional meal of talapot (Tar Ka Baw), fish paste, vegetables, and rice eaten by hand while seated on the floor, we returned to Kyawt Kay Hta where prospective patients with a range of issues were waiting to be seen. One of these patients was a 19 year-old girl named Mu Chu Lu.  When the team had seen her on a previous visit she presented with abnormal masses on her neck; one the size of a large fist. When she was 12 years old, her neck mass was nascent and only the size of a fingertip. She sought treatment in Thailand but the condition remained.  It did not cause her pain, but it was irritating and gave her a burning sensation. As the mass grew, she became extremely self-conscious and discontinued school to help her mother and father work on their farm. Chu Lu and her mother looked for treatment across Thailand and Burma for the next few years. They went to free clinics in refugee camps on the Thai side of the border. They went to over 10 traditional healers to no avail. They tried another free clinic in Thailand before being rejected for surgery by a hospital in Hpa-an, Myanmar. At this point, she returned home feeling sad, shameful and hopeless.

In her home village of Htee Ka Haw, medics at the local clinic kept in close contact with BCMF. They encouraged Chu Lu to meet with us once back in the region and during earlier visits she had often had to wait all morning and afternoon to be seen. Eventually she was told to return on the day we were to deliver the wheelchairs. She was told to be prepared for a long holiday, because she would be receiving care.

On the day we delivered the wheelchairs we took Chu Lu and seven other patients from outlying villages back with us to the Mae Tao Clinic where they were to receive further care.

Now, Chu Lu is in Chiang Mai undergoing investigations by Thai medical professionals. She is scheduled for surgery next month.

After two months of interviewing BCMF patients, I have heard dozens of incredible first-hand accounts of the journeys they have made to receive healthcare. With my experience in Myanmar, I was able to physically see and finally understand where our patients are coming from.

It is invigorating to witness, on the grassroots-level, what a group of individuals can accomplish over the course of one day. To some, a wheelchair was provided – a symbol of independence to the user and relief to the family. For others, hope was provided – the notion that after seven years of physical deformity and psychological anxiety that maybe things will improve. As for me, I was reminded of a valuable lesson. Wherever there is life, there will be struggle.  But with passion and the collaborative efforts of a few individuals, our struggles and successes can be shared.

The Burma Children Medical Fund (BCMF) was established in 2006 in response to the increasing number of children on the Thai-Burma border who required complex medical treatment and surgery that is not available at local clinics or hospitals. Prior to BCMF being established, children who required surgery had their symptoms treated and lived either severely incapacitated lives or died prematurely as a result.

In addition to funding patients’ medical treatment and providing support services, BCMF also provides patients with food and accommodation for as long as they are undergoing treatment.